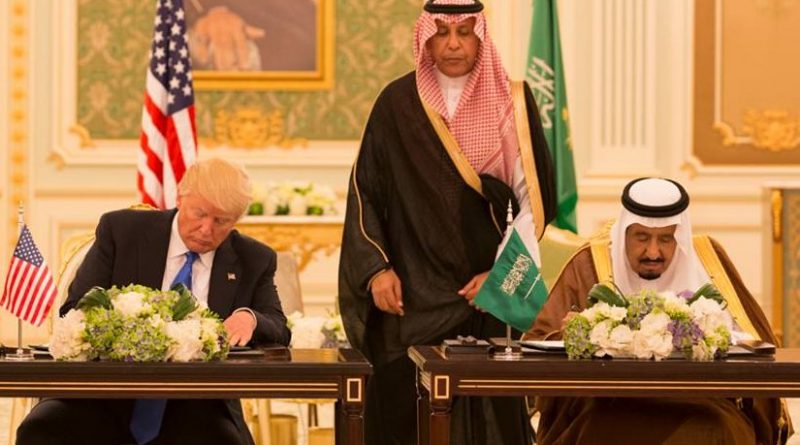 US President Donald Trump made an arms deal valued at $110 billion with Saudi Arabia during his recent visit to this country a few weeks ago. The British government had made a similar arms deal with Saudi Arabia a few months earlier. These deals have been discussed as economic deals and been argued for because they could create jobs in the US and the UK. There are also some analysts who argue that these deals make a US ally, Saudi Arabia, stronger in the Middle East. However, since there are major differences between dealing in weapons and other commodities, arms deals cannot be considered as a common business. Therefore, the deal with Saudi Arabia cannot be considered as an ordinary transaction and needs to be more elaborated on due to its consequences and downsides. The most significant aspect of the deal is that in the long run, it will not be in the best interest of Americans and here are some reasons.

One might argue that these weapons are sold to provide the region with security and are meant for self-defense. However, the history of Saudi Arabia, including the way it uses weapons, does not back that argument.

Historically speaking, Saudi Arabia has mainly used its weapons to launch wars or support extremist groups. Saudis supported the former Iraqi dictator, Saddam Hussein, by supplying him with weapons and money during his invasion of Iran in the 1980s. That war lasted eight years and resulted in the loss of hundreds of thousands of lives on both sides. A more recent instance is Saudi Arabia’s military intervention in Yemen. Saudi Arabia is responsible for funding extremist groups in Iraq, Syria, Afghanistan and Libya as well.

As a result of these conflicts, cities and homes are destroyed, families are torn apart, and people are killed and displaced. Survivors flee and try to get to safer areas in other countries. Many of them risk their lives in small boats to get to Europe and live as immigrants; a life, which will be neither easy for them, nor for citizens of the host countries. People in the host countries are afraid of newcomers and are uncomfortable around them. The fear is so strong that it even impacts politics, particularly elections, in European countries as well as the United States. Thus, a war in a region impacts not only lives of people in that region, but also, due to its domino effect, affects the rest of the world. No place will be safe from the harmful impact of wars fought with these weapons, which are supplied to regional countries now.

In addition to their international effect, such deals impact domestic politics in the buyer country as well. An example to the point is Iran’s arms deals with the US during the 1970s. Saudi Arabia is currently similar to what Iran was before the 1979 Islamic Revolution in many aspects, including in terms of its relationship with the US and the type of its political regime. Back then, Iran was a US ally in the region. Iran had an authoritarian king (known as Shah), quite similar to the current regime in Saudi Arabia. Iran’s Shah spent the country’s petrodollars to buy modern weapons from the United States (and other Western countries) while many Iranians were living in poverty. They were dissatisfied with these arms purchases due to the waste of money. The Iranian regime was a dictatorship and protesters could not have a say or impact the country’s policies.

At the same time, various groups, including the clergy, led by Ayatollah Rouhollah Khomeini, condemned Shah’s arms deals with Washington as a proof of his dependence on the United States and argued that the Shah was buying weapons so he could maintain his power. They made many references to these deals in their rhetoric against the Shah and finally succeeded to mobilize dissatisfied people and overthrew the Shah. A few months later, a hostage crisis, involving the former US embassy in Tehran, took place in the country, which led to total severance of diplomatic relations between Iran and the US. Missing Iran as a US ally at the height of the Cold War in 1979 and the subsequent hostage crisis were disastrous for the US.

Saudi Arabia is very likely to go down the same path. Citizens of Saudi Arabia don’t have a say on their country’s policies, but it does not mean that they don’t have any opinions regarding their government’s behavior, particularly with regard to how their petrodollars are spent.

In such country, arms deals could potentially lead to a twofold dissatisfaction. First of all, people are dissatisfied because the money, which can be used to change the quality of their life, is being used to purchase weapons. This budget can make a change in the lives of millions of poor Saudi citizens. Of course, when it comes to figures on the severity of poverty in Saudi Arabia, there are no accurate statistics available to various organs of the United Nations, because Riyadh usually keeps such statistics secret. For example, in 2011 and at the height of the Arab Spring uprisings, Riyadh sent a group of journalists, who had released a report on poverty in this country, to jail. However, there are reports, which show that about 25 percent of Saudi Arabia’s citizens live below the poverty line. Therefore, in view of dissatisfaction of poor Saudi citizens with their livelihood state, purchasing billions of dollars worth of weapons from the United States by Saudi Arabia, which is tantamount to creating jobs for Americans, is quite concerning.

Social grievances and dissatisfactions could turn into social anger and result in some form of action. Arab Spring uprisings were actually struggles by disappointed and frustrated people to overthrow corrupt and dictatorial regimes, and the Saudi government is no exception to that rule. As a result, angry people are possible to target the foreign sponsors and suppliers of the dictatorial regime as well. Therefore, it is no surprise that terrorists behind September 11, 2001, attacks in the United States were citizens of countries, which were considered as US allies, including Saudi Arabia and Pakistan. A review of opinion polls conducted on the image of the United States among citizens of US allies in the Middle East backs this argument.

In addition to the generation of anger and hatred among citizens of the country that buys weapons from foreign states, arms deals have an impact on terrorist groups’ recruitment in the region as well. Purchased weapons are usually used to destroy homes and kill people in other countries and make the victims quite hostile and furious. This is not rocket science, but it is a simple logic, which says victims of such attacks try their best to harm the sources of their suffering in addition to their supporters. Therefore, they form or join violent groups to organize retaliation.

All in all, such arms deals have a negative impact on the current order not only in the Saudi kingdom, but also in the entire region and even the rest of the world. Peace, security, and stability are internationally interrelated and the situation in one region can easily influence the entire world. As terrorist attacks across the world, including in such major cities and regions as New York, California, Florida, London, Paris, Moscow, Baghdad, Karachi, and recently Kabul have showed, there are no safe and secure regions immune to terrorism in the world. Thus, it is imperative to look for comprehensive and long-term solutions to this problem and since political instability, regional wars and terrorism are fed by weapons, any such solution must take arms deals into account as well.

Reference:
*Saudi dissidents turn to YouTube to air their frustrations:
http://www.mcclatchydc.com/news/nation-world/world/article24719977.html
*Saudi Arabia’s riches conceal a growing problem of poverty:
https://www.theguardian.com/world/2013/jan/01/saudi-arabia-riyadh-poverty-inequality
*Military airplanes and helicopters account for the lion’s share of Saudi Arabia’s most recent arms deal with the United States. In addition to them, Riyadh is purchasing warships, tanks, and precision-guided bombs, which are all considered as military equipment and play an important part in wars of aggression.

By Dr. Adil Rasheed* Terrorism often hides behind the cover of individual and religious freedoms to attack liberal democracies. It

Coasts Drown As Coral Reefs Collapse Under Warming And Acidification