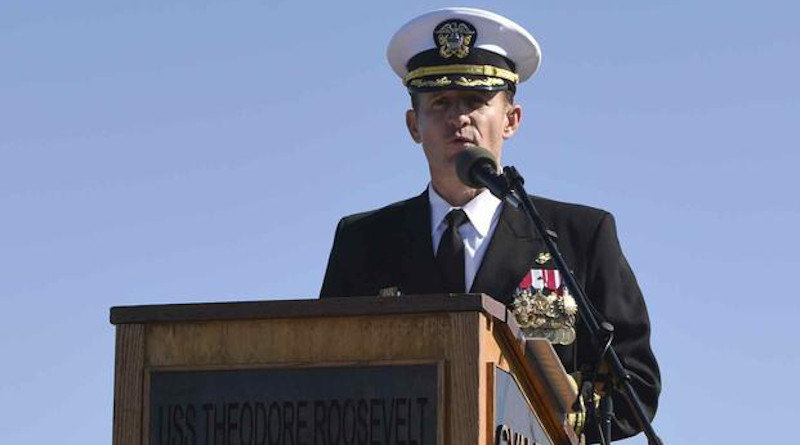 Following the release of a report into the events surrounding an outbreak of COVID-19 on the aircraft carrier USS Theodore Roosevelt, Navy Capt. Brett E. Crozier, the ship’s former commander, will not be reinstated, Navy Adm. Michael M. Gilday, chief of naval operations said at a Pentagon news conference.

Based on facts found in the report, which Gilday and Navy Secretary Kenneth J. Braithwaite characterized as both thorough and fair, Gilday said his initial recommendation that Crozier reinstated was proven wrong.

Crozier will not be reassigned as the commanding officer of the USS Theodore Roosevelt, nor will he be eligible for future command opportunities. Instead, he will be reassigned to other work.

“Captain Crozier’s primary responsibility was the safety and the well-being of the crew, so that the ship could remain as operationally ready as possible,” he said. “In reviewing both Admiral Baker and Captain Crozier’s actions, they did not do enough, soon enough, to fulfill their primary obligation.”

Both Crozier and Baker failed to move sailors off the aircraft carrier as quickly as they could have, and failed to move them to a safer environment more quickly, Gilday said. Additionally, he said, Crozier “exercised questionable judgment when he released sailors from quarantine on the ship, which put his crew at higher risk and may have increased the spread of the virus aboard the Theodore Roosevelt.”

Crozier was relieved of duty April 2 following the leak of a letter he wrote to those higher up in his chain of command. In the letter, he asked for more assistance in dealing with the outbreak of COVID-19 on the ship. Gilday said it is the findings of the more detailed investigation, rather than the existence of the leaked letter, that have prevented Crozier from being reinstated as commander of the Roosevelt.

“As Captain Crozier stated in his email, he should have been more decisive when the ship pulled into Guam,” Gilday said. “He also said that he was ultimately responsible for his ship and his crew. And I agree. In the end, the email and the letters sent by Captain Crozier were unnecessary. Actions were already underway to acquire [Centers for Disease Control and Prevention]-compliant off-base hotel rooms for the crew before he sent that email.”

Gilday said it’s rare for ship commanders to directly communicate as high up in their chain of command as Crozier did.

At the time the letter was sent, Gilday said, the Navy already had made arrangements for off-ship lodging for Roosevelt sailors.

Braithwaite said he’s satisfied with the depth and fairness of the report, and its conclusions.

“I am satisfied that it was conducted in an extremely thorough and fair manner,” he said. “Moreover, I fully support its findings and recommendations, and I’d like to take this time to commend the investigation team led by [Adm. Robert P. Burke] under the direction of our chief of naval operations [on the work that they did, under very demanding conditions.”

“Their outstanding efforts greatly contributed to the health, safety and recovery of the crew of USS Theodore Roosevelt,” Braithwaite said.

Braithwaite also expressed condolences for Navy Chief Petty Officer Charles Robert Thacker Jr., a USS Theodore Roosevelt aviation ordnanceman, who died April 13 of COVID-19. He was the only sailor aboard the Roosevelt to die from COVID-19.