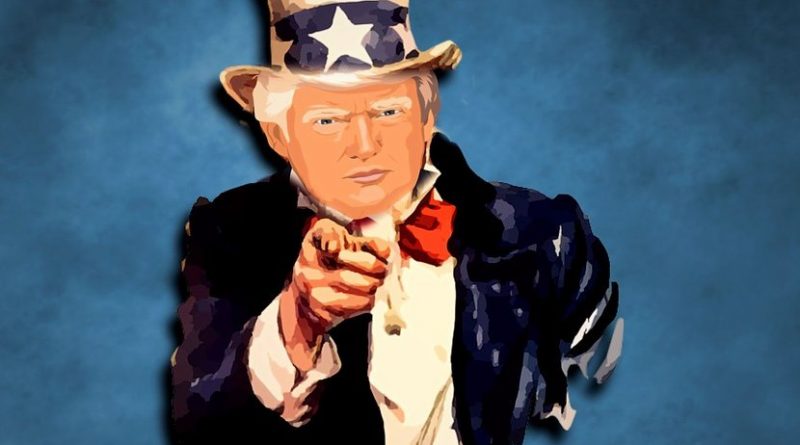 President Trump recently returned to one of his dirty old tricks, tweeting on last Sunday morning that “The Squad” should “go back and help fix the crime infested places from which they came.” The Squad consists of Alexandria Ocasio-Cortez, Ilhan Omar, Rashida Tlaib and Ayanna Pressley, the inaugural four Justice Democrats (a new Democratic Party wing that rejects all corporate and oligarchic campaign donations) elected to the House last year.

Predictable chaos ensued. The Democratic Party and media (correctly) called out the president’s blatant racism tweeted at the four women-of-color Congresswomen. All but a handful of Republicans and conservative pundits either outright defended the Tweeter-in-Chief or obfuscated. Trump doubled down on his sentiments, stating at a campaign rally in Greenville, NC in regards to the Muslim immigrant Rep. Ilhan Omar that, “You say al-Qaeda, it makes you proud, al-Qaeda makes you proud!” Trump’s voter base gleefully ate up his dog-whistle ploy. At the aforementioned rally, supporters chanted, “Send her back!” as Trump was denigrating Ilhan Omar; Trump also experienced a 5% boost in his approval rating among Republicans polled in the immediate aftermath of the tweet.

On a surface, Trump’s racist attacks on the four Justice Democrats make no sense. The Justice Democrats had been in the midst of a long, ugly internal battle with the Democratic Party establishment, and most particularly with the top Democrat in the nation, Speaker of the House Nancy Pelosi, at the time. Speaker Pelosi back in February went so far as to accuse the Muslim Minnesotan Ilhan Omar of making, “use of anti-Semitic tropes,” while criticizing the political influence of conservative Israeli lobbyist groups like AIPAC. Telling The Squad to go back where they came from united the whole Democratic Party, who, under Speaker Pelosi, passed a House bill condemning the tweet. The tweets are also objectively repulsive to the consistent 3/5 majority of the country who haven’t drunk the Orange Kool-Aid.

Once you dig beneath the surface however, Trump’s media savvy shines through. Time after time, Trump has used outrageous statements to distract from substantive controversies. The president’s latest controversy is currently overshadowing things like his deep personal connections to the exposed pedophile ring of Jeffrey Epstein and the further sexual and physical exploitation of children at migrant detention camps by Trump’s Administration. Fellow Republicans also benefit from the puppet show. For instance, Sen. Rand Paul can use the tweet to distract from the fact that he’s choosing to block the 9/11-victim compensation bill. William Barr, Wilbur Ross, and Kellyanne Conway aren’t facing the media and Congressional scrutiny that they deserve for criminal contempt.

The Democrats, per usual, have fallen for the Trump Trap. In the midst of the tweet, they’ve tripped over themselves to vote on two meaningless bills of condemnation. Establishment Party figures still haven’t grasped the fact that public decorum has been completely obsolete for three years now. Trump has made any and all public discourse palatable in America. The people who were offended by Trump’s racist attack of four Congresswomen already knew Trump’s true colors; in a week or two, they will forget all about this particular incident. By contrast, Republican voters are delighted by Trump’s theatrics. The president has fully perfected his personality cult; every insidious Twitter crumb he throws to his base invigorates them.

The only way that the Democrats can hope to defeat Trump in 2020 is to offer a competing vision for the country, not hope that the president’s supporters magically start to care that he’s verbal-diarrhea incarnate. Ironically, this is one of the existential problems that The Squad and the establishment Democrats were fighting over before the tweet-storm. Reps. Omar, Tlaib, Pressley and most particularly Ocasio-Cortez were facing pushback from centrist party bosses like Speaker Pelosi for offering bold proposals like a Green New Deal, a $15 national minimum wage and a comprehensive (not watered-down) version of Medicare for All. Ilhan Omar has voiced rare criticism of American imperialist meddling in places like Venezuela and the Middle East, which has turned her into a pariah in her own party.

The establishment Democrats’ status-quo policy of finger-wagging at Trump’s buffoonery, going along with much of the Republican legislative agenda (like a watered-down version of a humanitarian bill for detained migrants and approving of Trump’s far-right judicial nominees) and quashing anything remotely innovative, like Medicare for All, will likely ensure Trump’s reelection. If Democrats don’t oppose Trump with policies and anti-Trump policy critiques, then the president will happily continue to play Wag-the-Dog, using well-timed tweets from now until Nov 2020.