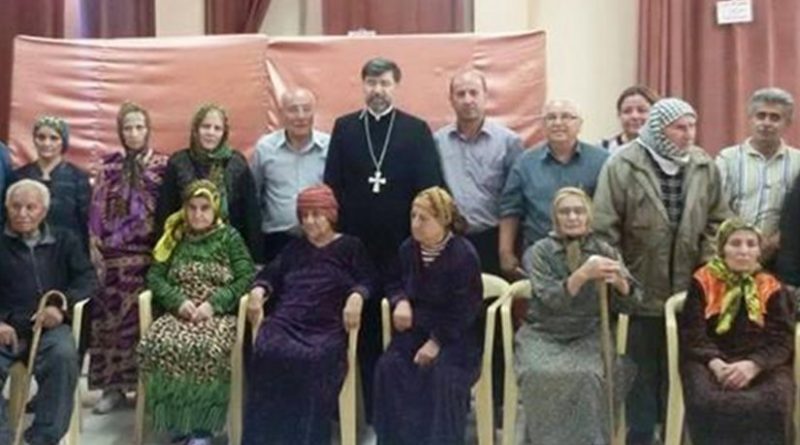 Some of the 22 elderly Assyrians released by ISIS on 11 August www.aina.org

Five weeks after Fr. Antoine Boutros and his driver were kidnapped on their way to Sunday mass in southern Syria’s Suweida province on July 12, the Catholic parish priest has been released.

Disclosure of the 50-year-old priest’s release on Aug. 15 came from the Melkite Greek Catholic Patriarch of Antioch, Gregory III Laham, who gave no further details.

According to the Rome-based Zenit News Agency, the identity of Fr. Boutros’ kidnappers remains unknown, along with the fate of his driver. A rash of abductions occurred during July in the Suweida region, which is under the control of the Syrian army, but plagued by local brigands and a number of Islamist jihadi factions. Islamic State sources had not claimed responsibility for Fr. Boutros’ kidnapping.

Still unconfirmed are the fates of Italian Jesuit Fr. Paolo Dall’Oglio and Syrian Catholic Fr. Jacques Mourad, abducted July 2013 and May 2015, respectively. Nor has credible evidence surfaced regarding Archbishop Boulos Yazigi and Youhanna Ibrahim of Aleppo, kidnapped more than two years ago.

The captives, 14 of them women, were sent on a bus to a highway outside Hassaka city, according to an announcement Aug. 11 by Afram Yacoub, chairman of the Assyrian Federation of Sweden.

“Negotiations between Assyrian leaders and Sunni leaders who have pledged allegiance to ISIL have been taking place, and following an agreement they were released. No ransom was paid to ISIL through any negotiations,” Yakoub stressed.

“We believe they released them because of health issues and because they are old,” Yakoub told the New York Times. Archimandrite Emanuel Youkhanna of the Assyrian Church of the East agreed, confirming by telephone to World Watch Monitor that the church’s bishopric in Hassaka city had not paid ransoms to the jihadists to secure the elderly Christians’ release.

But the Syrian Observatory for Human Rights claimed that a ransom had been paid. The dispute prompted speculation that funds might have gone to the tribal negotiators, rather than to the Islamic State itself.

Another activist group, the Assyrian Observatory for Human Rights, credited the release to “the tireless efforts and negotiations by the Assyrian Church of the East in the city of Hassaka.”

According to the Assyrian International News Agency, to date 48 of the 253 Khabur hostages initially captured in the IS attacks in February have now been released.

The location and condition of the remaining 205 Christians still believed to be held by IS are not confirmed, although negotiations are ongoing.

Yacoub noted that the recently released prisoners had not been physically harmed. “ISIL separated the men from the women and children, and crammed them all into very small rooms. They were fed disgusting and inedible food,” he said. “During their captivity, ISIL tried to convince them to convert to Islam.”

From Sweden, an Assyrian relative of three of the newly released hostages described the difficult conditions they had suffered as “slaves of ISIS” during their captivity.

“They have not been able to take care of their hygiene and they are full of lice,” Sabah Elijah told Lanstidningen newspaper, as reported by the Assyrian International News Agency. “They have not received food every day either, but perhaps only every other day. Those released will not disclose everything, because they have relatives who are still in the hands of ISIS. They said they have gone through hell.”

“My relatives now live with an aunt,” she said. “But what happens next? What will they live on? They had everything before ISIS came. Now they have nothing.”

Back in June, many Christians and other religious minorities had taken refuge in Qaryatain and the nearby Christian villages of Hawwarin and Sadad, after IS made large-scale military advances against towns and villages in northern Aleppo province.

So while IS extremists were routing the Syrian army out of Qaryatain, church sources said an estimated 1,500 Assyrian Christian families managed to flee ahead of them into nearby Christian villages and on toward Homs, 65 miles away.

Initial figures released by the Syrian Observatory for Human Rights (SOHR) on August 7 indicated that at least 230 people had been taken captive in Qaryatain, among them dozens of Christians. Some had taken refuge in the city’s Mar Elian Monastery, where Fr. Jacques Mourad had been abducted by masked gunmen in May.

According to a Syrian priest contacted by the New York Times, “some [of the captives] had been taken away by the Islamic State, while others had been forced to remain in their homes.”

Without explaining the source, The Guardian published a photograph on Aug. 7 of a handwritten “wanted list,” purportedly naming some of the captured Christians tracked down by IS as “suspects” in Qaryatain.

Syriac Orthodox Bishop Selwanos Boutros Alnemeh told Al-Alam News Network from Homs that the IS fighters “accused the Christian families of backing the regime.” Located between Damascus and ancient Palmyra, the world heritage site captured by IS in May, Qaryatain is a key vantage point for the Islamic State’s eventual attempts to take over Damascus. Today (Aug 19) came reports that the 82-year-old archaeologist protecting Palmyra had been beheaded on Tuesday by ISIS.

In an interview with Vatican Radio, Chaldean Bishop of Aleppo Antoine Audo called the Qaryatain kidnappings an IS strategy to show their power and military dominance and “spread terror everywhere.” IS wants to destroy Syria’s Christian communities, Bp. Audo said, so the militants were trying to “push the Christians to emigrate.”

In a development described as “strange” by cautious church officials, a recent Youtube video and several photographs posted online have displayed Assyrian men and women believed to be among the IS hostages captured from Hassaka’s Khabur villages in late February.

Three pictures of individual women show them holding up a sign with their names written in Arabic and the date listed below: July 27, 2015. Assyrian sources confirmed that the two legible names, Susan Elias and Hannaa Assaf Youseef, are common names found in the Assyrian community, but could not confirm the exact identity of the women. The name of the third woman, who was pictured with three small chidren, was illegible.

A Youtube video which appeared online Aug. 14 features eight Assyrian men who begin by saying, “I am Christian,” and then each recited in Arabic his name, date of birth and home village. All were confirmed by Assyrian sources to be from Tel Jazira or Tel Shamiram, where IS took some 160 hostages. The last of the eight men read a written appeal: “We are here with our families, and we call on human rights organizations for help.”

In contrast to previous IS propaganda releases, neither the men’s video nor the three photographs were distributed by IS media channels. Nor did the releases include any ransom demand.

“No ISIS fighter appears in the video, but the last man clearly says ‘we call on the international community to secure our release.’ But he does not say anything about ransom,” noted Assyrian Federation of Sweden spokesman Yakoub.

“The church is very cautious about these recently released photos and video,” Fr. Youkhana from the Assyrian Church of the East told World Watch Monitor. “The men for sure we know are from the Khabur villages. But this is very strange, coming this way from ISIS.”

The Islamic State currently controls more than 50 percent of Syrian territory, with the August capture of Qaryatain marking the jihadists’ largest advance since overtaking Palmyra in May.

World Watch Monitor Agency reports the story of Christians around the world under pressure for their faith.