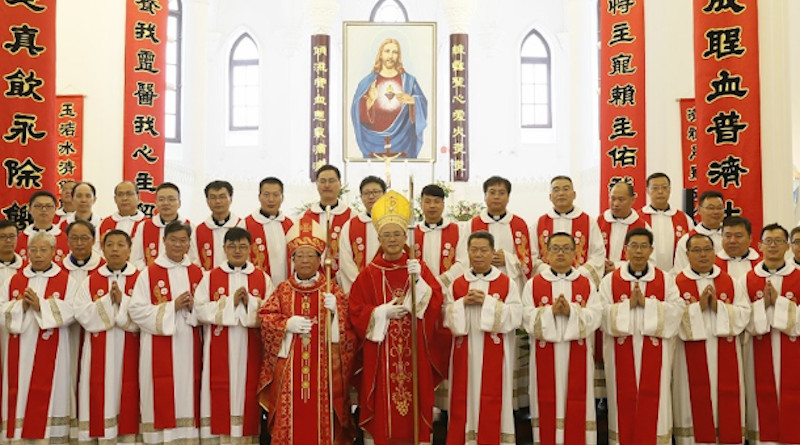 Bishops and priests pose for a photograph after the installation of Bishop Jin Yangke of Ningbo Diocese in Zhejiang province on Aug. 18. (Photo supplied)

The state-sanctioned Catholic Church in China has installed another bishop in a tightly controlled ceremony, making him the sixth bishop installed since the Vatican and China signed a pact on bishops’ appointments two years ago.

Officials of the Chinese Catholic Patriotic Association (CCPA) and Bishops’ Conference of Catholic Church in China (BCCCC) led the installation ceremony of Bishop Jin Yangke of Ningbo Diocese in Zhejiang province in eastern China on Aug. 18.

“The ceremony was very strictly controlled, with only priests, nuns, officials and relatives of the bishop inside,” said a Catholic who waited outside the church.

About 150 people were allowed to attend the ceremony, including some 30 priests and 30 nuns.

The installation of 62-year-old Bishop Jin is believed to be the result of negotiations since the Vatican-China pact was signed in September 2018.Bishop Jin belonged to the state-approved open church but his predecessor Bishop Mathew Hu Xiande, a Vatican-appointed bishop, ordained him secretly as coadjutor bishop in 2012.

Bishop Hu held the ordination in secret because he did not want the ordination to be “contaminated” by the presence of any “illegal” bishops, a church source told UCA News.

When Bishop Hu died in 2017, Bishop Jin took over the diocese and continued as its bishop, although he was not publicly ordained or installed as a bishop.

The latest installation makes Bishop Jin the head of Ningbo Diocese, approved by the Chinese state and the Vatican, the source said. A church observer told UCA News that three different types of bishops have been installed publicly since the agreement was signed.

In the first group, underground bishops were installed as bishops of the open church after approval by authorities.

The second group comprised underground priests who turned to the open church and were later secretly ordained with Vatican approval.

The third group were open church priests who were ordained secretly as bishops with the Vatican’s mandate.

Bishop Jin’s case is an example of the third category. He was already a priest and bishop of the open church, heading a diocese without any public ordination or installation. The latest ceremony validates his position, the observer said.

The church observer said all three categories have something in common: “They were all secretly appointed and ordained with a Vatican mandate before the agreement.”

At the ceremony, Bishop Jin’s letter of approval was read out by Father Yang Yu, deputy secretary-general of the BCCCC and CCPA.

Bishop Jin made a solemn vow to lead the diocese to abide by China’s constitution, uphold the unity of the motherland and social harmony, and love the country and the Church.

He also vowed to insist on the Church’s autonomy, adhere to the direction of Chinese Catholicism in China, and contribute to the realization of the “Chinese dream of the great rejuvenation of the Chinese nation.”

Born in 1958, Bishop Jin graduated from the Sheshan Seminary in Shanghai and has served the Diocese of Ningbo since his priestly ordination in 1990.