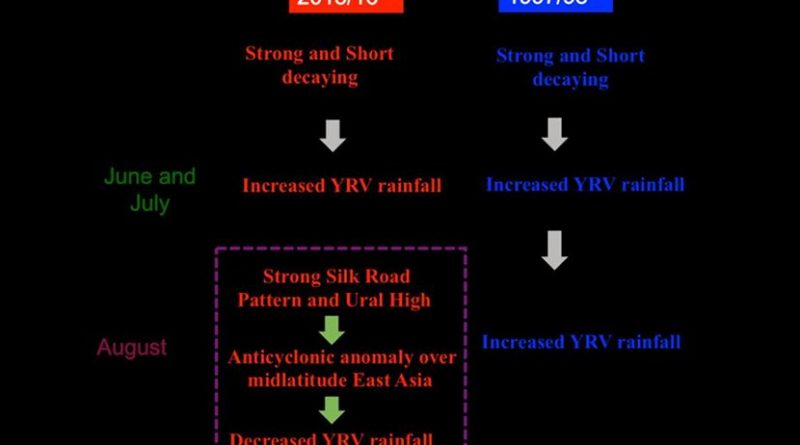 It is widely recognized that rainfall over the Yangtze River valley (YRV) strengthens considerably during the decaying summer of El Niño, as demonstrated by the catastrophic flooding suffered in the summer of 1998.

Nevertheless, the rainfall over the YRV in the summer of 2016 was much weaker than that in 1998, despite the intensity of the 2016 El Niño having been as strong as that in 1998. A group of scientists from the Institute of Atmospheric Physics, Chinese Academy of Sciences, have now revealed the remarkable role played by the mid-latitude circulation in this surprising feature.

“The different nature of the YRV between these two super El Niño years was caused by the sub-seasonal variation, principally in August,” said Dr. Chaofan LI, first author of the study. “We found that the YRV rainfall anomaly was clearly negative in August 2016, which was opposite to that in August 1998, and different to June and July.”

Remarkable midlatitude circulation anomalies, including the anomalous “Silk Road Pattern” (an anomalous zonal wave-like teleconnection pattern in the upper-troposphere along the Silk Road) and anomalous geopotential height over the Urals region, occurred in August 2016, which were strongest in the latest 40 years, but quite weak in August 1998.

These anomalies would have resulted in significant anticyclonic circulation anomalies over midlatitude East Asia, reducing the climatological wind and further giving rise to the negative YRV rainfall anomaly in August 2016.

“Given the unique sub-seasonal variation of the YRV rainfall in summer 2016, more attention should be paid to midlatitude circulation — besides the signal in the tropics — to further our understanding of the predictability and variation of YRV summer rainfall.” LI suggests.