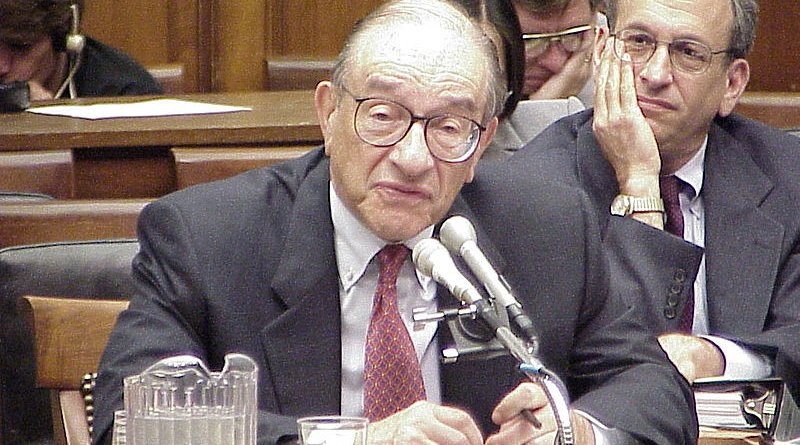 That is undoubtedly the question that readers of Robert Samuelson’s column on negative interest rates are asking. At one point Samuelson tells readers:

“No less a figure than former Federal Reserve chairman Alan Greenspan has suggested that it’s just a matter of time before negative rates come to the United States.”

For folks too young or too old to remember, Alan Greenspan was chair of the Fed as the housing bubble grew to ever larger dimensions. He insisted everything was just fine, in fact, he even co-authored several papers touting the fact that people were spending based on the housing equity created by the bubble. There is no one who deserves more blame for the Great Recession, the largest economic disaster since the Great Depression, than Alan Greenspan.

But apart from his selection of authority figures, there is a more basic problem with Samuelson’s piece: it doesn’t make any sense. We sort of get the idea that he doesn’t like negative interest rates, but it’s not really clear why. The confusion shows itself most clearly in the concluding paragraph:

“The larger issue here is barely discussed — the dependence of U.S. economic growth on constant doses of “stimulus,” whether bloated budget deficits, super-low interest rates or negative rates. Their waning effectiveness raises hard questions of whether the economy can achieve adequate growth on its own.”

Okay, for folks keeping score at home, the first question we should be asking when we look at the macroeconomy is whether the issue is too much demand or too little demand. For folks like Robert Samuelson, who constantly whine about budget deficits, the problem should be too much demand.

Their story is that budget deficits are creating too much demand in the economy, forcing the Fed to either raise interest rates, and thereby crowd out investment and slow productivity growth, or alternatively to allow the economy to become overheated and generate inflation. Clearly this story cannot describe the current economy, where inflation remains well below the Fed’s 2.0 percent target, even as interest rates remain at historically low levels.

The other story is too little demand, which seems to be the case now. This is sort of what Samuelson is getting at in his last paragraph, but the implication is of course that “bloated” budget deficits are not a problem. If budget deficits were smaller then we would see less demand and less growth, and more unemployment. Again, we know that Robert Samuelson doesn’t like budget deficits (I don’t like chocolate ice cream), but that has nothing to do with the issue at hand.

It is also worth having some fun with his comment about the economy achieving adequate growth “on its own.” There is no “on its own,” which should be obvious to fans of economics everywhere.

Suppose the government didn’t grant patent and copyright monopolies, would we see the same amount of investment in research and development and intellectual products? Presumably, we would not. (Pharma and the others may exaggerate the incentive effect here, but it obviously is not zero.) Direct spending is one way the government directs economy activity and boosts spending, but it is not the only way. People writing about economics for major news outlets should know this.

Home » Is There Any Lesser Authority Than Alan Greenspan? – OpEd