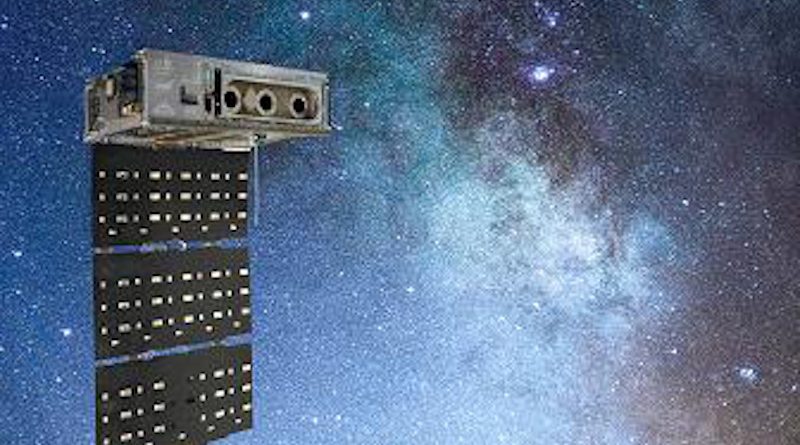 A mini satellite designed and built at the University of Iowa has determined the Milky Way galaxy is surrounded by a heated, clumpy halo of gas that is continually being supplied by birthing or dying stars in our galaxy. CREDIT: Blue Canyon Technologies

The Milky Way galaxy is in the recycling business.

University of Iowa astronomers have determined our galaxy is surrounded by a clumpy halo of hot gases that is continually being supplied with material ejected by birthing or dying stars. This heated halo, called the circumgalactic medium (CGM), was the incubator for the Milky Way’s formation some 10 billion years ago and could be where basic matter unaccounted for since the birth of the universe may reside.

The findings come from observations made by HaloSat, one of a class of minisatellites designed and built at Iowa–this one primed to look at the X-rays emitted by the CGM. The researchers conclude the CGM has a disk-like geometry, based on the intensity of X-ray emissions coming from it. The HaloSat minisatellite was launched from the International Space Station in May 2018 and is the first minisatellite funded by NASA’s Astrophysics Division.

Each galaxy has a CGM, and these regions are crucial to understanding not only how galaxies formed and evolved but also how the universe progressed from a kernel of helium and hydrogen to a cosmological expanse teeming with stars, planets, comets, and all other sorts of celestial constituents.

HaloSat was launched into space in 2018 to search for atomic remnants called baryonic matter believed to be missing since the universe’s birth nearly 14 billion years ago. The satellite has been observing the Milky Way’s CGM for evidence the leftover baryonic matter may reside there.

To do that, Kaaret and his team wanted to get a better handle on the CGM’s configuration.

More specifically, the researchers wanted to find out if the CGM is a huge, extended halo that is many times the size of our galaxy–in which case, it could house the total number of atoms to solve the missing baryon question. But if the CGM is mostly comprised of recycled material, it would be a relatively thin, puffy layer of gas and an unlikely host of the missing baryonic matter.

“What we’ve done is definitely show that there’s a high-density part of the CGM that’s bright in X-rays, that makes lots of X-ray emissions,” Kaaret says. “But there still could be a really big, extended halo that is just dim in X-rays. And it might be harder to see that dim, extended halo because there’s this bright emission disc in the way.

“So it turns out with HaloSat alone, we really can’t say whether or not there really is this extended halo.”

Kaaret says he was surprised by the CGM’s clumpiness, expecting its geometry to be more uniform. The denser areas are regions where stars are forming, and where material is being traded between the Milky Way and the CGM.

“It seems as if the Milky Way and other galaxies are not closed systems,” Kaaret says. “They’re actually interacting, throwing material out to the CGM and bringing back material as well.”

The next step is to combine the HaloSat data with data from other X-ray observatories to determine whether there’s an extended halo surrounding the Milky Way, and if it’s there, to calculate its size. That, in turn, could solve the missing baryon puzzle.

“Those missing baryons better be somewhere,” Kaaret says. “They’re in halos around individual galaxies like our Milky Way or they’re located in filaments that stretch between galaxies.”

Home » The Milky Way Galaxy Has A Clumpy Halo