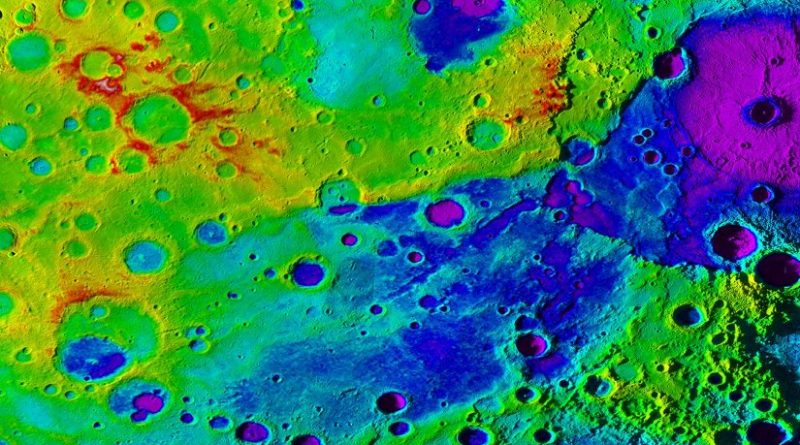 A newly discovered giant valley on the planet Mercury makes the Grand Canyon look tiny by comparison. Located by scientists at the University of Maryland, the Smithsonian Institution, the German Institute of Planetary Research and Moscow State University, the expansive valley holds an important key to the geologic history of the innermost planet in our solar system.

Discovered using stereo images from NASA’s MErcury Surface, Space ENvironment, GEochemistry, and Ranging (MESSENGER) spacecraft, the “great valley” lies in the planet’s southern hemisphere and overlaps the Rembrandt Basin–a large crater formed by a relatively recent impact from an asteroid or other such body. But the “great valley” formed in a much different way, according to a research paper published online November 16, 2016 in the journal Geophysical Research Letters.

Unlike Earth, which has a crust and upper mantle (collectively known as the lithosphere) divided into multiple tectonic plates, Mercury has a single, solid lithosphere that covers the entire planet. As the planet cooled and shrank early in its history, roughly 3-4 billion years ago, Mercury’s lithosphere buckled and folded to form the valley, much like the skin of a grape folds as it dries to become a raisin.

“This is a huge valley. There is no evidence of any geological formation on Earth that matches this scale,” said Laurent Montesi, an assistant professor of geology at UMD and a co-author of the research paper. “Mercury experienced a very different type of deformation than anything we have seen on Earth. This is the first evidence of large-scale buckling of a planet.”

The valley is about 250 miles wide and 600 miles long, with steep sides that dip as much as 2 miles below the surrounding terrain. To put this in perspective: if Mercury’s “great valley” existed on Earth, it would be almost twice as deep as the Grand Canyon and reach from Washington, D.C. to New York City, and as far west as Detroit.

More notable than its size, according to Montesi, is how the valley most likely formed and what that reveals about Mercury’s geologic history.

The valley’s walls appear to be two large, parallel fault scarps–step-like structures where one side of a fault moved vertically with respect to the other. Both scarps plunge steeply to the flat valley floor below. According to Montesi and his co-authors, the best explanation is that Mercury’s interior cooled rapidly, forming a strong, thick lithosphere. The entire floor of the newly discovered valley is one giant piece of this lithosphere that dropped between the two faults on either side.

This would make sense if, like most planets, Mercury has been steadily cooling since its formation. But Montesi notes that there are several clues to suggest that Mercury went through a more recent period of warming. This analysis, if true, would upend some time-tested assumptions about Mercury’s geologic past.

“Most features on Mercury’s surface are truly ancient, but there is evidence for recent volcanism and an active magnetic field. This evidence implies that the planet is warm inside,” Montesi said. “Everyone thought Mercury was a very cold planet–myself included. But it looks like Mercury might have heated significantly in recent planetary history.”