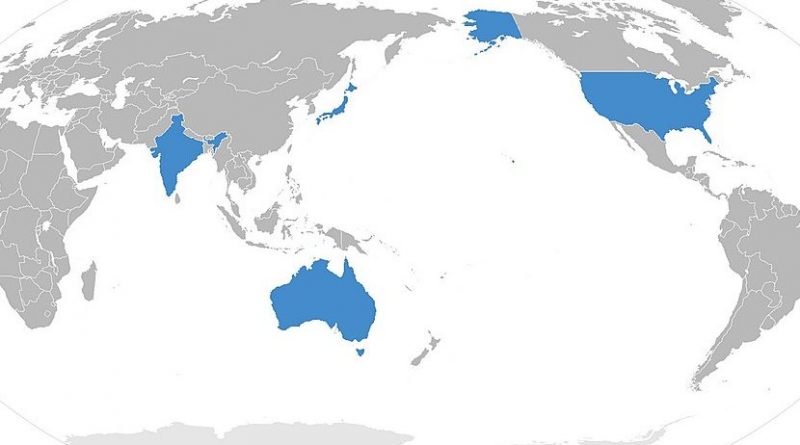 India for all purposes is virtually a full-fledged and active proponent of the Indo Pacific strategic grouping ‘The QUAD’ comprising United States, Japan, Australia and India but India imparts it with muted diplomatic tones so as not to raise China’s hackles against which ‘The QUAD’ is pointedly intended at and structured for in operational concepts.

History of the preceding Century vividly provides political lessons that when authoritarian Revisionist Powers challenge the established world order and endanger global security, the democratic nations are slow to react and coalesce belatedly at a later stage at greater lives lost and material damage to combat emerging threats.

India cannot shy away from employing balance of power strategic options to manage the threats to its national security in the form of individual threats from China and Pakistan and the emergence of the Dual Military Threat of the China-Pakistan Axis. India itself needs to recall the military lessons of following the unrealistic ‘Non-Alignment Mantra’ as an instrument of State-policy.

‘The QUAD’ as an inescapable strategic imperative arises from two glaring strategic reality checks in terms of India’s national security and both these security challenges emanate from China figuring high in India’s military threat perceptions. In recent decades despite India’s accommodative stances on China there are no matching responsible responses from China.

On the contrary, China’s military confrontation against India on the Himalayan Heights that separate India from China Occupied Tibet stands enhanced with attempts at political and military coercion of India. Yet another serious dimension stands added to the China Threat to India with the emergence and concretisation of the China-Pakistan Axis aimed at posing a Dual Military Threat to India.

In short, China continues to pose a serious and potent military threat to India both in terms of geopolitical intentions and aggressive military capabilities as was manifested in the Dokalam Military Standoff of 2018.

The second stark reality challenging India is that despite the recent military surge in defence and military buildup under PM Modi to improve India’s military war preparedness against potential military threats against India, another ten years of sustained buildup of military capabilities would be required for India to counter the China Threat on a ‘Stand Alone’ capability including the more subtle Hybrid Warfare Threat by the China-Pakistan Axis.

Both the factors outlined above place an urgent call on India in terms of managing the China Threat in collaboration and cooperation with like-minded Major Powers’ sharing convergent strategic concerns on the potential China Threat. ‘The QUAD’ is a viable and inescapable option till such time India is able to forge a ‘Stand Alone’ strategic and military capability to credibly deter China from its brinkmanship activities against India.

In terms of substantive strategic partnerships India is tied up with the United States and Japan in bilateral Special Strategic Partnerships with global manifestations. In terms of Australia, one has witnessed an active surge of security and defence cooperation. The United States, Japan and Australia already enjoy bilateral security alliances. So what emerges in reality is that ‘The QUAD is already functional when these enmeshing security linkages of the United States, Japan, Australia and India are added together.

‘The QUAD’ may currently not be an integrated security alliance with structured mechanisms like NATO but effectively at present is a loose and flexible coalition with convergent strategic perceptions of Asian Security and Indo Pacific Security challenges more specifically.

The  question that then arises is as to what security challenges prompt these four Major Powers of Indo Pacific to coalesce in a presently informal security-oriented coalition?

Obviously, the major challenge to Asian Security and Indo Pacific Security more pointedly is the not so benign military rise of China as an unsettling and disruptive factor impacting regional security and stability.

It would be in order to briefly share the state of relations of United States, Japan, Australia and India with China and the level of threat perceptions of each of these nations on China’s emerging strategic blueprint in the Indo Pacific Region.

Commented widely and analysed is China’s intention to prompt the strategic and military exit of the United States from Western Pacific in particular and Indo Pacific as a whole. United States Forward Military Presence Forces in Japan and South Korea confine China to its Pacific littoral besides also impeding China’s political and military coercion of Japan and South Korea. Inability to break-out in the wider Pacific Ocean thereby limits China’s stature as a global maritime power.

In terms of Threat Perceptions the picture in 2020 is that both United States and China figure as prime military threats to each other’s security. United States past policies of ‘Engagement ‘and ‘Conengagement’ with China under different US Presidents have failed to transform China into a responsible stakeholder in Asian and global security.

United States and China in 2020 are seemingly engaged in Hybrid Warfare against each other’s encompassing the entire spectrum from diplomacy, trade and military confrontation across Oceans.

On a wider plane China’s burning ambition to emerge as the predominant Asian Power gets checkmated by United Stes spider-web of military alliances in the Pacific which China is unable to match.

China’s relations with Japan irrespective of dependence on state of China-United States relations have been by themselves frosty and tense at the best of times. Japan perceives China as a Major Threat to Japanese security and China leaves no stone unturned to needle Japan geopolitically and militarily.

China is also aggressively involved in a territorial dispute with Japan claiming sovereignty over the Japanese Senkaku Islands and has been held in check only by Article V of the US-Japan Mutual Security Treaty.

China-India Military Confrontation along the 4,000 km long Himalayan Borders of India with China Occupied Tibet is a salient feature of the military confrontationist propensities of China with its neighbours. China and India are both nuclear weapons powers with ICBM capabilities.

China has not walked the talk in terms of normalising relations with India by substantive confidence-building measures and reducing the intense strategic distrust that dominates China-India relations. China persists in military capacity building of Pakistan Army which is an implacable enemy of India and poses both external and aided internal security threats to India. China’s proxy use of Pakistan to additionally destabilise India’s national security is markedly visible.

Australia in recent years has woken up to the China Threat manifesting itself  in close proximity in South Pacific and in comparison to the earlier diffidence on China during years of former PM Rudd now seem to be building up its Navy and Air Force capabilities.

United States, Japan and India also engage each other bi-laterally in annual ‘2+2 Summits of Defence and Foreign Ministers where geopolitical and security challenges and issues hovering over Indo Pacific Security are discussed.

Having covered the contextual backdrop to the emergence of ‘The QUAD’ one must also discuss China’s reactions to this emerging security coalition which is obviously taking shape, however nebulous now, or played out in muted diplomatic tones.

China is not only dis- pleased with the emergence of ‘The QUAD’ but has serious security concerns on it taking firmer shape. China cannot outmatch this coalescing with a matching coalition to set the balance of power right. The only option which it is seriously putting in place is to create and reinforce the nuclear and missiles arsenals of its proxy states like Pakistan and North to tie down India and Japan to their neighbourhoods.

China in recent decades has been attempting to arrest the emergence of India and Japan as Emerged Powers and thereby as strong democratic pillars of Asian Security checkmating China’s hegemonistic designs on Asia.

The United States emerges that much stronger in opposing or confronting China in the future when the strategic and geopolitical ballast of India and Japan are added to the United States Superpower weightage.

Finally, turning attention to why in 2020 ‘The QUAD’ becomes an inescapable strategic imperative for India, needless to say that the Asian and global geopolitical landscape and China’s increasing propensity to reorder global security and stability to China’s expectations and terms by itself is an obvious answer.

Initially stated at the beginning of this Paper but needing added stress again, the stark reality in 2020 is that India on its own current strengths despite the surge in military capacity building to recover 2004-14 lost years of military neglect is not in a position to checkmate China’s aggressive trajectories being manifested from the Seas of the Western Pacific to the Himalayan Borders of China-India Military Confrontation.

Concluding, it needs to be stressed that ‘The QUAD’ if in existence in substantial and integrated form provides India with an existential counterweight to any potential threats to disruption of security and stability of Indo Pacific and Asian security, China included.

By actively participating in ‘The QUAD’ which is in effect a flexible coalition of like-minded democracies sharing convergent strategic perceptions on impending threats, India in no way subjugates its foreign policy options.