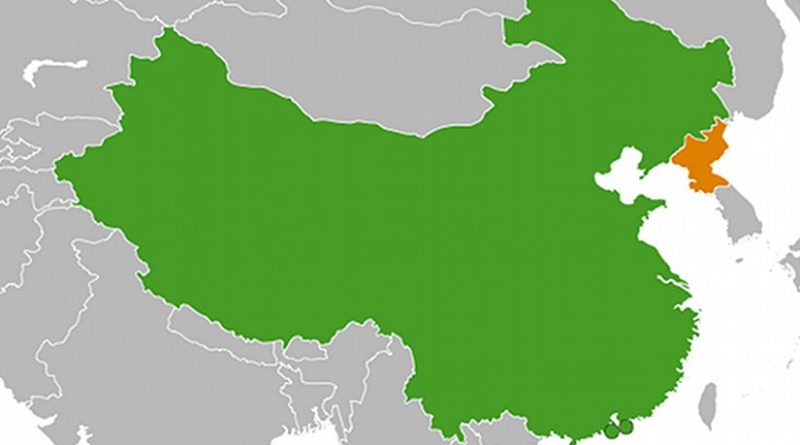 North Korean leader Kim Jong Il travelled to China on Friday in an apparent bid to secure economic assistance for his nation, which is believed to be reeling from a severe food shortage, experts say.

The visit came as the U.S. State Department announced that it was sending its special envoy for North Korean human rights to Pyongyang next week to assess the food needs of the isolated, impoverished nation.

Later, major news organizations in Seoul cited unnamed South Korean officials as saying that it was Kim Jong Il that had crossed into China and was staying in the city of Mudanjiang, in China’s northeastern Heilongjiang province.

It was unclear whether his son had accompanied him as part of the 70-person delegation that included attachés and Kim’s personal bodyguards.

Neither North Korean nor Chinese state media made any mention of the trip. China has not traditionally released information about Kim’s visits until after the North Korean leader has returned home.

Kim’s trip would mark the leader’s third visit to China within the last 12 months.

Experts said that Kim’s intention is to obtain economic assistance from his northern ally ahead of a pledge to solidify North Korea as a “strong and prosperous nation” by 2012, the 100-year anniversary of his father Kim Il Sung’s birth.

They said economic aid would also help legitimize the expected power succession from Kim Jong Il to his son, who experts believe is 27 and who is seen as lacking the experience to lead. That handover of leadership would mark the third generation of the Kim family to rule since the nation’s founding.

“The economic issue is the most important one,” said Kim Kwang-in, director of the North Korea Strategic Center in South Korea.

“Next year, North Korea expects to achieve its ‘strong nation’ status, but the current situation is dire and it will be impossible to reach that goal. North Korea hopes to draw investment and materials from China to achieve its goal.”

Ken Gause, research analyst at the Virginia-based Center for Naval Analyses, agreed that the visit would focus primarily on economic aid.
“Given the importance of the upcoming events of 2012 and the importance of that for the succession, there is a great need to show some sort of economic progress,” Gause said.

“And the only way that North Korea can legitimately show any economic progress is through enhanced aid that then they can turn around and do their own propaganda and say that they are moving quickly towards a ‘strong and prosperous state’, even though it’s just an illusion,” he said.

“But I think that there is some desperation inside North Korea to make that happen and I think this may be attached to that.”

Gause said that desperation was even more pronounced as North Korea has had little luck in diplomatic efforts to secure aid from South Korea and the U.S. in the aftermath of a 2009 nuclear test and two deadly attacks on its southern neighbor blamed on Pyongyang.

The State Department said its special envoy for North Korean human rights, Robert King, will lead a team to North Korea from May 24 to 28 to assess its food needs, the first official U.S. visit to Pyongyang since December 2009.

The trip comes amid indications that Washington is looking into the possibility of reviving six-party talks on North Korea’s nuclear program after a hiatus of more than two years.

U.S. ally South Korea regards its neighbor’s food pleas with suspicion and both Seoul and Washington think Pyongyang does not appear to be serious about its push to restart aid-for-disarmament talks.

King and a senior official from the U.S. Agency for International Development (USAID) are scheduled to meet officials in Pyongyang and conduct a food needs assessment by traveling outside the capital, officials said.

“We are assured that they will have the proper access,” State Department spokesman Mark Toner told reporters. “That’s obviously a big concern and one of the reasons why, frankly, we’ve waited this long to get a team in there.”

A U.N. report said earlier this year that more than 6 million people in North Korea urgently need help  but critics say the North has siphoned off the food in the past to feed its million-strong army and ahead of a third nuclear test, which would likely provoke a further tightening of international sanctions.

Washington’s decision to go ahead with the food assessment trip also came after Stephen Bosworth, the U.S. special envoy for North Korea, held talks this week in South Korea about Pyongyang’s aid request.

Gause said he suspected that Kim Jong Il went to hold discussions with the Chinese leadership “to see if there is any more aid he can secure from them, as well as to discuss projects that China and North Korea are currently engaged in on the border.

“And there could also be some discussion about how the succession is going,” he said.

Gause said that he expected China to continue to raise the issue of denuclearization with Kim.

“There have been some delegations that have come before to China to discuss the nuclear issue and that could come up of course in any discussion with Kim about the likelihood of North Korea wanting to move forward on the issue of the six-party talks. And I suspect that China will continue to push that,” Gause said.

“And China will continue to push the issue of the necessity of economic reform in North Korea,” he said.

But he said that it is “highly questionable” whether Kim will be willing to consider either suggestion.

Analysts will also be watching to see if Kim Jong Il meets with Xi Jinping, China’s presumptive heir to General Secretary Hu Jintao, and what they might discuss about the future of relations between the two countries.

Kim Jong Il, 69, suffered a suspected stroke in 2008 and his recent visits to China had been seen as part of an effort to drum up support for a handover of power to his son.

But Kim has made a number of state inspections around North Korea in recent months, appearing much healthier than he had in 2009 when he attended a parliamentary meeting in Pyongyang looking frail and thin.

Analysts now suggest that the succession process has slowed after the younger Kim enjoyed a meteoric rise in the ranks last year, being made a four-star general last September and given various high-level posts in the ruling communist party.

Last year, North Korean trade with China rose 32 percent to U.S. $3.47 billion. The Stalinist nation has dramatically increased trade with its northern ally in an effort to circumvent international sanctions imposed on it for acts of belligerence.