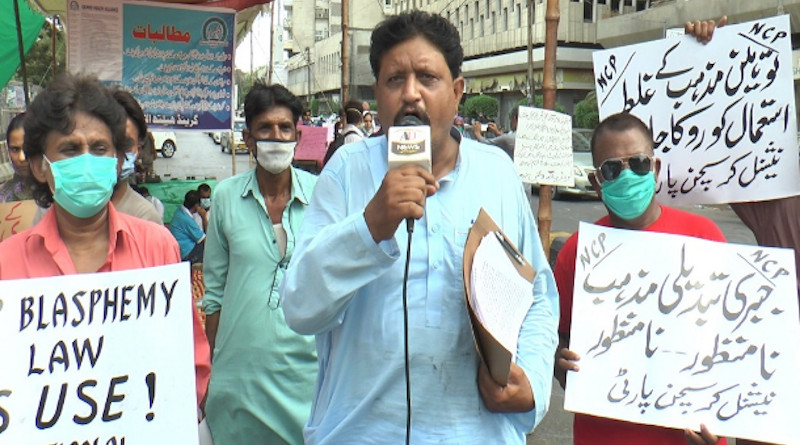 A Christian political party in Pakistan has called for a revision of the country’s blasphemy laws that carry a mandatory death penalty.

The protest came on the heels of a United States government report expressing heightened concern over Pakistan’s treatment of its religious minorities.

The National Christian Party, a Karachi-based minority party, called for the review at a protest outside Karachi Press Club on June 18, saying the laws are being used to steal from and victimize religious minorities.

“Christians are Pakistan’s largest, most peaceful and loyal minority community. However, they are being intimidated by the misuse of laws on blasphemy,” Shabbir Shafqat, head of the NCP, told rally participants.

“Under a planned scheme, minorities are having their property and even female members of their own family taken from them. In most cases, blasphemy laws are used as a tool to do it.”

“At least 24 Christians are languishing in Punjab’s jails alone on various charges under the blasphemy laws, while the laws are also being used as leverage to force poor Christian girls into converting to Islam to be married off to Muslim men.”

The NCP chief said a 15-year-old Christian girl, Areena John, was kidnapped in Karachi two weeks ago and was probably being forced to convert.  He appealed to President Arif Alvi, Prime Minister Imran Khan and the country’s chief justice to release the 24 prisoners being held in Punjab’s jails.

Their appeal echoed that of the US State Department, which recently called for their release due to the coronavirus outbreak.

The Christian party’s protest came two days after the US Commission on International Religious Freedom (USCIRF) called for a new binding agreement with Pakistan to improve its treatment of religious minorities.

In its 2020 annual report, the USCIRF recommended Pakistan be designated a “country of particular concern” for its systematic, ongoing and egregious violations of religious freedom.

It said that the country’s particularly severe religious freedom violations persisted, largely due to the ongoing enforcement of blasphemy and anti-Ahmadiyya laws and the culture of impunity for violence against religious minorities.

The USCIRF recommends that the United States and Pakistan enter into a binding agreement to encourage the Pakistani government to take meaningful steps to address religious freedom violations with defined benchmarks.

“A binding agreement could be a constructive tool to engage with Pakistan by providing greater clarity to a path off the CPC list and help improve religious freedom conditions, especially for the country’s religious minorities,” the commission said.

The commission estimated that nearly 80 Pakistanis have been imprisoned for blasphemy, with some having been sentenced to die.

President-elect Joe Biden won’t walk away from the UAE, but there are a number of issues that will seriously test