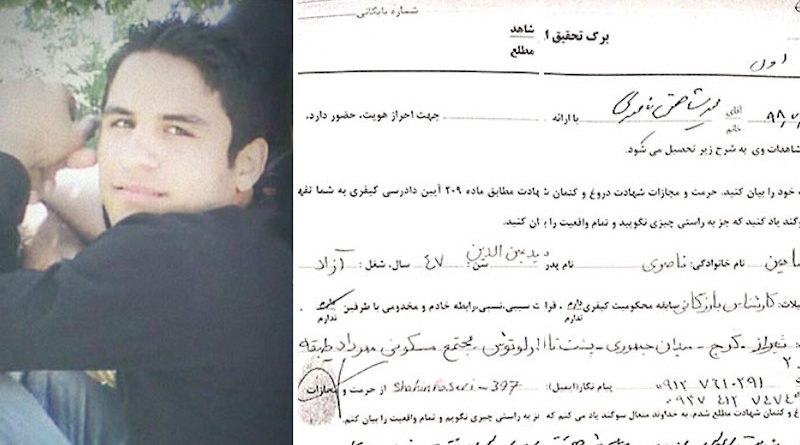 There is no news about the condition and whereabouts of Navid Afkari’s cellmate who had testified in court about the torture of the now executed political prisoner. Shahin Naseri was transferred from Shiraz’s Adel Abad Prison 10 days ago, raising concerns that he is under torture to take back his testimony.

According to Mehdi Mahmoudian, a “reformist” politician who had pursued Navid’s case, Shahin Naseri’s family said that he had not contacted them for the past 10 years.

Other reports indicate that he was taken to the Shiraz Police Criminal Investigation Department where prisoners are usually tortured and mistreated before going to prison and where he had witnessed Navid Afkari’s torture.

“It’s been 10 days since his family has not been informed of his whereabouts. It would seem as though he was handed over to the institution that he testified against,” Mahmoudi tweeted today while publishing Naseri’s written testimonies.

Shahin Naseri, who was present at the time Navid was beaten by agents at the Shiraz Police Criminal Investigation Department, has testified in court and made a written testimony of his eyewitness accounts of torture on October 31, 2019. An audio file of his testimony has also been published.

According Naseri, he saw two agents “brutally” beating Navid Afkari, who was on the floor, holding his cuffed hands over his head to prevent the agents from hitting him on the head with iron bars and batons. He also said that the agents were using degrading verbal insults and profanities directed at the wrestling champion.

Shahin Naseri said that the agents were yelling at Navid that “whatever we say is the truth” and telling him “to write down what we say”.

“One of the agents hit Navid on the hand so hard that Navid cried out and fainted,” he was heard saying on the audio file.

According to Naseri, when Navid came back to their cell, he was nursing his hand while “writhing in pain” begging to be taken to the infirmary.

“But he was not taken to the infirmary and was taken for more torture,” Naseri said.

Naseri said when he testified in court, he was threatened by the judge and told he “was interfering in a security case” and that he would be made to regret his testimony.

Before this Navid and his two detained brothers, Habib and Vahid had said they were tortured to make false confessions. Navid’s pleas in court about his innocence and torture were ignored by the judges.

In one recently published recording of Navid’s court sessions, he is heard arguing with the judge who tells him to be quiet and to sit down.

“I was in the intelligence agency for three months and (agents) with masks and sunglasses and hats interrogated and tortured me. Are these people in court or not?” Navid is heard telling the judge.

The 27-year-old protester, who was arrested at the age of 25 for taking part in protests in his hometown of Shiraz, southwestern Iran, was accused of killing a security agent. The accusation was based on his “confessions” and that of other “witnesses”. Navid said that he was forced to confess under torture. The two other “witnesses” had retracted their testimonies before Navid’s execution.

The Iranian regime has used torture as a form of punishment or to extract “confessions” from prisoners since it took power 41 years ago.

In a September 2 report, Amnesty International shed light on the widespread use of torture including beatings, floggings, electric shocks, stress positions, mock executions, waterboarding, sexual violence, forced administration of chemical substances, and deprivation of medical care against protesters detained during the last round of protests in November 2019.