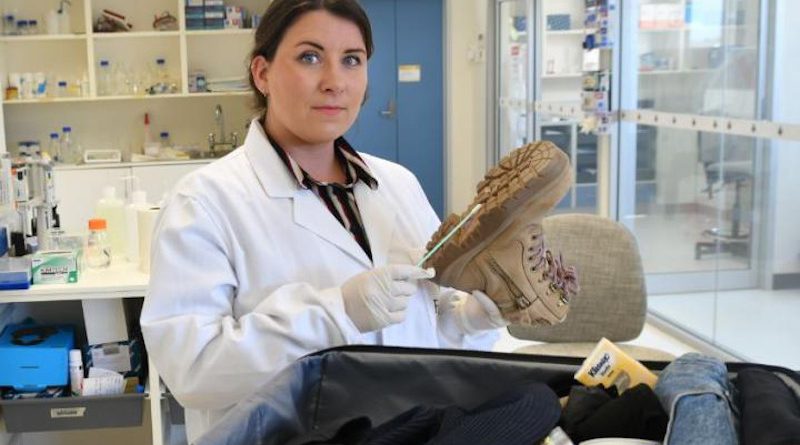 Forensic science experts at Flinders University are refining an innovative counter-terrorism technique that checks for environmental DNA in the dust on clothing, baggage, shoes or even a passport.

The Flinders-led research, led by postdoctoral research associate Dr Jennifer Young, will developed a system to trace the source of dust on suspect articles to match a soil profile of a specific area or overseas country.

“This could help provide evidence of where a person of interest might have travelled based on the environmental DNA signature from dust on their belongings,” says Dr Young, from the College of Science and Engineering at Flinders University.

The project has received a State Government Defence Innovation Partnership (DIP) grant of almost $150,000 to develop the intelligence and forensic potential of dust traces for counter-terrorism and national security, working with the Australian Federal Police and university partners (University of Adelaide and University of Canberra) to match the DNA extraction and amplification technique to Australian soil profiles from Geosciences Australia.

Professor Linacre, chair in Forensic DNA Technology at Flinders, says environmental samples serve as ideal forms of contact trace evidence as detection at a scene can establish a link between a suspect, location and victim.

The project is among more than $1 million in funding announced in the fourth round of the Defence Innovation Partnership’s Collaborative Research Fund.

InFoDust: The intelligence and forensic potential of dust traces for counter-terrorism and national security, led by Dr Young, will put the new technique on trial with soil reference data from across Australia provided by partner Geoscience Australia.

This project will utilise a series of soils with contrasting properties to understand the relationship between soil biogeochemical signals and the derived dust signal under controlled conditions, before introducing environmental variables through an ‘in-situ’ experiment.