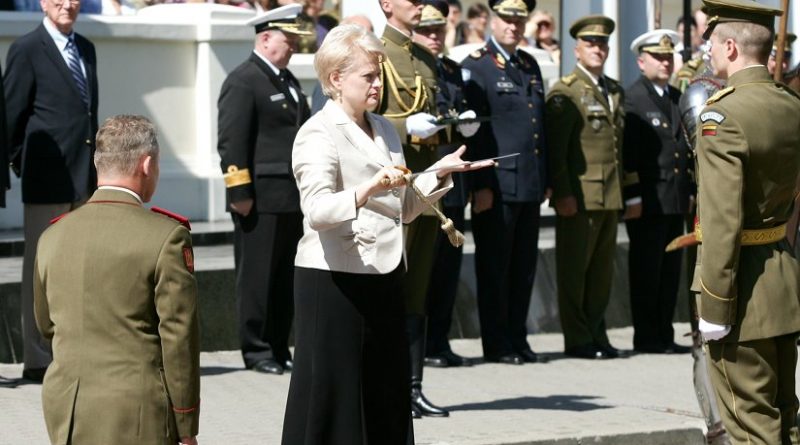 (FPRI) — Lithuania’s 2009 presidential campaign was the dullest since the office of the president was re-established seventeen years ago. As one academic remarked, “The 2009 Lithuanian presidential race resembled a cemetery: There was deadly silence”[1]—even though seven candidates ran for the office. Dalia Grybauskaite, a former diplomat, finance minister, and EU budget commissioner, stood out since she was the only one of “presidential caliber.” More importantly, since the 2008-2009 global financial crisis unfolded during the campaign, the focus was on the domestic economic situation rather than foreign policy. Grybauskaite emphasized her expertise in finance and distinguished herself from the other candidates by running as an independent despite her previous affiliation to the ex-communist party.

Surprisingly, then, when Grybauskaite made her name on the world stage, it was not due to domestic politics or economic stabilization, but through her vocal foreign policy. Although presently Grybauskaite is known for being a vocal critic of Russia and stands firmly with the U.S. and NATO, when she won the presidency in 2009, she signaled that her foreign policy priorities would be different from those of her predecessor, Valdas Adamkus. The new president implied that she would be more pragmatic. Adamkus’s “unbalanced” foreign policy of befriending “beggars” such as Ukraine, Georgia, and Moldova in Eastern Europe would be reevaluated. And Russia-phobic tendencies would be terminated. Such public statements implied that Lithuania’s foreign policy would change sharply.

Turning towards the EU, but…

An early indicator for Grybauskaite’s new foreign policy was her statements as European Commissioner for Financial Programming and Budget from 2004 to 2009. While Lithuania was befriending and supporting “beggars,” it had confrontational relations with key states in the EU. Grybauskaite intended to make EU and Nordic orientation the cornerstone of a multi-vector Lithuanian foreign policy. She signaled that her highest priority was to establish closer ties with France and Germany, which would increase Lithuania’s political weight in the EU. To achieve this goal, Lithuania would sign strategic partnership treaties with as many EU countries as possible, reducing its focus on neighboring Poland. Instead of going to Warsaw for her first official state visit—a tradition followed by all Lithuanian presidents since 1994—she went to Sweden.

In developing ties with the two most important states in the EU, less than three months into her presidency, Grybauskaite achieved her first major foreign policy victory by signing a strategic partnership treaty with France. It is unclear why France signed this treaty given that the countries have no particular historical ties or common interests. Unsurprisingly, six years later, real benefits of this treaty are hard to identify.

One of her presidency’s biggest political disappointments remains the elusiveness of a strategic partnership with Germany. Although Grybauskaite decided to restrain criticism of the Russo-German Nord Stream gas pipeline, such restraint did not result in talks with Berlin on a treaty. Germany’s lack of interest in such a treaty did not discourage Grybauskaite’s foreign policy ambitions. In her forthright political rhetoric in 2011 and 2013, Grybauskaite confidently called Germany Lithuania’s strategic partner, “forgetting” the fact that the two states have no such agreement.

Given Grybauskaite’s work at the European Commission, some analysts claimed that Grybauskaite was bound to advocate Euro-centric foreign policies. Her engagement with the EU and her collaboration with the Scandinavian states were indeed evidence of a greater personal prioritization of the EU in Lithuania’s foreign policy, especially compared to Adamkus. This focus on Europe was magnified by Lithuania’s Presidency of the Council of the EU in the second half of 2013, a period that focused on economic and financial issues. Because of her background, Grybauskaite played a major role in these debates. Grybauskaite was awarded the International Charlemagne Prize in May 2013 as an acknowledgement of her EU-focused foreign policies.

…distancing from the U.S.?

Determined to move Lithuania away from a U.S.-oriented foreign policy that she believed Adamkus pursued, Grybauskaite became the first president to assert that Lithuania’s foreign policy would not depend on the U.S. or NATO. However, Grybauskaite also sought to assure NATO allies that she would honor and uphold Lithuania’s commitments to Euro-Atlantic organizations and that Lithuania would participate in international missions. She supported a U.S. initiative on the promotion of women’s rights and gender equality worldwide, demonstrating that Lithuania focused not only on security, but also social justice. Similarly, Grybauskaite expressed her intentions to maintain NATO’s open-door policy and participate in activities that addressed energy and cyber security issues.

However, Lithuania’s relations with the U.S. began to deteriorate within a year. In 2010, the U.S. and Russia began discussing the New START nuclear agreement, provoking intense debates in the post-communist bloc. Obama’s Asian pivot and his “reset” with Russia signaled to Grybauskaite that the U.S. had new priorities and was downgrading the importance it placed on small countries like Lithuania. Grybauskaite spoke out against the New START agreement.

After signing the treaty, President Obama organized a dinner with Central and Eastern European heads of state in Prague in 2010 to address their concerns. Grybauskaite declined Obama’s invitation. An avalanche of criticism ensued. Even the international media thought that such behavior “[c]oming from a country roughly one-hundredth America’s size, […] showed a startling self-confidence, even by Lithuanian standards.” It was not the country, but rather Grybauskaite, who was demonstrating such self-confidence: she saw no tangible outcome that such a meeting could produce. Some analysts even claimed that her actions signaled that Lithuania’s loyalty to the U.S. was being replaced by loyalty to Brussels.

Relations with the U.S. went from bad to worse as Grybauskaite showed no signs of toning down criticism of NATO and, indirectly, the Obama administration. She insisted that a NATO defense plan for Poland must include the three Baltic States. “Yes, you have to be a strict and loud partner if you want to be heard in the conversation,” Grybauskaite explained in a 2011 interview. “Lithuania is not used to a straightforward, terse, forceful way of making statements. I admit using this style in pushing NATO defense plans for the Baltic States.” Once NATO decided to provide defense plans for the Baltic States, Grybauskaite claimed credit for this achievement.

For several months in late 2011, Grybauskaite tried to refrain from new criticism of the U.S. But her assertive leadership style and stern rhetoric toward the Obama administration soon reemerged. When participating in the 2012 NATO summit in Chicago, she claimed that Obama changed his position on the NATO anti-missile defense system and on U.S. relations with Russia more generally—all thanks to her influence. “The result of my efforts was that the United States and President Obama personally are very clearly formulating and very clearly supporting our opinion on anti-missile defense, air policing, and energy security,” Grybauskaite announced.

Grybauskaite’s self-confidence angered the White House, but it also suggested that she overestimated her influence on great power politics. In 2013, she again claimed that the U.S. was pursuing a new geopolitical orientation, namely, focusing on the Nordic and Baltic countries; her assertion was refuted by local political analysts as unsubstantiated.

Given the pattern that was established from 2009-2013, it was doubtful that Grybauskaite would change her style, rhetoric, or views about the U.S. and NATO or that the U.S.-Lithuania relationship would become cordial any time soon. She believed that she had “liberated” Lithuania from a “hostage” status in relation to the U.S. and that under her leadership, the bilateral relationship was finally grounded on constructive collaboration and tangible benefits.

However, when Russia invaded Ukraine in 2014, altering geopolitical realities in Europe, Grybauskaite was forced to make a U-turn in her policy priorities and her “anti-American” predisposition. She realized that without U.S. military and financial support, Lithuania could not withstand Russia’s military threat. Not only did Grybauskaite change her position on defense, pressuring the government into boosting defense spending, but she also supported reintroducing the military draft. She became a staunch critic of Russia and President Putin. Thus, changes in international context forced Grybauskaite to alter her policies toward the U.S., making them closer to those that were pursued by Adamkus.

Given the concerns that Russia’s invasion of Ukraine raised in Lithuania, no one questioned her U-turn in foreign policy. In fact, Grybauskaite’s criticism of Russia put her in a stronger political position, and her approval ratings spiked to new highs. Given new geopolitical realities, the anti-Russia platform proved to be indispensable for her re-election in 2014. Ironically, a president who came to power promising to “liberate” Lithuania from its dependence on the U.S. and NATO now finds that her close relationship with them is key to her political success and Lithuania’s security.

About the author:
*Ausra Park is an Assistant Professor at Siena College, NY. Her research focuses on post-communist political leadership profiling, comparative foreign policy, political psychology, gender and politics, and social justice issues (human trafficking). She has received numerous prestigious grants from international organizations such as Fulbright, IREX, German Marshall Fund of the US, and others. She is currently working on two book manuscripts that examine Baltic leadership and the first female presidents in the Eastern post-communist bloc.