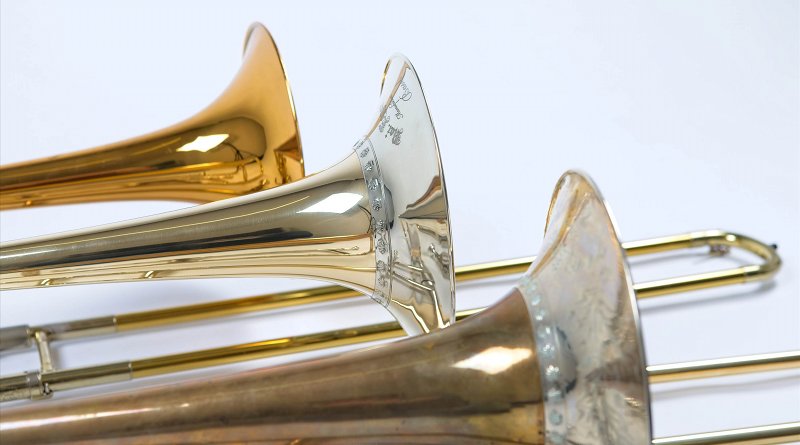 Precious Originals: Early Romantic Bass, Tenor and Alto Trombone. The historical original (front) of a romantic trombone and an exact replica (middle) manufactured by the brass instrument maker Egger in Basel and a modern-day instrument (back). Typically, the sound corona of the historic German trombone is covered with fine engravings. Image: Empa

Musicians and conductors of the classical music scene demand it, and Basel-based instrument manufacturer Rainer Egger wants to deliver: replicas of trombones from the Romantic era.

These trombones are special because of their dark sound, which allows the symbolism in the compositions of that era ripe with great emotions to come into its own. As research partners in this ambitious Innosuisse-funded project “The Sound of Brass” led by the Bern University of the Arts Empa researchers are also involved; they analyzed the material and sound of the historical originals and compared the results with Egger’s first replicas. The project aims to show how replicas can be manufactured that are able to compete with historical instruments – or even surpass them in terms of sound.

Rainer Egger has specialized in historically informed instrument making and wants to revive the “German Romantic Trombone”, which was played mainly in German-speaking countries in the 19th century. Brahms, Mahler and Bruckner may have written their compositions for these trombones, to which contemporaries attested a “fabulously soft and full tone”.

“Today’s trombones sound quite different,” explains Egger. He has long been convinced that the construction of the instruments, the materials used and the manufacturing technique are responsible for their unique sound. However, this connection has not yet been scientifically proven.

It was precisely for this stringent process of trombone replication that Empa materials researcher Martin Tuchschmid began to investigate a large number of romantic trombones. Tuchschmid from Empa’s Laboratory for Joining Technology and Corrosion determined which metals and alloys instrument makers worked with 150 years ago using 64 historical examples from the Musical Instrument Museums in Basel and Leipzig and from private collections in Switzerland and Germany.

Tuchschmid applied a method that is used for the investigation of metallic materials in construction and industry: mobile energy dispersive X-ray fluorescence spectrometry. Since the method is non-destructive, Tuchschmid has already been able to analyze a large number of artworks and instruments that not only require precision but also special care.

Based on his results Tuchschmid created a comprehensive materials catalogue. Numerous alloys that had been used historically are listed in this guide. It tells us, for instance, that different parts of the trombone, such as the bell or the slide, were often made of different materials.

Among the materials Tuchschmid found frequently were golden brass, the reddish, copper-rich brass alloy tombak and German silver, a copper alloy with nickel and zinc.

“The analysis resembled an archaeological excavation,” says Tuchschmid. “Until now, it was simply not known which materials were used in historical brass instrument making.”

The researchers also used ultrasound to measure the thickness of the instrument walls.

“Almost every component was manufactured to different degrees of thickness,” explains Adrian von Steiger of the Bern University of the Arts. Nowadays, this can be produced industrially, but in the past, these parts were all made by hand. “150 years ago, instrument makers hammered the metal extremely thin – in some cases down to less than two tenths of a millimeter,” explains von Steiger.

To a certain extent, these quantities can be measured physically in the form of sound frequencies and amplitudes. To ensure that the sound of the trombone in this type of experiment is not influenced by a musician’s playing technique, Egger, together with experts from Empa’s Laboratory for Acoustics/Noise Control in Dübendorf, developed a device that stimulates the air column in the trombone with reproducible and precisely controlled intensity.

In order for this “artificial player” to play the trombones in the very same way as a real player would, the acoustic researchers first determined the relevant pressure fluctuations that a musician generates when he plays the trombone. For this purpose, they fitted brass mouthpieces with pressure sensors and had numerous orchestral musicians, including military musicians of the Swiss Army, play at different volumes and pitches.

Jet in the mouthpiece

Sound pressure waves of up to 160 decibels were recorded, which is far above the human ear’s pain threshold of 130 decibels. Thus what happens in the mouthpiece of a trombone (as far as noise is concerned) is pretty much the same than, say, a jet launching or an explosion starting. The fact that the instrument emits softer sounds at its end is partly due to its poor efficiency: Only about 100 decibels leave the trombone at the other end in the way of music.

In the Empa laboratories, the calibrated artificial wind player finally performed on various trombones. Armin Zemp, Bart von Damme, Benjamin Morin and Gwenael Hannema analyzed the sound of the first replicas and of historical originals in a special low-reflection sound laboratory that does not reflect the outgoing sound to the instrument.

The researchers used a scanning laser Doppler vibrometer to determine how the material reacted while playing. In addition, they simulated the interaction of the sound waves with the walls of the instrument on the computer. Their take-home message: Material composition, production technique and design of the instrument have a significant influence on the sound and structural dynamics of the trombone.

“For the first time, we were able to clearly show that the standing sound waves in brass instruments interact with the material due to resonances, which significantly influences playability and sound,” explains Empa researcher Zemp.

But that’s not all; the analyses also revealed indications for instrument making, such as the ideal position for the braces as well as specifications for the thermal treatment of the material.

“When the sheet is annealed, internal stress is relieved. As a result, the sound of the trombone becomes much softer because the vibration behavior of the material changes,” explains the acoustic researcher. With regard to material composition, the analyses showed that harder alloys with a higher zinc and nickel content result in instruments with higher sound power levels.

“The overall sound of a trombone is influenced by many individual parameters. The new data can now be incorporated into historically informed instrument making,” says Zemp.

The aim is to generate the typical historical sound with perfect replicas. Initial reactions from experts show that this tricky task is likely to succeed. Ian Bousfield, lecturer for trombone at the Bern University of the Arts, has already had the opportunity to play the first replicas at concerts with the Biel Solothurn Symphony Orchestra.

“The audience thought that the replicas would sometimes even sound more expressive than the original,” he says. He was initially skeptical as to whether the quality of a legendary romantic trombone could be recreated. “But after the analyses of the replicas, I’m sure we’re on the right track.”