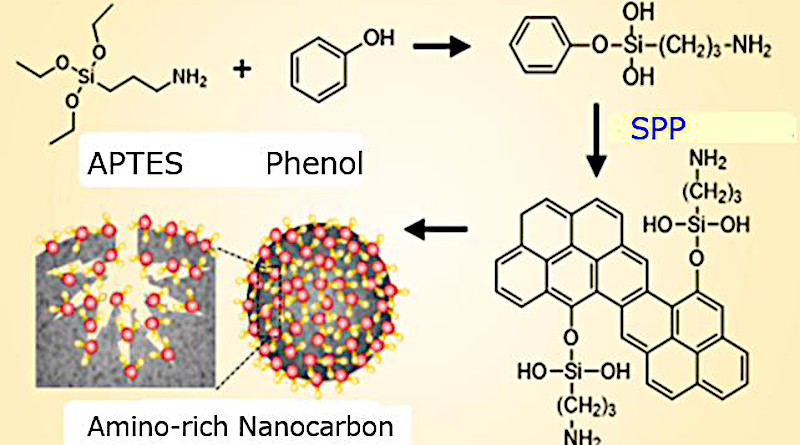 Nagoya University scientists have developed a one-step fabrication process that improves the ability of nanocarbons to remove toxic heavy metal ions from water. The findings, published in the journal ACS Applied Nano Materials, could aid efforts to improve universal access to clean water.

Various nanocarbons are being studied and used for purifying water and wastewater by adsorbing dyes, gases, organic compounds and toxic metal ions. These nanocarbons can adsorb heavy metal ions, like lead and mercury, onto their surfaces through molecular attraction forces. But this attraction is weak, and so they aren’t very efficient adsorbents on their own.

To improve adsorption, scientists are considering adding molecules to the nanocarbons, like amino groups, that form stronger chemical bonds with heavy metals. They are also trying to find ways to use all available surfaces on nanocarbons for metal ion adsorption, including the surfaces of their inner pores. This would enhance their capacity to adsorb more metal ions at a time.

They mixed phenol, as a source of carbon, with a compound called APTES, as a source of amino groups. This mixture was placed in a glass chamber and exposed to a high voltage, creating a plasma in liquid. The method they used, called “solution plasma process,” was maintained for 20 minutes. Black precipitates of amino-modified carbons formed and were collected, washed and dried.

A variety of tests showed that amino groups had evenly distributed over the nanocarbon surface, including into its slit-like pores.

“Our single-step process facilitates the bonding of amino groups on both outer and inner surfaces of the porous nanocarbon,” says Saito. “This drastically increased their adsorption capacity compared to a nanocarbon on its own.”

They put the amino-modified nanocarbons through ten cycles of adsorbing copper, zinc and cadmium metal ions, washing them between each cycle. Although the capacity to adsorb metal ions decreased with repetitive cycles, the reduction was small, making them relatively stable for repetitive use.

Finally, the team compared their amino-modified nanocarbons with five others synthesized by conventional methods. Their nanocarbon had the highest adsorption capacity for the metal ions tested, indicating there are more amino groups on their nanocarbon than the others.

“Our process could help reduce the costs of water purification and bring us closer to achieving universal and equitable access to safe and affordable drinking water for all by 2030,” says Saito.