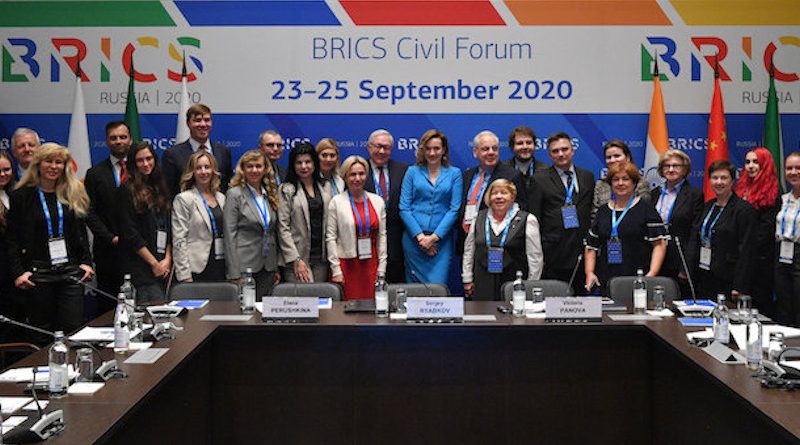 Since its establishment in 2009, BRICS, an association of five major emerging economies Brazil, Russia, India, China and South Africa, has had a significant influence and expanded in many directions, one of which is the BRICS Civil Forum. Significant to recall that during the 7th summit held in July in the Russian provincial city of Ufa in Bashkortostan, on Russia’s initiative the BRICS established the BRICS Civil Forum.

Its mission is to put public priorities on the BRICS agenda as well as to present civil initiatives to the leaders of BRICS countries. Some of the proposals provide the leaders with an opportunity to look at the current development issues, taking public interest into serious consideration.

Now in its fifth year, the BRICS Civil Forum 2020 gathered over 450 members of civil society institutions, experts, researchers and media representatives both online and offline formats for discussions on various issues. The three-day program featured a series of thematic sessions in Food and Healthcare; Education and Science; Economic Development in the Digital Era; Information Strategies and Society; Environment, Climate and Energy; Sustainable Cities and Rural Development; Women and Girls; and People-to-People Exchanges.

The closing session was moderated by Viktoria Panova, co-chair of the BRICS Civil Forum, Managing Director of the National Committee on BRICS Research and Vice-President for International Relations of the Far Eastern Federal University.

“Today, we are handing over the BRICS Civil Forum’s recommendations to the offices of BRICS and G20 sherpas. These recommendations will ensure the successful completion of the Russia’s BRICS Chairmanship in 2020 and help the five countries to make a confident step towards the new five-year period. The ideas voiced by our civil society have received broad support from BRICS colleagues as well as from participants from a number of countries in Europe and Asia. I believe that we have held a comprehensive exchange of opinions useful to people worldwide,” Viktoria Panova emphasized.

“Initiatives in three pillars of BRICS cooperation – political, economic and humanitarian – are aimed at boosting living standards and the quality of life of the peoples of the five BRICS countries. This is a paramount task both for Russia’s BRICS Chairmanship this year and for the group’s entire multifaceted strategic partnership,” stressed Pavel Knyazev, Russia’s BRICS Sous-Sherpa and Deputy Director of the Russian Foreign Ministry’s Foreign Policy Planning Department.

In his opinion, the Forum has once again clearly demonstrated that civil organizations in the five countries are proactive and committed to constructive and mutually complementary cooperation. BRICS Civil Forum 2020 has proven the format’s great value as an efficient and appealing platform for cooperation among the five states, which is particularly relevant as it was initiated during Russia’s chairmanship in 2015.

“In 2013, the year of Russia’s G20 Presidency, we launched a transparent and highly efficient civil process that has been replicated by the countries presiding in G20 since then. What has taken place in the BRICS format since 2015 is also a highly engaging and open process that should be developed further,” Svetlana Lukash, Deputy Chief of the Presidential Experts’ Directorate noted in her contribution.

In her opinion, recommendations by the BRICS Civil Forum’s Environment, Climate and Energy Working Group are even more ambitious than those made by the Civil G20 in certain areas this year, which is a surprising and very positive outcome. A lot of work has been done in other areas as well, in particular, on women’s issues as well as the work of the Healthcare Working Group.

“As official representatives, we should base our efforts on your ideas – this is the purpose of our work. These interaction formats exist to improve people’s lives in all areas. Without the contribution of civil society, meetings at the level of heads of state would be pointless,” Lukash pointed out at the gathering.

Sergey Ryabkov, Russia’s BRICS Sherpa, Deputy Minister of Foreign Affairs of the Russian Federation, chaired the inaugural session of BRICS Civil Forum 2020, noted that within a decade, BRICS has come a long way from an informal venue for exchanging views on current issues on the international agenda to an absolutely mature and stable network of multilateral interaction on diverse issues on international and domestic agenda of the five BRICS countries.

The meeting outcomes included a set of recommendations developed by BRICS civil society for the five countries and governments, as well as a comprehensive document by BRICS Civil Society to the BRICS leaders.

Despite the current global situation due to the spread of the coronavirus infection, the activities under the Russian BRICS Chairmanship in 2020 are carried out in a consistent manner. Since January 2020, more than 60 events have been organized, including via videoconferencing.

BRICS leaders are scheduled to meet on November 17, 2020. Russia is pushing forward significant issues of five-sided cooperation in the bloc’s three areas of strategic partnership: policy and security, economy and finance, and cultural and educational cooperation. The five BRICS countries together represent over 3.1 billion people, or about 41 percent of the world population.

One thought on “BRICS Civil Forum Evolving From Strength To Strength”