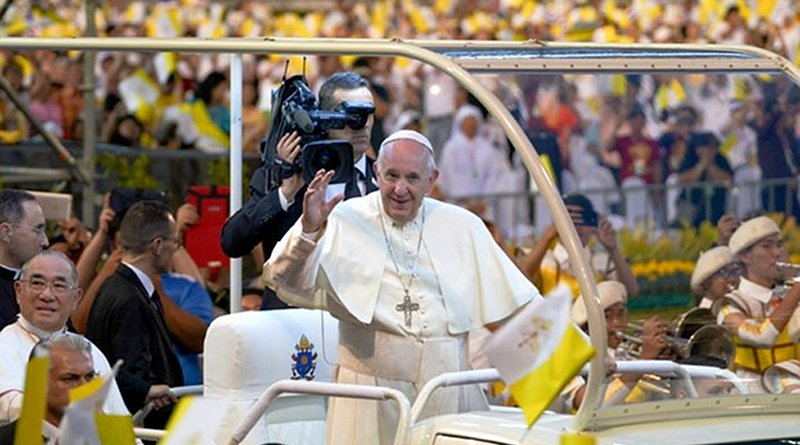 Pope Francis waves as he arrives at the national sports stadium in Bangkok for an open-air Mass, Nov. 21, 2019. Photo Credit: Pimuk Rakkanam/BenarNews

Pope Francis denounced human trafficking, defended migrants and condemned prostitution on his first full day in Thailand on Thursday, during which he met separately with the nation’s monarch, prime minister and Buddhist patriarch.

Amid chants of “viva il papa, viva il papa” from thousands of Roman Catholics, the leader of the Catholic Church delivered an open-air Mass in the Thai capital in the evening. He provided a glimpse of one of the cornerstones of his papacy – fighting human trafficking.

“Here, I think of children and women who are victims of prostitution and human trafficking, humiliated in their essential human dignity,” the pope said in his homily at the national sports stadium in Bangkok

“All of them,” he said, speaking in his native Spanish, “are part of our family. They are our mothers, our brothers and sisters.”

Earlier in the day, the pope met King Maha Vajiralongkorn at the Amphorn Sathan Residential Hall inside Bangkok’s Dusit Palace, the monarch’s residence, according to the Vatican News.

King Vajiralongkorn and his royal consort, Queen Suthida, had a “conversation” with the head of the Catholic Church and gifts were exchanged, the Holy See’s news service said, but did not provide details, saying members of the press “were excluded” from the private meeting.

The 67-year-old monarch, who was crowned during a lavish three-day ceremony in May, was the crown prince when he greeted Pope St. John Paul II on the only previous papal visit to Thailand, in 1984.

Pope Francis, who arrived on Wednesday, is on a seven-day Asian trip that will also take him to Japan. He is in Thailand to celebrate the 350th anniversary of the creation of the Apostolic Vicariate in the predominantly Buddhist nation, formerly known as Siam.

In response, Prayuth said the nation had taken steps tostrengthen the family institution and ensured “equal opportunities for all groups in society, especially women and children.”

Thailand, which is notorious for its massage parlors and go-go bars, passed a law in 1960 that makes prostitution illegal, but a 2014 UNAIDS report said more than 123,000 sex workers work in the country. Advocacy groups, however, say the actual number could be twice that figure, including migrants from neighboring countries.

Thailand has recently become a destination for thousands of Rohingya refugees who have fled military crackdowns in Myanmar’s Rakhine state. A major human trafficking syndicate in Thailand was also exposed when authorities unearthed dozens of mass graves in the jungle in southern Songkhla province, near the Thai-Malaysia border, in May 2015.

During the past few months, Pope Francis has actively campaigned against human trafficking. .

In September, he hosted at the Vatican a worldwide network of religious congregations that were actively campaigning against traffickers. Two months earlier, the pope wrote the preface to a new book in which he described prostitution as “a wound to the collective consciousness.”

“A person can never be offered for sale,” he wrote. “No one should turn away or wash their hands of the innocent blood that is shed on the roads of the world.”

The supreme patriarch welcomed his visitor while draped in orange robes and barefoot, a gesture reciprocated by the pontiff, who removed his shoes before entering the jeweled room, where they sat before a brilliant Buddha statue.

Throughout the pontiff’s first visit to Thailand, he was accompanied by Sister Ana Rose, his second-cousin who has lived in Thailand since the 1960s as a missionary and acts as his translator.

There arefewer than 400,000 Catholics in the country of more than 69 million people, but his visit attracted huge crowds of beaming followers, greeting him at each destination, including at a nonprofit hospital founded by the church in 1898. Tens of thousands also watched his Mass on giant TV screens in an adjacent stadium.

Patcharee Sankusolnaipasutha, a 23-year-old Rajabhat University student, said it was “God-sent” that she was chosen to participate at the Mass by reading the Prayer of the Faithful during the General Intercessions.

“It was a big surprise because I am just a tribal Karen from northern Chiang Mai,” she told BenarNews. “I’m so happy.”

Supaporn Sritawatpong, a doctor at Rajavithi Hospital in Bangkok, told BenarNews he prepared for the Pope’s arrival for two months.

“I’m very happy to have a chance to welcome the Pope. He is like our father,” he said. “His visit is a historic moment. He respects other faiths and creates harmony.”