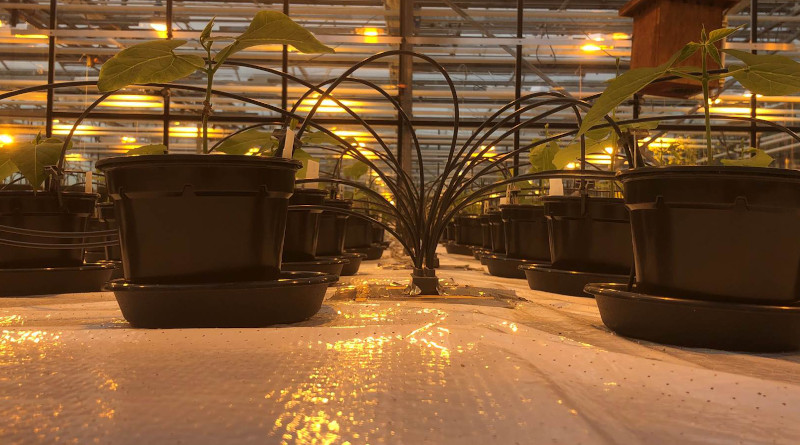 Overview of the experiment after two weeks. The black tubes are part of the water supply system.

Since November 2019, Wageningen University & Research has been experimenting with the cultivation of string beans on artificial Martian and lunar soil. What makes this experiment so special is that part of the crop is fertilised with human urine in the form of struvite. The main question is: does this work? It certainly appears so, the first beans have recently been harvested.

The experiment is designed to research the possibilities of feeding future inhabitants of the moon or Mars with locally grown crops. Scientist Wieger Wamelink: ‘After a few experiments we now know how to do this. But simply getting plants to grow is not enough. We need to use urine and faeces produced by astronauts to fertilise the plants.’

How is the experiment set up?

In half the pots, 15 grams of struvite was added. The struvite was obtained from wastewater purification installations in Western Amsterdam, Den Bosch and Cuijck. In each pot, three beans were planted. If more than one bean sprouted, the smaller beans were removed from the pot after two weeks, leaving just one plant per pot. The plants are automatically watered daily and kept under greenhouse conditions with a pleasant 20-degree temperature during the daytime, and 18 degrees at night. If there is insufficient daylight, lamps are switched on.

During the experiment, the length of the plants was monitored. ‘Soon enough the lengths of the plants started to vary, showing that the crops planted in potting soil and lunar soil simulant with struvite experienced the strongest growth,’ says Wamelink. ‘The Martian plants with struvite showed a lag in their growth, which was surprising, as their growth started out as more promising than the lunar plants.’

With lengths of no more than 25 cm, the plants that went without struvite clearly showed the poorest growth.

On 20 December, the first plants started budding and just before Christmas, the first beans appeared, within 2 months. Wieger Wamelink: ‘We were certainly thrilled with this result, which was faster than we expected, although it meant I had to work between Christmas and New Years’ Eve.’

Enough beans for a meal?

The new year started with a harvest of beans and several more did follow. Enough for more than one meal, but not enough yet for a long term stay on the moon or Mars. Up till now, more than 2 kilogram of beans has been harvested from the pots containing struvite. The yield from the pots without the struvite is a meagre few beans.