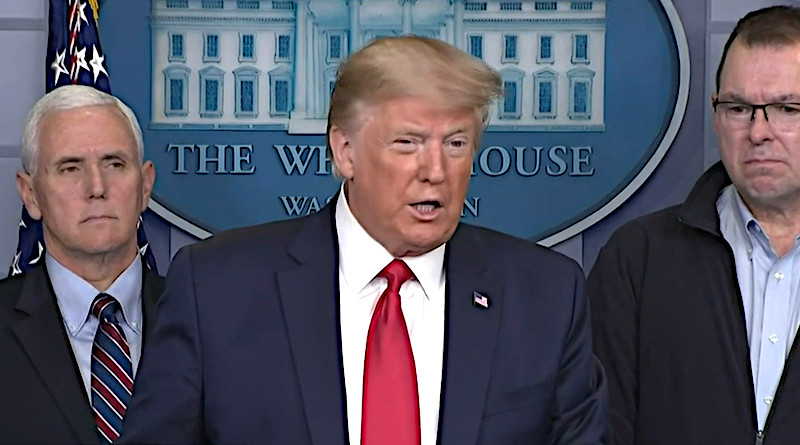 On March 22, 2020, President Donald J. Trump, flanked on his right by Vice President Mike Pence, and to his left by FEMA Administrator Peter Gaynor, appeared more in command and more Presidential than at any other time in his administration, as he professionally and mathematically rattled off in stark detail numbers relating to the Corona Virus and its effects on the United States of America.

His compassion, steadfastness, and direct leadership skills echoed images of Winston Churchill, and his bulldog spirit came through, loud and clear.

The administration of President Trump matured on this day, to become a Wartime President.

In this day and age, when warfare between nations has changed from outright artillery and bombs and fire, instead towards subterfuge, biological and chemical warfare and false flags, wherein he declared that the “invisible enemy” has attacked countless nations all at once, President Trump has vowed that we would defeat this enemy, offering his own hard-earned character, energy, optimism, strength, positivity, and leadership skills honed from more than 70 years of living at the helm of leadership in the toughest city and state in the world, New York, New York, USA.

President Trump is exactly the right leader at the right time, preserving America’s freedom, ingenuity, the Bill of Rights, and what makes it great, while other countries took the easy (or lazy) way out, either killing/jailing their citizenry (like China) or letting them all flounder and die in total freedom (like Italy).

It seems that anyone and everyone in the Mainstream Media wants to use the Corona Virus tragedy to pile on the People’s President, denying him the credit that he is due, and that he has duly fought for, but like a true American CEO, Donald Trump will prevail.

He is cutting through the bureaucratic red tape and allowing experimental drugs to sail through the otherwise bogged down Food and Drug Administration (FDA), while tearing through the Internal Revenue Service (IRS) and U.S. Treasury to issue sizable checks/payments directly to the American people and the nation’s small business, as well as forcing the Department of Education (DOE) to halt/hold off on demanding monthly student loan payments, while turning on his own industry (this is the hallmark of a great leader and man) the real estate business by ordering them all to hold off on evictions and mortgage foreclosures to help and assist and aid the American people and its small business, which he aptly called “the engine of America.”

If there was anyone in America (or the world) that ever doubted the integrity, love for America, and love for its People of President Donald J. Trump, then this should be dispelled completely and totally by his emergent leadership, like a Phoenix from the Ashes, over the past few weeks in his Presidency.

And as Frank Sinatra once said, “The Best Is Yet To Come, And Won’t It Be Fine.”