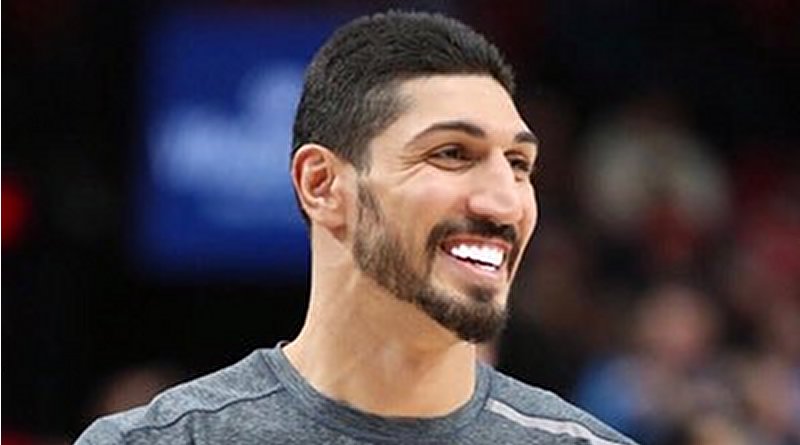 NBA superstar Enes Kanter says he loves his homeland Turkey as much as he loves professional basketball.

Erdogan has arrested Kanter’s father, and bullied his family after accusing the basketball player of being part of the Hizmet movement of exiled Turkish cleric Fethullah Gulen, who the president asserts was behind a failed coup attempt in 2016.

Two years ago this week, Erdogan demanded that Kanter be arrested, and fears of violence from the Turkish state have gotten so bad that the FBI installed a panic button to help protect the player.

Kanter said he will continue to play professional basketball, and will not be silent about the Turkish government’s repression.

“His (Erdogan’s) regime’s and his hostility to me began in 2013 when I first start criticizing (the) government on unjust, unfair and illegal closures of college preparatory centers linked to businesspeople in the Hizmet movement,” Kanter said.

“This closure pretty much became the first public clash between the Erdogan regime and the Hizmet movement,” he added.

“It was obvious that there was something that Erdogan doesn’t like about the Hizmet movement. Up until the closures of college preparatory centers, no one knew about that,” Kanter said.

“The way Erdogan handled this relationship was brutal, ruthless, unjust and unfair. I can’t stand for any of these, so I stood up against this tyranny and started criticizing. Neither Erdogan stopped his approach nor I, and we’ve kept clashing since then.”

Kanter signed with the Utah Jazz in 2011, the Oklahoma City Thunder in 2015, the New York Knicks in 2017, and the Portland Trail Blazers in February this year.

The Trail Blazers lost the Western Division Playoffs, the first step to the NBA Championships, to California’s Golden State Warriors in the final game on Monday.

Erdogan’s threats have placed enormous pressure on Kanter, but he insists it has not impacted his performance or his commitment to help the people of Turkey.

“I’m a successful professional athlete, and whatever I’m going through in my private life would never impact my performance on court,” he said.

“They’re two different worlds for me … I’ve known nothing else but basketball … since I was 13, so I guess it’s pretty important,” he added.

“I see basketball and my platform as a way to teach the younger generation how to be successful and hopeful for the future,” Kanter said.

“Once you’re a successful professional athlete, younger generations see you as a role model, so … I’m trying to do my best to set my life as a role model to them,” he added.

“I believe I have an obligation as a human being to speak up against any atrocities. I believe that as a human being I should be standing for human rights, democracy and freedom of speech … Me being a celebrity makes it easier for people to hear, see and experience what I believe.”

On Erdogan, Kanter does not mince words. “He’s a dictator by definition. He silences media, destroys opposition, demonizes his critics … so all these make him a dictator,” Kanter said.

“Turkey deserves a leader who’s open minded, democratic, progressive, intelligent, modest and forward thinking, a leader who embraces everybody in the community regardless of their political choices.”

The harassment from Erdogan has put Kanter’s family at risk too. “I can’t say they’re safe when my dad lost his job and got jailed based on terrorism charges because I’m his son,” Kanter said. “These allegations are baseless and ridiculous, so how could I feel they’re safe?”

He said he respects Gulen and the Hizmet movement, rejecting Erdogan’s claims against them.

“I’m so close to Mr. Fethullah Gulen in terms of his life philosophy and teachings. I admire his way of extracting an individual’s inner potential … in order to be a better person in his or her community,” Kanter said.

“Erdogan should know that he’ll be brought to justice one day and pay for his mistakes. First, he should stop all his unjust, inhumane acts against the people of Turkey. Second, he should start making everybody’s life better in Turkey.”

Before moving to the US in 2009 to attend college in California, Kanter was a star basketball player in Turkey’s premier leagues.

He said despite playing for the NBA in the US, he still sees himself as a champion for Turkey and its people.

“I think everyone in society has an obligation to speak out on issues of human rights and democracy, and to stand tall against atrocities, inhumane practices and dictatorships,” Kanter said.

Celebrities like himself “have a bigger opportunity to make a difference and to raise awareness on such issues because of our platforms,” he added.