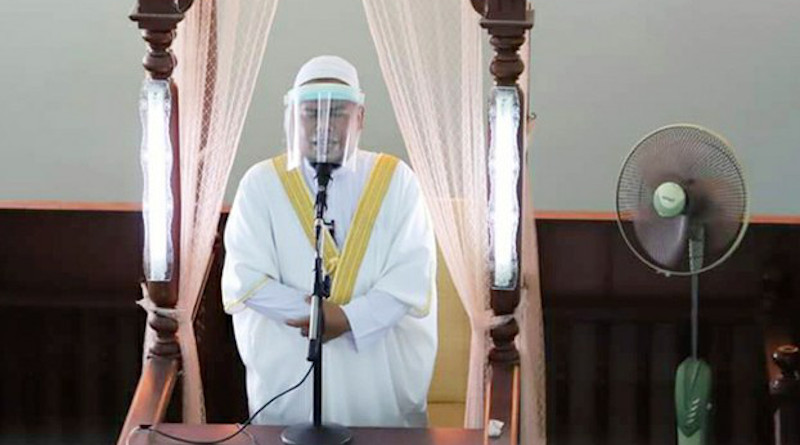 An imam wears a face shield while preaching during Friday prayers at the central mosque in Narathiwat province in southern Thailand, May 22, 2020. Photo Credit: BenarNews

Muslims across the region are preparing to quietly mark Eid al-Fitr, the holiday at the end of the fasting month of Ramadan that normally draws celebrations bringing thousands together, as COVID-19 cases multiply and Bangladesh also recovers from Cyclone Amphan.

Countries have set their own requirements for prayers at mosques and travel for Eid, which falls on Sunday throughout most of the region. But social distancing and the wearing of masks replace hugs that Muslims expect to share while rejoicing over the end of Ramadan and its daily fast.

“The spirt of Eid is to hug, shake hands, visit the homes of relatives and share food with people from all walks of life. But this year, we have to be indoors and turn away people who come to our house,” Dhaka resident Golam Nabi Babu told BenarNews. “This is completely against the spirit of Eid.”

Confirmed cases of the coronavirus have soared in Bangladesh lately, with health authorities recording daily increases topping 1,000 for at least five straight days since Monday.

In Thailand, many Muslims who had dealt with bans on Friday prayers and Ramadan-time tarawih prayers throughout most of the fasting month received a reprieve this week, just in time for the end of Ramadan, which they will celebrate on Sunday.

All mosques, including those in the Thai Deep South, which is home to 2 million Muslims in the Buddhist-majority nation, returned to normal, meaning believers could congregate as long as they followed social distancing regulations. The daily number of newly confirmed COVID-19 cases has fallen to less than 10 per day during the past two weeks at least.

In Jakarta, Indonesia’s National Mosque is on lockdown until June 4 and will be closed Sunday as the world’s most populous Muslim-majority nation marks Eid.

Elsewhere, the nation maintains “red, yellow and green” zones, establishing different rules from a complete lockdown to allowing some gatherings as long as social distancing is maintained.

In addition, the government has banned the annual tradition of returning home for the holiday (mudik). Despite the ban, authorities have reported an increase in traffic in the greater Jakarta region and many are using public transportation to get home.

The Institute for Policy Analysis of Conflict, a Jakarta-based think-tank, said in a report this week that confusing signals sent out by the government and the nation’s religious authorities over Ramadan-time movements could aggravate the coronavirus pandemic.

“With the confusion and the inconsistencies on the part of the government and the deep emotional ties to the annual family gathering at the end of Ramadan, new clusters of Covid-19 cases are almost certain to emerge,” IPAC said.

In Malaysia, authorities made nearly 10,000 motorists turn around since Monday after they tried to return to their hometowns despite a ban on interstate travel as a measure to contain the spread of the virus.

Special Eid prayers at mosques will be allowed in four states – Perak, Kedah, Johor, and the Federal Territory – but the number of attendees will be limited to between 12 and 30 depending on the location, officials said.

In Bangladesh, where Eid falls on Monday, the government has ordered that Eid prayers be cancelled at the National Eidgah, the prayer ground in front of the Supreme Court where hundreds of thousands of Muslims normally gather.

In the mainly Catholic Philippines, Filipino Muslims are faced with a quiet holiday as the government, driven to slow the COVID-19 pandemic, has maintained its ban on mass gatherings in houses of religion, including mosques, in place since Ramadan began.

But in Marawi, a Muslim city in the south, Eid will arrive as residents mark the third anniversary of an assault on their hometown by pro-Islamic State militants, who engaged government forces in a five-month battle that destroyed the city.

Mohammad Agakhan Sharief, a local religious leader, is among nearly 100,000 residents who remain displaced and have been barred from reoccupying their homes in the city, which largely remains uninhabitable and strewn with unexploded bombs, according to officials.

“The temporary shelters are too small for the evacuees,” he told BenarNews.

“Let us go home. We have been suffering too much already.”

“All pilgrims are required to go through thermal scanning, apply hand sanitizers, don facial masks, bring their own praying mats and stay one to two meters away from one another. They have to clean up the mosque right after prayers are done,” Safie Jehloh told BenarNews on Friday.

Deep South resident Mahkose Abu said he was happy to be able to participate in Friday prayers at a mosque in Yala.

“I felt weird not being able to have Friday prayers and tarawih prayers at the mosque, but now we can today – and we can do Eid prayers, too, so we rejoiced,” Mahkose told BenarNews.

“I’m so glad I got the farmer relief aid so that I can buy dresses for my children and food for the Hari Raya celebration,” Suena told BenarNews Thursday, using another term for Eid.

Meanwhile, thousands of Deep South Thais who work in Malaysia remain there away from their families because they were not able to cross the border.

“I don’t know what to say. I cry every time I think of my home. I miss my home,” Patimoh Ngo-tali, who has worked at a Thai restaurant in Kuala Lumpur, told BenarNews by phone.

Zulkifli Mohamad Al-Bakri, Malaysia’s minister for religious affairs, reminded those living in states that allow Eid prayers at mosques to adhere to the standard operating procedure issued by the Health Ministry.

“Observe the one-meter social distancing in and out of the mosque and while performing prayers, members have to wear face masks,” he said, adding that those age 70 and older, or 15 and younger, could not participate. “Those who attend the prayers at the mosques will also need to take ablution at home and bring their own prayer mat.”

Khatijah Ali, who works in Penang but is from Perak, said the government orders were necessary this year.

“There is no assurance that we are free from the virus. Why can’t we [make a] sacrifice this time around, as the front-liners have been doing since the beginning to treat those infected and to contain the virus?” he told BenarNews.

In Jakarta, an office worker said he had accepted that he could not return to Solo, his hometown in Central Java, and that the government had urged him and other Muslims to not perform Eid prayers in mosques or other public places.

“For me, this year’s Eid is so sad because I can’t see my family. But I can take comfort in the fact that none of us has been infected by the virus,” Slamet Raharjo told BenarNews.

Jakarta resident Handayani, who goes by one name, also wished she could celebrate Eid with her family in Padang, West Sumatra province.

“This is a somber Eid, but I must obey the government for the common good,” she said.

Bangladesh is facing an Eid like none before. The South Asian nation is contending with the ongoing COVID-19 pandemic while only just starting to dig out from the destruction of Cyclone Amphan, which struck southern and southwestern districts on Wednesday before changing course and heading inland.

“During an ideal situation, hundreds of thousands of devotees gather at the National Eidgah to offer the Eid prayer. But we are forced to prohibit people from offering prayers because of the COVID-19 pandemic,” Anis Mahmud, director general of the Islamic Foundation under the Ministry of Religious Affairs, told BenarNews.

He said Islamic scholars agreed that this step was necessary and mosques must maintain social distancing. Baitul Mukarram, the national mosque, will host five prayer periods to allow worshipers to socially distance from each other.

Social distancing took a back seat to survival this week when authorities moved 2.2 million Bangladeshis to emergency shelters ahead of Amphan. The storm has been blamed for at least 23 deaths in Bangladesh and 80 in the neighboring Indian state of West Bengal.

In addition, on Friday, the government upended its previous ban and allowed people to travel to their homes to celebrate the Eid using vehicles other than the public transportation such as trains and buses.

Soon after the announcement, thousands of people began leaving Dhaka, many of them not paying attention to social distancing.