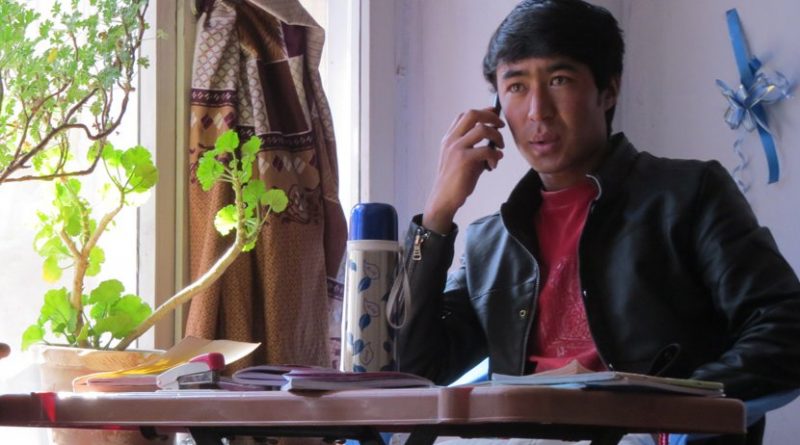 Ghulam at his study desk in Kabul, calling to make sure his family members were well, in the minutes following a bomb blast nearby

Ali, Zekerullah, Khamad and I miss Ghulam and his family. We feel sad that life in Afghanistan had finally become too burdensome for them. They are now Afghan refugees in Iran.

We have known Ghulam for many years, Ali and Ghulam being distant relatives and the best of childhood friends. Ghulam lived in community with us for about five years. We were his second family, supporting one another through thick and thin.

Ghulam worked very hard to be a good student. When he transferred to a private school, he topped his class in the exams and thus had his school fees waived.

He felt that doing well in school was the only route to a better life for a poor student.

Besides schooling, Ghulam would spare time once a week to help organize the first Food Bank in Afghanistan, run by the Afghan Peace Volunteers ( APVs ).

Volunteering isn’t a prevalent practice, and it isn’t easy trying to get well-to-do business persons to trust the APVs against the background of a ‘corruption tsunami’ in Afghanistan. So, Ghulam’s work with the nascent Food Bank called for his courage, persistence and kindness.

I remember that Ghulam had first visited Kabul with us when he was 12-years-old. Then, he had just made friends with international visitors, including with Leila Zand, an American Iranian peace builder.

When we were saying goodbye to Leila, the fresh social and emotional attachment of a young boy to a new friend was clearly apparent. Ghulam wasn’t willing to part. He cried like he was losing someone close.

Ghulam’s father left his family of seven children for Iran more than 10 years ago, looking for work so as to be able to pay off his debts.

He never returned to Afghanistan, and took a second wife in Iran.

Ghulam’s family survived on his mother’s income from washing clothes for rich Afghan households. His older brother Ramez, the oldest among the siblings, had married hurriedly years ago. Amidst worsening unemployment rates in Afghanistan, he could not find regular work anywhere and spent many years paying off the marriage debt. The marriage has not been a happy one. Ramez’s wife could not get along with Ghulam’s mother, and when disagreements came to a head, Ghulam’s mother and siblings decided to shift to Kabul, renting a small room in a residential area. His mother found a job as a house-help, and would either walk 45 minutes to-and-from work or pillion-ride on Ghulam’s bicycle in the mornings and evenings.

“It makes me sad that my mom has to work so hard as a house-help just to keep our family going. She sometimes falls ill but still has to go to work, including on public holidays!”

On a few occasions when she fell ill, Ghulam’s mother consulted me for medical advice. She was constantly worried about her children being hurt in militant attacks; the number of civilians killed in Kabul and across the country has reached record levels.

Initially, Ali was told that Ghulam didn’t intend to go with his family to Iran. But, a day before their journey, Ghulam informed us that he was leaving too. His father must have asked for Ghulam.

In the evening, he came to say good-bye.

Seeing photos of our community on my room’s wall, he asked if he could have all three photos. I immediately took them out of the frame for him, and also gave him two small notebooks to journal his experiences ahead.

Just after midnight, he and his family left to take a coach to Nimroz, and from there, through human smugglers, to Iran.

The next morning, over breakfast, Ali sobbed. He had ‘lost’ his childhood friend. Ali knew that life was probably not going to get better for Ghulam, that life as an Afghan refugee in Iran or anywhere else isn’t easy. And how about Ghulam’s wish to do well in his studies? What’s to become of that?

The journey took them 17 days. They were denied entry at the Nimroz border crossing and had to take another route through Pakistan.

Life must have been changing very rapidly for Ghulam.

Ghulam is definitely not a silly, lazy scoundrel. He’s not a potential ‘terrorist’. He’s not a liability to anyone, anywhere.

But if we met Ghulam the refugee for the first time, these stereotypes may be how we perceive Ghulam, which would make us fear or dislike him.

How did our education become so narrow and warped?

I think that, in part, it is because our money-tized lives have de-activated our curious, creative, critical, communal and compassionate understanding of the world. Our education and work is increasingly devoid of meaningful relationships with other people and other ways of life, driven madly by personal profit.

Ali has only been able to speak on the phone with Ghulam twice.

“Ghulam didn’t say much. He hasn’t got internet use yet, so we can’t keep in touch via Facebook,” was all Ali could tell me.

Each Afghan needing to cope with their own set of challenges.

The uncertainty of survival in war or refugee predicaments.

I asked Kaka Hussein, Ghulam’s neighbor, if he had any word from Ghulam.

Kaka Hussein said in a disappointed and hushed mono-tone, “I think Ghulam has been taken for a ride. Just last week, Ghulam told me that he and his family have shifted away from their father and his second wife’s house, to a place quite ‘far away’. His father needs help to run a chicken rearing business to pay off debts incurred for its start-up, so Ghulam and Ramez have to work for their father.”

“Are Ghulam and his siblings going to school?”

Worse, I know that what would add grief to Ghulam’s burdens would be his loss of our community, the loss of not being able to have tea with us in Kabul, whenever he wanted to.

Just as it must be for today’s 65.6 million refugees, I can taste the isolation and rejection Ghulam and his mother must feel.

When our relationships are cut off, our zest for life is cut off.

*Hakim (Dr. Teck Young, Wee) is a medical doctor from Singapore who has done humanitarian and social enterprise work in Afghanistan for the past 10 years, including being a mentor to the Afghan Peace Volunteers, an inter-ethnic group of young Afghans dedicated to building non-violent alternatives to war. He is the 2012 recipient of the International Pfeffer Peace Prize. (all photos: Dr. Hakim)

Home » Afghanistan: How Life Became Intolerable For Ghulam’s Mother And His Family