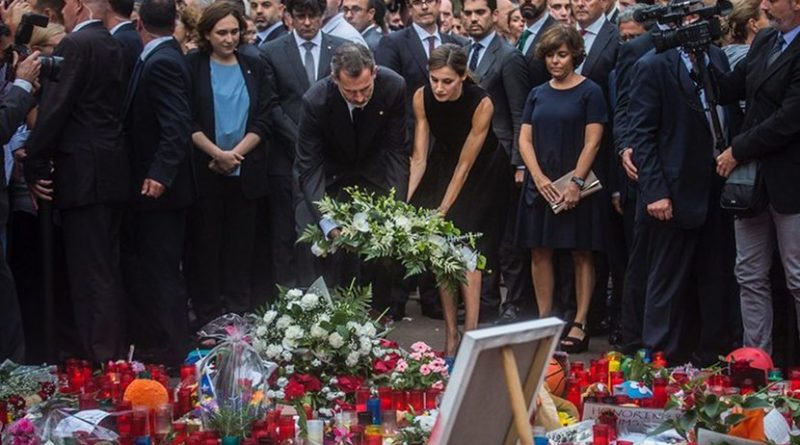 The King and the Queen of Spain depositing a wreath with the President of Catalonia, the Mayor of Barcelona and the Deputy Prime Minister of Spain. Photo by GeoBio, Wikipedia Commons.

Amid terrorist attacks in Europe, Strategic Intelligence Research & Resourcing’s sentiment is extremist violence will persist and become a normal state of affairs. Many call it the “New Normal”.  Investment partnerships can help prevent terrorism through new innovations where countries benefit with new emerging security technologies.

Unfortunately, terrorism will be part of Europe’s framework for some time. One significant reason and example is the migration of ISIL fighters to home countries. As The Atlantic Council of the United Kingdom reported, “while removing ISIL from Mosul, Iraq and Raqqa, Syria deprives it of territory, it certainly doesn’t rid Western Europe of new extremist attacks. As a point of reference, Europol has estimated nearly 5,000 jihadist have returned to the EU which is a basic premise of this brief.

The continued battle and killing of top ISIL leaders and fighters opens up escape paths for militants to return to their respective countries.

These militants open up other concerns for government due to an elevated risk from single-assailant  attacks. The single-militant type of violence witnessed in London, Stockholm, and now Paris, has become more prevalent and problematic, and a new challenge for security organizations.

European authorities have indicated improving efforts to thwart complex, large-scale attacks such as those in Paris in November 2015 or in Brussels in March 2016, the continued focus on individual extremism will be the plank why new technologies will emerge. Yet with last week’s events in Barcelona, we may need to rethink further efforts to prevent attacks.

To that end, new businesses may help lessen violence thanks in part to close working ties between public and private commercial investors who view new ways to overcome terror movements.

Because fighting terrorism is an ongoing venture, work within a public/ private framework helps expand business creativity, ingenuity, and development.  Investors as in venture capitalists and PE should take notice that fighting terror is in-grained and part of the EU fabric and why new technologies or methods need developing to stay ahead of the game.

Technologies that include predictive analytics, biometrics, system integration, and nanotechnology are some measures that help thwart the threats but also translate to promoting growth in diverse sectors, one of which is security.  While constant vigilance coupled with existing preventative methods contribute to stopping attackers in their tracks, emerging technologies and markets can be viewed as a key ingredient to future prevention that not only counter terror but benefit economic growth.  Europe, we believe, is on the right track in delivering these ideas to market with the help of public funding, private equity, and venture capital investing.

Suffice to say, state security is a policy that government cannot ignore giving impetus to new market development. This philosophy is not new. NATO researchers, for instance, expressed, how in 1958, Foreign Ministers Halvard Lange of Norway, Gaetano Martino of Italy and Lester Pearson of Canada affirmed that “scientific and technological developments can be decisive factors in determining the security of countries and their positions in world affairs.” Europe’s approach today then should be to stay one step ahead by protecting critical assets and people from threats.

With the cooperation of government and the private sector, new strategies to both anticipate and mitigate the dangers of terrorism while predicting terror plans are key to estimating the next unknown attack.  That said, the “Europe Counter Terror & Public Safety Industry & Markets – 2017-2022″ report, expressed that European counter terror and public safety infrastructure will go through a major overhaul, sustaining a 13.4% surge during 2016-2020 which is nearly four times the pace of the previous five-year period. New innovative approaches in tackling and anticipating terrorism becomes part of the aforementioned plan.

Through its own research, we’ve had found that the global security market’s 2011 figures were estimated to be worth some €100 billion($129BN) with around 2 million persons employed worldwide. The EU security market, at that time, had an estimated market value in the range of €26 billion to €36.5 billion ($33-$47BN) with around 180,000 employees. Security products in Great Britain alone is estimated to be worth about $16 billion.

Europeans are trying to develop better means for pre-emptively spotting “lone-wolf” militants, as reported by the Israeli newspaper, Haaretz.

With the above-mentioned in mind, one technology making an impact on predicting violence is VCA or Video Content Analysis software and its use in border crossing.  This program predicts human behavior when trying to identify individuals attempting to cause harm within certain perimeters like industrial complexes It recognizes repeat offenders and those on ‘wanted lists’.

This technology has developed new algorithms for image analysis, especially facial recognition systems. Video Content Analysis (VCA), also known Smart CCTV, is the technology within video surveillance that analyses and detects temporal and spatial events. Accordingly, the European video security surveillance market has grown at a Compound Annual Growth Rate of 8-10% over the past few years driven by rising concerns for security.

Other points SIR2 has found are efforts to fund new technologies through the European Investment Fund.

In addition to the EIF, The EU plans to run a 1.6bn venture capital fund to nurture innovative technology start-ups.

A Continuum of Funding

The danger posed by homegrown terrorists and foreign fighters from around the world with plans to return home has not diminished. Yet a continuum exists for further investments and commercial ventures.

Market and strategic research show an obvious relationship between terrorist strikes and new businesses created. Potential terrorist attacks in European capitals should be viewed from two opposite paradigms: increased threats due to extremist fighters returning to their respective countries and an increase in new innovations and business investments help create new jobs, increase the tax base and present new growth within various sectors of a country’s economic base that eventually contributes the EU to stay ahead of future attacks.

Because investments help in the innovation space, talent acquisition, R&D, supply chain efficiencies, and educational opportunities grow too. As voted in the brief there is room for growth friendly measures to where innovation and expansion become vital components to economies.

About the author:
*Dean Klovens, Managing Director, Strategic Intelligence Research and Resourcing. Dean has extensive experience in research & writing for business and public policy projects in areas of strategic intelligence to benefit leadership’s decision making. He earned his Master’s in Public Administration and Policy at DePaul University with a BA in Political Science at the University of Illinois-Chicago.