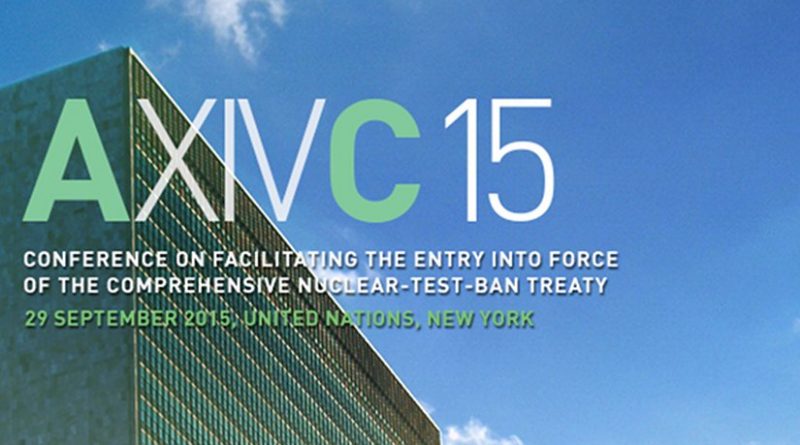 Ahead of a major international conference on September 29 at the UN headquarters in New York, pressure is mounting on the eight states whose backing is vital to the entering-into-force of the Comprehensive Nuclear Test-Ban Treaty (CTBT): China, the Democratic People’s Republic of Korea, Egypt, India, Iran, Israel, Pakistan and the United States.

Negotiated at the Geneva Conference on Disarmament and adopted by the United Nations General Assembly on September 10, 1996, the CTBT boasts 183 signatures and 164 ratifications, but remains hamstrung by the refusal of eight of the 44 so-called Annex II nations (those that possessed nuclear facilities at the time of negotiations) to sign and ratify the Treaty.

A comprehensive ban on nuclear testing is widely seen as an essential component of, and the final barrier to, global nuclear disarmament and a non-proliferation regime.

The upcoming Article XIV Conference (or the Conference on Facilitating Entry into Force of the CTBT) is expected to target these eight nuclear-weapons states, in the hope of paving the way to a legally binding norm against nuclear testing.

Speaking to IDN on the sidelines of the 25th UN Conference on Disarmament Issues that took place in the Japanese city of Hiroshima on August 26-28, Deputy Foreign Minister for Kazakhstan Yerzhan Ashikbayev explained that supporting the CTBT is a “natural stance” for his country, which will be co-chairing the September 29 Article XIV conference along with Japan.

The 18,000-square-km Semipalatinsk Test Site in northeastern Kazakhstan was the primary testing ground for the nuclear weapons programme of the now defunct Soviet Union. Between 1949 and 1989 the area endured some 456 nuclear tests, which directly impacted the health of an estimated 200,000 residents including an increased incidence of cancer and other conditions related to radiation exposure.

Given that 2015 marks the 70th anniversary of the U.S. atomic bomb attacks on Hiroshima and Nagasaki – resulting in upwards of 220,000 deaths – Japan is also naturally leading the diplomatic charge to prevent nuclear testing.

Acknowledging that the summit has a “big agenda” to tackle, Ambassador Kazutoshi Aikawa, Director-General of Disarmament, Non-Proliferation and Science Department with Japan’s Ministry of Foreign Affairs told IDN he is “hopeful that representatives from the eight [outlying] states will join us in making this meeting a success.”

In the five decades between 1945 and 1996 – the year the CTBT was adopted – the United States carried out over 1,000 nuclear tests and the Soviet Union conducted over 700. France also ran upwards of 200 tests during this time period, while the UK and China were each responsible for some 45 tests.

According to the Vienna-based Comprehensive Nuclear-Test-Ban Treaty Organisation (CTBTO), the body tasked with monitoring compliance with the treaty, only three countries have undertaken nuclear explosions since 1996: India and Pakistan (in 1998), and the DPRK (in 2006, 2009 and 2013).

In total, some 2,050 tests were carried out since the end of World War II in over 60 different locations around the globe. The CTBTO says these test sites “offer stunning contrasts”, from tropical South Pacific atolls (which served as testing grounds for the U.S., the UK and France), to Novaya Zemlya, the “remote ice-bound archipelago in the Arctic Ocean” that served for many years as the Soviet Union’s testing site.

With its global network of nearly 300 seismic, hydroacoustic, infrasound and radionuclide detecting stations, the CTBTO has made it much harder for states to conduct covert nuclear tests – be they in the atmosphere, underground, or underwater.

Yet without the eight crucial signatures of key nuclear weapons states, the Treaty is powerless to impose sanctions or other punitive measures on violators, even if tests are detected.

In an interview with IDN at the August disarmament conference, former United Nations Under Secretary-General for Disarmament Affairs Jayantha Dhanapala expressed concern about the “fragility” of the prevailing political reality vis-à-vis nuclear testing.

“We are aware the DPRK might test, and we’ve also heard from William Perry, former U.S. defense secretary, that Russian scientists are pressuring the political leadership of that country – which has signed and ratified the treaty – to resume testing,” he said.

“If this is true then there is a grave danger that the CTBT is in some kind of peril,” added Dhanapala, who also serves as president of the Pugwash Conferences on Science and World Affairs.

“Since the UN Security Council is the custodian of international peace and security, a unanimous resolution stating that the continuation of the moratorium against nuclear testing is a fundamental element of peace and security would help bolster the legitimacy of the CTBT,” he stated.

Indeed, the UN Secretary-General Ban Ki-moon himself has made personal appeals to the eight states to ratify the treaty.

In a statement delivered to the world body on September 10, the International Day Against Nuclear Tests, Ban said, “I have met with victims of nuclear tests. I have witnessed the lasting societal, environmental and economic damage nuclear tests have caused […]. Many have never recovered from the legacies of nuclear testing – including poisoned groundwater, cancer, birth defects and radioactive fallout.”

Welcoming the voluntary moratoria on testing imposed by many nuclear-armed states, Ban added: “Moratoria are no substitute for a CTBT in force. The three nuclear tests conducted by the Democratic People’s Republic of Korea are proof of this.

“Almost two decades after the CTBT was negotiated, it is long past time for the treaty to enter into force,” he concluded.

According to the National Resources Defense Council, nuclear tests carried out between 1945 and 1980 accounted for 510 megatons; of these, atmospheric tests alone yielded 428 mt – the equivalent of 29,000 Hiroshima-sized bombs.

While the amount of radioactivity released by each test depends largely on the size, scale and type of explosion, countless scientific studies have documented their adverse health and environmental impacts, including severe air and groundwater pollution, damage to flora and fauna and, for humans, injuries to internal organs, skin, eyes and even cells.

Ionizing radiation, the umbrella term for various particulate matter and rays given off by radioactive materials, is a scientifically proven carcinogen. Radiation exposure is known to cause leukaemia, as well as a cancers of the thyroid, lung and breast.

A chapter on the effects of nuclear tests on the CTBTO website explains that “studies and evaluations including an assessment by Arjun Makhijani on the health effects of nuclear weapon complexes, estimate that cancer fatalities due to the global radiation doses from the atmospheric nuclear testing programmes of the five nuclear-weapon States amount to hundreds of thousands.”

Furthermore, the CTBTO states, “A 1991 study by the International Physicians for the Prevention of Nuclear War (IPPNW) estimated that the radiation and radioactive materials from atmospheric testing taken in by people up until the year 2000 would cause 430,000 cancer deaths, some of which had already occurred by the time the results were published.

“The study predicted that roughly 2.4 million people could eventually die from cancer as a result of atmospheric testing.”

Given these grim realities, entering-into-force of the CTBT is an urgent task, but while many have admitted that ratification by all required parties is not an “if” but a “when”, even experts are hard-pressed to put an exact date on that “when”.

Asked when the CTBT will become a legal reality, Ambassador Sérgio de Queiroz Duarte, former UN High Representative for Disarmament Affairs and President of the 2005 NPT Review Conference told IDN, “This is what was once called the 60,000-dollar question. Now it is a 60-million-dollar question and soon it will be the 60-billion-dollar question but still – no answer.”

“The culprit is the situation of the world as it has evolved,” he said. “Powerful nations want to keep their power and privileges.”

At present, Ashikbayev estimates there are 16,000 warheads in the arsenals of nuclear powers, capable of “destroying the earth several times over.”

Data from the Arms Control Association suggest that Russia and the United States account for 90 percent of the global nuclear warhead inventory, with 7,700 and 7,100 weapons respectively. France follows at a distant third place with 300 warheads, while China boasts 250 weapons and the UK is in possession of 225.

Pakistan and India have 110 and 100 nukes respectively, Israel 80 and the DPRK 10 – though experts say these numbers are harder to verify.

Approximately 10,000 warheads are in military service and the remaining 6,000 are reportedly awaiting dismantlement, according to the Arms Control Association.