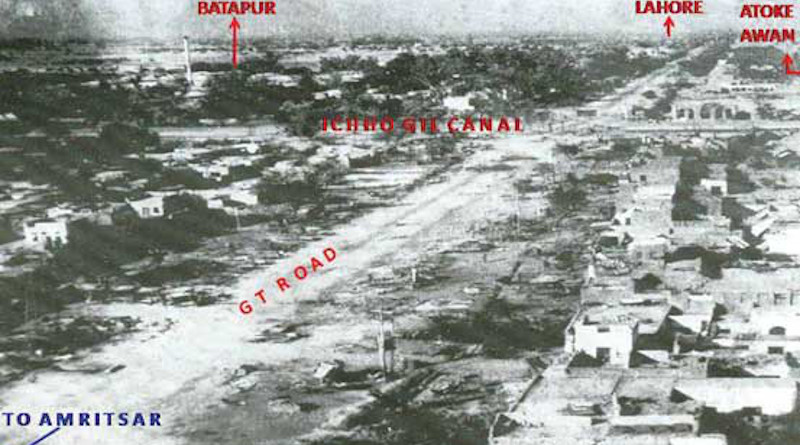 Battle of Dograi on outskirts of Lahore during the Indo-Pakistani War of 1965. Photo Credit: Sainiksamachar.nic.in

If one goes by tactical doctrines taught in army schools of instructions all over the world, then the attack launched by Third Battalion the Jat Regiment [3 Jat] of Indian army against well-fortified Pakistani defences in Dograi on outskirts of Lahore during the 1965 Indo-Pak conflict should not only have failed but have ended with its complete annihilation as all the odds were against this battalion. But not only did 3 Jat defy every parameter prescribed in tactical manuals considered essential for attacks to succeed, but it went on embellish history of warfare with a spectacular account of battle that will continue to stupefy armchair analysts as well as inspire soldiers.

In order to pose a direct threat to Lahore, 15 Infantry Division of Indian army was tasked to capture Dograi and cross the Ichoggil canal. To achieve this, 3 Jat was ordered to capture the intervening Pakistan army locality at Gosal Dial and once this attack succeeded, another battalion (15 Dogra) would move ahead and capture Dograi. The operations commenced on September 6, and 3 Jat, commanded by Lt Col [later Brig] Desmond E Hayde), crossed the international border (IB) at 4 AM and moved with such amazing stealth and speed that the enemy was taken by complete surprise.

Though 3 Jat succeeded in capturing Gosal Dial, thus clearing the way for 15 Dogra to capture Dograi, a problem cropped up. In the process of clearing the area from international border to Gosal Dial, 15 Dogra had suffered heavy casualties and so the task to capture Dograi and the bridge over Ichhogil canal was instead assigned to 3 Jat. Despite having just fought a battle, the brave Jats didn’t pause for a well-deserved rest, but instead immediately rushed forward and captured the bridge over Ichhogil canal.

The retreating Pakistan army’s attempt to demolished this bridge was partial- while it was rendered unusable for vehicles, but it could be still crossed by foot and taking advantage of this, Lt Col Hayde alongwith two companies crossed over and reached as far as Batapur. However, the exuberance of having secured a foothold over Ichoggil canal was short lived as 3 Jat was ordered to fall back to Gosal Dial on the same day due lack of reinforcements, non-availability of immediate replenishment on account of damages caused by Pakistan Air Force strafing of its administrative convoy and inability of the controlling Headquarters to be in communication with the unit.

This allowed Pakistan army to reoccupy Dograi and realising its importance, inducted additional troops who were supported by tanks to beat back any Indian attack. So, when 3 Jat was ordered to recapture Dograi on September 19, it was pitted against a formidable force level and to make matters worse, the enemy knew that the Indian army would reattempt capture of Dograi. In order to capture Dograi, [which was held by 16 Punjab less two companies, reinforced by elements of 8 Punjab, 2 Baluch, 18 Baluch alongwith recee and support detachments], it was essential to evict the enemy from Mile 13, which in turn was held by two companies of 16 Punjab.

The two phased attack plan entailed 13 Punjab capturing the enemy locality at Mile 13 in Phase 1 by midnight on the night of September 20/21, and thereafter 3 Jat would use this area as a firm base to attack Dograi from the North at 1.30 AM on September 22 and capture it in Phase 2. However, due to stiff resistance, the Mile 13 was only partially captured by midnight and this implied that Phase 2 would have to be delayed until Mile 13 was cleared of the enemy. But the audacious Lt Col Hayde wasn’t the type who would go by the book- not in war, atleast! So, he decided to go ahead with the attack on Dograi as planned.

Basic tactical doctrine stipulates that for any attack to succeed, the minimum attacker to defender ratio should be 3:1, as reduction in the same would invariably lead to failure. This meant that with four companies available, 3 Jat could have attacked only one company defended locality of the enemy at a time. This wasn’t acceptable to Lt Col Hayde because attacking enemy localities one by one would provide the defender the scope of either reinforcing the locality under attack or counterattacking captured localities by moving troops from positions not addressed and this could end in a failure for the attacker

Being as unconventional as he was audacious, Lt Col Hayde decided to attack the two-company strong locality of the enemy supplemented by additional detachments with two of his companies. The enemy was well entrenched and very determined but in the fierce battle that ensued and culminated in hand to hand fighting, the Jats proved to be more resolute.  Lt Col Hayde describes the situation thus: “Once my boys closed in with the enemy on the objective, very intense and severe hand-to-hand fighting had to take place, because it was difficult to get the enemy out of their trenches. The enemy for obvious reasons was not very keen to leave their trenches and we for very obvious reasons had to get in there and push them out…”

Lt Col’s Hayde’s daring plan assaulting Dograi keeping an attacker to defender ratio of even less than 2:1 worked and this remains an unbeaten record in the annals of modern warfare.

That the fall of Dograi was something that the Pakistan army couldn’t digest is evident from the fact that within 24 hours the enemy launched four determined counter attacks in an attempt to recapture this locality, but the indomitable Jats held their ground and beat them back. Had ceasefire not been declared on September 23, God alone knows how many more attempts the Pakistan army would have made. However, for 3 Jat, this spectacular victory came at a very heavy price- while five officers and 59 soldiers attained martyrdom, six officers, five Junior Commissioned Officers (JCOs), and 142 men were wounded.

But these weren’t the only casualties that 3 Jat suffered- since the commencement of the war till September 20, the battalion had lost one officer, one JCO and 23 soldiers, while three officers, three JCOs and 72 sustained injuries. In overall context, out of a total 552 all ranks that participated in these operations, 322 either gave the supreme sacrifice or sustained injuries on the battlefield. This translates into more than 58 percent casualties, implying that one out of six men of 3 Jat who fought the Battle of Dograi, either didn’t return home or came back with the ‘red badge of courage’.

So, while these figures speak volumes about the valour and sacrifices displayed by all ranks of 3 Jat, the ferocity with which the Jats fought can be gauged from the fact that while the enemy lost 305 soldiers, 108 all ranks (including Commanding Officer of 16 Punjab) were taken prisoners. Number of Pakistani soldiers who were injured and had been evacuated by retreating Pakistani troops, though not known is expected to be quite heavy. Besides this, 3 Jat and its affiliated armoured squadron from Scinde Horse destroyed six tanks and captured six others intact.

While the exemplary valour and sacrifice of all ranks is commendable, the fact that 75 percent of officers were either killed or injured clearly indicates that in keeping with the age-old ethos of the Indian army, these officers led from the front. The crowning glory for 3 Jat is that Lt Col Hayde was himself amongst those injured and by continuing to lead his troops in battle, this rare combination of  professional competence and personal courage proved that he was a true leader who “knows the way, shows the way and goes the way”.

Home » Battle Of Dograi: Victory Against All Odds – OpEd