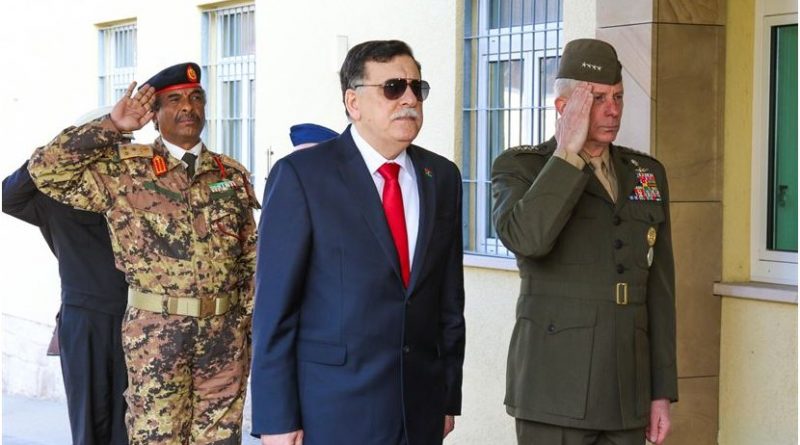 Libya’s Prime Minister Fayez al Sarraj announced he will hand over his duties to the next executive authority at the end of October. Sarraj is head of the Government of National Accord (GNA), based in Tripoli, while eastern Libya and much of the south is controlled by Khalifa Haftar’s Libyan National Army (LNA).

According to the UN, Sarraj made good progress in agreeing by a way to unify Libya’s fragmented state and prepare for elections. In early October 2015 the United Nations envoy to Libya, Bernardino León, proposed a National Unity Government for Libya, to be led by the Presidential Council of Fayez al-Sarraj, as prime minister, three deputies from the country’s eastern, western, and southern regions, and two ministers.

However, this national unity government was rejected by the internationally recognized legislature in Tobruk and the rival government in Tripoli. Sarraj, and six members of the Presidential Council and proposed cabinet arrived in Tripoli on March 30 2016.

Te civil war has drawn in regional and international powers with the United Arab Emirates, Egypt and Russia supporting the LNA and Turkey supporting the GNA. With Turkey’s help, Al-Sarraj and his internationally recognized government were able to control western Libya, and quash a year long offensive on the capital by eastern commander Khalifa Haftar.

However, Tripoli has since fallen into political infighting, and Sarraj has also faced pressure from a protest movement against corruption and poor services. Saraj has come under pressure while setting the stage for his exit after the Geneva talks. The warring sides will be urged to agree on a new presidential council structure that unifies the country’s dueling administrations and scheduled elections.

Additionally, tensions between Turkey and Greece, a country increasingly backed by France, a non-eastern Mediterranean state, have considerably escalated. France also recently sent warships to the region in a show of support to Athens, all of that because Libya opened the way for Turkey to control it. This decision will be expected to be welcomed by Haftar’s and his support Egypt and the United Arab Emirates while facilitating talks to unify the conflict-torn North African country that sits on the continent’s highest oil reserves. Haftar also opens a way to Parliament Speaker Ageela Salah, who has proposed a political initiative to unify the country’s institutions and is now leading political talks for the eastern camp.

As mentioned, there are tensions between the forces of the West. As such, Greece opened a dialogue with Turkey as both countries’ diplomats met at NATO headquarters in Brussels with the aim of reducing tensions.

Washington also urged calm from both countries, two NATO allies, offering its mediation to address their differences. Serraj’s departure could lead to new infighting among other senior GNA figures, and between the armed groups from Tripoli and Bashagha’s coastal city of Misrata that wield control on the ground. Experts said this is a wrong decision and it’s not the time ultimately, as it will leave the GNA as an entity, and western Libya a bit degraded.

An LNA blockade of energy exports since January 2020 has deprived the Libyan state of most of its usual revenue, worsening living standards and contributing to protests.

After Sarraj announced his intention to step down by the end of October, Erdogan told reporters in Istanbul, “A development like this, hearing such news, has been upsetting for us,” adding that Turkish delegations may hold talks with Sarraj’s government in the coming week. “With these meetings, God willing we will turn this issue towards the direction it needs to go,” Erdogan said. “The US backs Turkish political position in the Libyan civil war in order to limit Russian influence in the region.”

But France, Russia, and the UAE might try to spoil this new political arrangement, “I do not guess that they could.” says Bulovali.

As we see, there are many tensions in the region. Maybe the resignation is a result of Sarraj’s fear of the coming period, in which tensions will increase or the Western powers boiled over their anger turns against him, or because of Turkey’s support him. Thankfully, as of this writing, no major powers are ready to wage a war in the eastern Mediterranean.