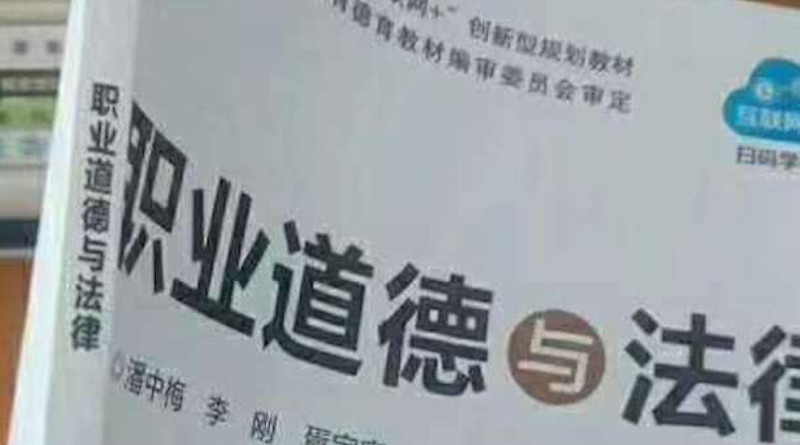 Part of the cover page of the school textbook that has caused a row in China. Its content distorted a Bible story to say Jesus killed a woman who committed adultery. (Photo: UCA News)

Catholics in mainland China are upset about the distortion of a Bible story in a school textbook, which claims Jesus Christ stoned to death a sinner woman in order to respect the law of the time.

The textbook, published by the government-run University of Electronic Science and Technology Press, aims to teach “professional ethics and law” to the students of secondary vocational schools.

The book quotes the story of Jesus forgiving the sins of a woman who committed adultery from the Gospel of John. But it has a changed ending.

The crowd wanted to stone the woman to death as per their law. But Jesus said, ‘Let the one who has never sinned throw the first stone.’ Hearing this, they slipped away one by one.

When the crowd disappeared, Jesus stoned the sinner to death saying, “I too am a sinner. But if the law could only be executed by men without blemish, the law would be dead,” the textbook said.

A parishioner who uploaded the textbook on social media said the distortion was an insult to the Catholic Church.

“I want everyone to know that the Chinese Communist Party has always tried to distort the history of the Church, to slander our Church, and to make people hate our Church,” his post said.

Mathew Wang, a Christian teacher at a vocational school, confirmed the content but said the textbook content varies from place to place within China.

Wang added that the controversial textbook was reviewed by the Textbook Review Committee for Moral Education in Secondary Vocational Education.

Wang said that the authors had used a wrong example to justify Chinese socialist laws.

The authors of the book, some Catholics said, want to prove that the rule of law is supreme in China, and such respect for law is essential for a smooth transfer to socialism with Chinese characteristics.

A Catholic priest who refused to be named told UCA News that distorting the original text itself “is against morality and the law, so how can we still teach professional ethics with this book?”

“It is a sad social phenomenon in mainland China,” he added.

Paul, a Catholic in mainland China, told UCA News that several such distortions of Christian life and history keep happening but Christian protests will have no impact.

“The same pattern has been repeated every year but the Church has never fought back or received the respect and apology it deserves,” said Paul.

Kama, a Catholic who manages the social media account of a Catholic group, said the textbook’s content violates religious beliefs, and authors and publishers must publicly correct it and apologize.

“We hope that church authorities will come forward and speak up for the Church,” Kama said.