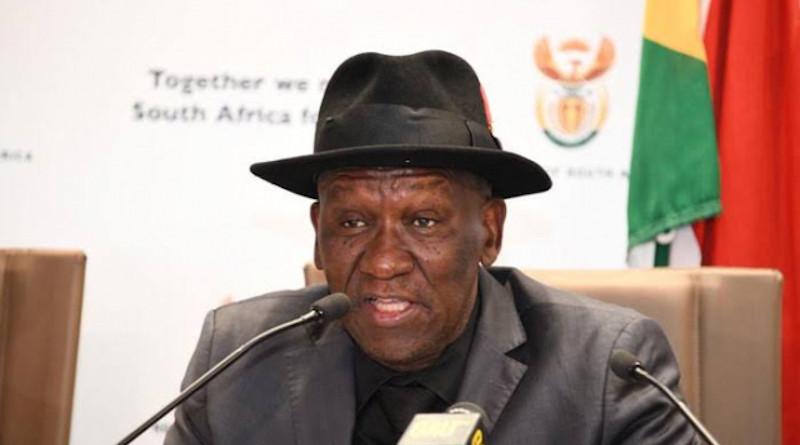 South Africa’s Police Minister Bheki Cele has issued a stern warning to those who will flout the rules, as the country further relaxes restrictions under lockdown level 1.

“We are aware that as the days get warmer and the restrictions are more relaxed, law enforcement will have to work harder to ensure they bring an end to any behaviour that threatens the containment of Coronavirus,” Cele told the media on Tuesday.

The Minister was shedding light on the overall picture of the policing landscape following President Cyril Ramaphosa’s announcement last week about the country moving to level 1.

He said the police would continue to maintain law and order and remain on high alert.

Cele announced that since the outbreak, 310 494 people have been arrested and charged with contraventions of the Disaster Management Act.

Cele said while social gatherings, including concerts and live performances are permitted, nightclubs are still closed.

Under level 1, no more than 100 mourners can attend a funeral, while night vigils are still not permitted.

“Communities are urged to be considerate when hosting social gatherings in residential areas. There are many complaints received of noisy and disruptive behaviour in people’s homes,” the Minister said.

Cele said the police will enforce the curfew, which starts from midnight until 4am.

He reminded citizens that the sale of liquor is permitted from 9am to 5pm from Monday to Friday, while no booze can be sold for off-site consumption over the weekend or during public holidays.

“Equally, alcohol cannot be sold as takeaways; it must be consumed on the premises where it was bought. It’s that simple,” Cele said.

He condemned the disregard of the rules by some liquor outlet owners.

“…[Some] businesses choose to flout the rules in the name of profit.”

The Minister had visited some outlets in Ekurhuleni during a police operation over the weekend.

“We came across several shebeens and taverns operating way past the stipulated 10pm curfew under alert level 2.

“More disturbing, was the practice of some liquor outlets squeezing patriots inside their venues with shut windows and doors.”

Those who are arrested are usually the owners and managers, while patrons are let go, Cele said.

He noted that some restaurants and eateries are also breaking the rules, putting their customers at risk of infection.

“I want to remind all the business owners who insist on flouting the rules – the long arm of the law will catch up with you, and you will also lose your operating licence.”

According to Cele, 16 539 officers have been infected by COVID-19 and has claimed 215 men and women in blue.

“However, I remain encouraged by the high recovery rate. Over 15 000 have won the battle against the virus and are back to serving their communities,” he said.

Cele said the virus is still “very much with us”, despite the further lifting of restrictions.

“People need to take responsibility for their own lives and that of their loved ones.”