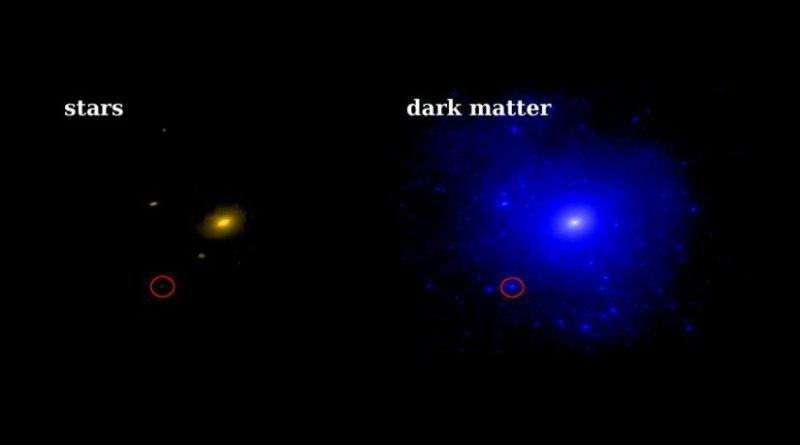 Dwarf galaxies have few stars but lots of dark matter. This Caltech FIRE (Feedback in Realistic Environments) simulation from shows the predicted distribution of stars (left) and dark matter (right) around a galaxy like the Milky Way. The red circle shows a dwarf galaxy like Triangulum II. Although it has a lot of dark matter, it has very few stars. Dark matter-dominated galaxies like Triangulum II are excellent prospects for detecting the gamma-ray signal from dark matter self-annihilation. Credit: A. Wetzel and P. Hopkins, Caltech

Dark matter is called “dark” for a good reason. Although they outnumber particles of regular matter by more than a factor of 10, particles of dark matter are elusive. Their existence is inferred by their gravitational influence in galaxies, but no one has ever directly observed signals from dark matter. Now, by measuring the mass of a nearby dwarf galaxy called Triangulum II, Assistant Professor of Astronomy Evan Kirby may have found the highest concentration of dark matter in any known galaxy.

Triangulum II is a small, faint galaxy at the edge of the Milky Way, made up of only about 1,000 stars. Kirby measured the mass of Triangulum II by examining the velocity of six stars whipping around the galaxy’s center.

“The galaxy is challenging to look at,” he said. “Only six of its stars were luminous enough to see with the Keck telescope.” By measuring these stars’ velocity, Kirby could infer the gravitational force exerted on the stars and thereby determine the mass of the galaxy.

“The total mass I measured was much, much greater than the mass of the total number of stars–implying that there’s a ton of densely packed dark matter contributing to the total mass,” Kirby said. “The ratio of dark matter to luminous matter is the highest of any galaxy we know. After I had made my measurements, I was just thinking–wow.”

Triangulum II could thus become a leading candidate for efforts to directly detect the signatures of dark matter. Certain particles of dark matter, called supersymmetric WIMPs (weakly interacting massive particles), will annihilate one another upon colliding and produce gamma rays that can then be detected from Earth.

While current theories predict that dark matter is producing gamma rays almost everywhere in the universe, detecting these particular signals among other galactic noises, like gamma rays emitted from pulsars, is a challenge. Triangulum II, on the other hand, is a very quiet galaxy. It lacks the gas and other material necessary to form stars, so it isn’t forming new stars–astronomers call it “dead.” Any gamma ray signals coming from colliding dark matter particles would theoretically be clearly visible.

It hasn’t been definitively confirmed, though, that what Kirby measured is actually the total mass of the galaxy. Another group, led by researchers from the University of Strasbourg in France, measured the velocities of stars just outside Triangulum II and found that they are actually moving faster than the stars closer into the galaxy’s center–the opposite of what’s expected. This could suggest that the little galaxy is being pulled apart, or “tidally disrupted,” by the Milky Way’s gravity.

“My next steps are to make measurements to confirm that other group’s findings,” Kirby said. “If it turns out that those outer stars aren’t actually moving faster than the inner ones, then the galaxy could be in what’s called dynamic equilibrium. That would make it the most excellent candidate for detecting dark matter with gamma rays.”