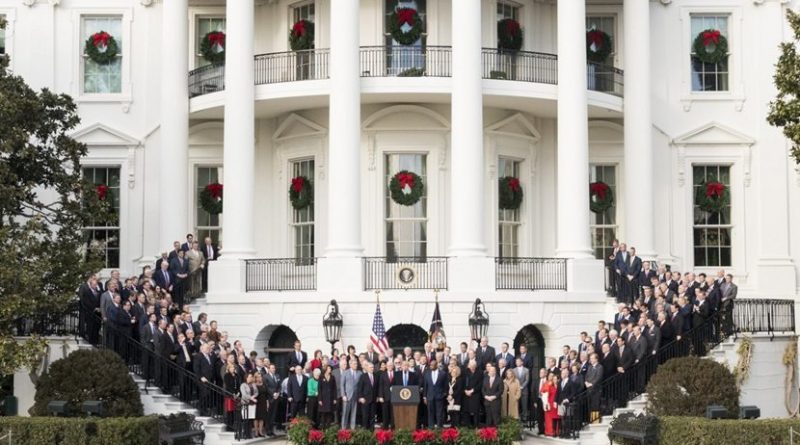 There could not be a greater difference between President Barack Obama’s first White House Christmas and President Donald Trump’s. Obama did not believe in exchanging Christmas gifts with his family; Trump does so lavishly.

The cover story of the July 23, 2008 edition of People magazine set the tone for how presidential candidate Obama would celebrate Christmas, if elected. Here is what it said. “The kids receive no birthday or Christmas presents from Mom and Dad, who spend ‘hundreds’ on birthday slumber parties….”

Trump’s first White House Christmas has the imprint of Melania Trump: she turned several rooms into a colorful display of epic proportions.

The theme “Time-Honored Traditions” included more than 18,000 feet of lights, 3,100 yards of ribbon, 12,000 ornaments and 53 Christmas trees. Most spectacular is the hallway of the East Colonnade: it is decorated like a winter wonderland of twinkling wintery branches. There is also a grand nativity scene in the East Room, and a stunning tribute to the armed forces in the East Wing.

Obama’s first White House Christmas was embroiled in controversy from the beginning. The following is from a news story in the New York Times published on December 7, 2009.

“When former social secretaries gave a luncheon to welcome Ms. [Desirée] Rogers earlier this year, one participant said, she surprised them by suggesting the Obamas were planning a ‘non-religious Christmas….’

“The lunch conversation inevitably turned to whether the White House would display its crèche, customarily placed in a prominent spot in the East Room. Ms. Rogers, this participant said, replied that the Obamas did not intend to put the manger scene on display—a remark that drew an audible gasp from the tight-knit social secretary sisterhood.”

When the reporter, Sheryl Gay Stolberg, asked the White House for clarification, she was told that “there had been internal discussions about making Christmas more inclusive and whether to display the crèche.”

After creating this polarizing moment, a nativity scene was reluctantly displayed. But this didn’t end the controversy. Genocidal maniac Mao Zedong, who was responsible for the deaths of 77 million Chinese people, was celebrated by the Obama White House: his picture adorned a Christmas tree ornament. Various drag queens were also honored.

There have been no reports of Trump honoring Stalin or sexual deviants.

Merry Christmas from the Catholic League.