(EIA) — The closure of HOVENSA, a major refinery in the U.S. Virgin Islands, is another in a string of Atlantic Basin refinery closures over the past several years.

With plans to turn the site into a product terminal, it continues the trend of companies shifting their focus from underperforming refining assets to other segments of the market. The closure of this refinery, which was the largest employer in the U.S. Virgin Islands, will likely have a major adverse impact on the economy of that U.S. territory.

The impact on the mainland United States is not as large, but is still significant, as it is likely to affect petroleum product markets in nearby areas and up the East Coast.

HOVENSA, a joint venture between Hess Corporation and the Venezuelan state company Petróleos de Venezuela, shut down the St. Croix refinery in mid-February and announced its intention to convert the site to an oil storage terminal. In a January 18 press release, HOVENSA cited operating losses in excess of $1 billion in the last three years alone – and projections of continued losses – due primarily to lower demand for petroleum products and the addition of new refining capacity in emerging markets as reasons behind the closure.

As an oil-fueled refinery, HOVENSA also identified its competitive disadvantage with mainland refineries fueled with low-priced natural gas as a factor underpinning the closure.

HOVENSA sent most of its product to the U.S. East Coast, but in recent years, it had increased its sales in other markets. In 2007, HOVENSA shipped two-thirds of its output to the East Coast; that share had declined to 55 percent in 2011 (through August). At the same time, the refinery’s output dropped in 2011 after HOVENSA announced it was reducing its capacity from 500,000 barrels per day (bbl/d) to 350,000 bbl/d.

Total U.S. East Coast product imports from the U.S. Virgin Islands, have also declined, falling from 307,000 bbl/d in 2007 to 158,000 bbl/d in 2011 (through November). Imports of jet fuel and certain other petroleum products (mainly residual fuel oil and unfinished oils) have dropped off almost entirely. 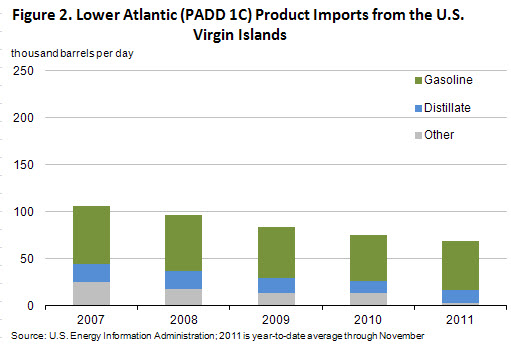 However, the U.S. Virgin Islands remained an important supplier of distillate and gasoline to the East Coast (Figures 1 and 2). In 2011 (though November), the U.S. Virgin Islands accounted for almost 30 percent of total East Coast distillate imports (second only to Canada), of which about 53 percent was ULSD, and 13 percent of regional gasoline imports (44 percent being RBOB).

While the U.S. Virgin Islands’ share of the East Coast’s total 2011 distillate supply has declined somewhat from previous years, its share of the region’s gasoline imports has remained relatively steady.

As discussed in an earlier This Week in Petroleum, the HOVENSA announcement closely followed closures of two refineries in the greater Philadelphia area and the potential shuttering of a third. The loss of product supply from HOVENSA is likely to impact New England and the Lower Atlantic more than the Central Atlantic, as the Central Atlantic used little supply from HOVENSA in 2011.

Options for alternative supplies include increasing shipments from other regions of the United States, boosting production at local refineries, and expanding imports from other sources. India’s Reliance Industries, for example, has been a small but growing presence in East Coast product markets, and has been cited in trade reports as leasing significant storage capacity in the Caribbean. Other emerging countries, particularly China and Saudi Arabia, are expected to strongly expand their refining capacity in the near- to medium-term.

The U.S. average retail price of regular gasoline increased almost 7 cents to $3.59 per gallon as of February 20, 2012, about 40 cents per gallon higher than last year at this time. Prices were up across all regions, with the largest increase coming on the West Coast due to a large 20-cent-per-gallon increase in California, the second largest week-over-week increase for the state since EIA started collecting data. The Midwest average price increased 5.7 cents to $3.46 per gallon, while the Gulf Coast price increased 4.8 cents to $3.48 per gallon. The East Coast price rose 4.2 cents to $3.65 per gallon, and had the largest increase compared to a year ago, at 48 cents. The cheapest gasoline remains in the Rocky Mountain region, where the price has been the cheapest all year and is currently $3.10 per gallon.