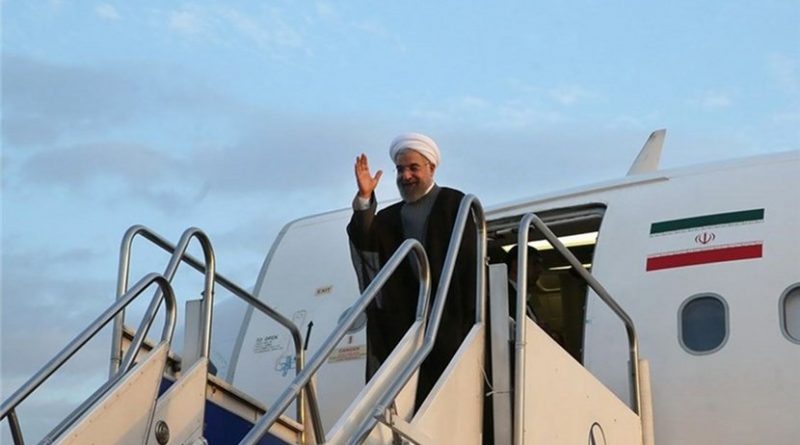 Whether it’s North Korea or Russia outsmarting “western naïfs,” the continued interpretation of realist, geopolitical foreign policy moves showing weakness and magnanimity that is never reciprocated; and has landed the United States (US) and other powers who signed the P5 + 1 agreement in a major bind.

Former President Obama wanted a world without nuclear weapons and the 2015 nuclear weapons agreement with Iran had the intention of rolling back their nuclear program and setting up a stringent compliance program.

However good intentioned Obama’s policies were they haven’t stopped Iran from continuing to make aggressive moves that violate the spirit of the agreement and taking advantage of concessions that has Ayatollah Khamenei, Iranian Revolutionary Guard Corps (IRGC), and the Quds Force more dangerous than ever.

These Iranian entities now have a “Shia crescent,” that is fortified with Iranian generals, Shia militias and Hezbollah enforcing the new Middle East.

The architect and face of Tehran’s Middle East ambitions – and newfound global clout is General Qassem Soleimani – who US officials credit with thousands of American soldiers deaths. It’s uncertain if General Soleimani controls Iran’s cyber attacks on the west, but the US Justice Department in late March charged:

“Nine Iranians and an Iranian company for attempting to hack into hundreds of universities worldwide, dozens of companies, and parts of the U.S. government, on behalf of Tehran’s government.” The Justice Department described the attacks, “as one of the largest state-sponsored hacks ever prosecuted.”

Here’s what decades of Iranian aggression, western appeasement and believing Iran will integrate into the world community has wrought. Iran went all-in saving Assad against democracy-seeking rebels in Syria and according to Foreign Affairs:

The Iran nuclear deal was supposed to curb these hegemonic behaviors and lead to economic integration; instead an Iranian airline under US sanctions violated the nuclear agreement by, “ferrying weapons and fighters into Syria repeatedly and bought U.S.-made jet engines and parts through Turkish front companies, investigators said in a mid-February recent government filing.”

And Syria is only getting worse when intelligence has surfaced that US officials are now monitoring regional reports, that with Iranian assistance,

“North Korea has neared completion of the construction of an underground military base located near Qardaha in Syria, the hometown of President Assad, that could be used for advanced weaponry and nuclear-related work.”

Moreover, Syrian news outlet, Zaman Al Wasi has reported, “according to satellite images and a military source the underground facility has been under construction since the beginning of the Syrian revolution in March 2011.” The U.S. State Department has monitored and condemned North Korea providing Assad with chemical weapons while knowing Iran is the main supporter along with their proxy, Hezbollah of the Syrian regime.

Realist, geopolitical moves then infer the recent Trump-Netanyahu meeting wasn’t about working towards Israeli-Palestinian peace or a solution to Syria; instead it was “how to show a common front versus Iran.” These are only some of the issues with Iran that has made President Trump want to completely change or scrap the 2015 nuclear deal entirely. Israel and the U.S. are also attempting to come up with a cogent, proportional response to Iran’s recent threats against Israel, Tel Aviv and Netanyahu along with Iran’s lethal, ballistic missile program.

The bone-chilling scenario is where Israel backs up there “never again,” slogan over the Holocaust and decides to use nuclear weaponry as a first strike option against Iran. Never again, means never again; and “the epicenter of genocidal, Jew-hatred,” unfortunately begins in Iran.

Unfortunately, it was west led by the former U.S. administration that erupted these troubles through cutting off crippling sanctions for engagement at all costs. From knowing and allowing Osama bin Laden, his family and close associates safe haven and passage in and out of Iran to, “the Obama administration hobbling a covert initiative (by the U.S. Drug Enforcement Agency) that tracked Hezbollah’s web of criminal activities, allowing millions of dollars to fall into the hands of Iran-backed militias,” according to a Politico report.

Further, an effort by former President Obama to bury Iran-sanctioned Hezbollah activities was the desire for a historic, post-presidential legacy that a nuclear deal with Iran would produce. The former administration also paid Iran $1.7 billion to release five Americans held by Iran, and the regime was allowed to do this without any repercussions. Even worse, according to The Washington Times, the U.S. government discovered the money ended up, “with Hezbollah, and the Quds Force, which has an extensive history of state-sponsored terrorism, and Houthi rebels in Yemen fighting the Saudi monarchy and government.”

Energy though is where western officials have some of their greatest concerns. The US, Britain, France and Germany are working to amend the Iran deal over worries that Iranian recalcitrant actions will drive up oil prices. Trump nominating hawkish, Iran skeptic John Bolton, as his new National Security Advisor doesn’t bode well for lower energy prices. Nor does Iran’s “elaborate oil sanction-skirting scheme,” help alleviate fears that Iran is using their oil and natural gas reserves as a weapon the way Russia weaponized, state-run, oil company Rosneft. Bloomberg did an extensive story on Iran skirting oil sanctions here.

Returning to Hezbollah, Iran and Israel – Hezbollah Secretary General, Hassan Nasrallah in a televised address in late February warned Israel about its claim to a oil and gas field off the southern coast of Lebanon called Block 9. Nasrallah said, “Hezbollah could disable Israel’s offshore oil installations within hours.” With oil and natural gas being the backbone of world and Middle Eastern economies this type of inflammatory rhetoric has caused Israel to warn Lebanon, Iran, Hezbollah and international oil and gas companies from participating in any tenders that doesn’t recognize Israel’s maritime rights and territorial waters. Hezbollah activists in Lebanon are now fanning the flames over these disputed oil and gas sites that could cause another war to break out between Hezbollah and Israel and spike oil and gas prices to levels not seen since 2014 when $100 a barrel oil was the norm.

But whom do you believe about Iran actions since before and after the nuclear deal? On one side is Vali Nasr, Dean Advanced International Studies at John Hopkins University who writes:

“Iran’s willingness to engage with the US over its nuclear program showed it is driven by hardheaded calculations of national interest, not a desire to spread its Islamic Revolution abroad.”

Or Mohammed al-Sulami, a Saudi columnist who has a PhD in Iranian studies who disagrees with Dean Nasr by writing, “that exporting Iran’s revolution is a pleasant euphemism for regional chaos.” What we know is that the battlefields of Syria, Iraq, Yemen, parts of Saudi Arabia, and Hezbollah’s influence in the global drug trade and illicit weaponry sales, Iran is the central figure.

Without understanding Iran’s regime type, history, hegemonic ideology or human nature the geopolitically shrewd Iranians – unless confronted – will eventually split apart the Middle East. Iran could be welcomed into the world community and flourish immediately with its young, literate and highly educated population – instead they choose authoritarian rule cloaked in religion – all in the name of stability that does nothing to loosen their iron-fisted governance. Iran will never change until their Islamic regime goes down into the dustbin of history. Here’s sincerely hoping it doesn’t come to total war between the US, NATO, Iran, Israel, Middle Eastern Sunni nations and all parties interested in the outcome.

3 thoughts on “The Continuing Issues With Iran – Analysis”