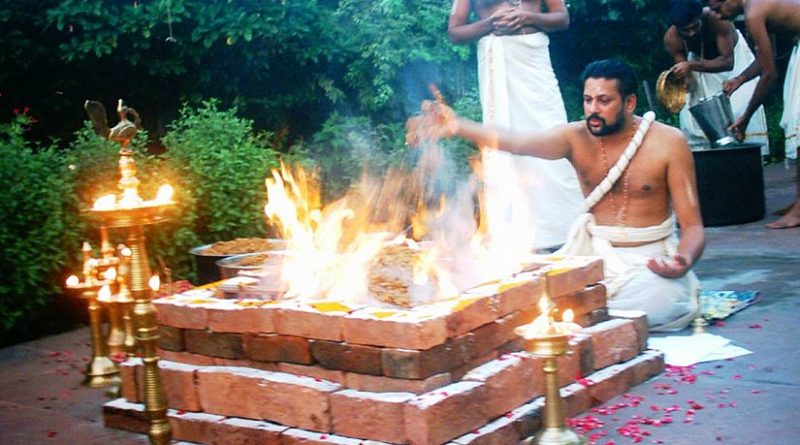 The Hindu rite of yajna being performed. Photo by Srkris, Wikipedia Commons.

Hindus will reportedly light 108 fires as a part of ancient Vedic ritual yajna in a sports ground in Port Shepstone town of KwaZulu-Natal in South Africa on “Freedom Day” (South Africa’s national day on April 27).

Yajna, an oblation made to a deity, is a Vedic ritual done in front of sacred fire with mantras; and is considered a conduit between universal and the individual and it activates that connection to maintain natural order for society/world.

This “Maha Yaj” in Marburg Sports Complex is hosted by Port Shepstone Hindu Cultural Federation together with other Hindu organizations. Various priests will participate in this yajna, which is planned to have 108 hawan kunds, reports suggest.

Meanwhile, Hindu statesman Rajan Zed, in a statement in Nevada, commended efforts of leaders of the Federation, other Hindu organizations and the area community for realizing this ancient Vedic ritual for the well-being of all.

Rajan Zed, who is President of Universal Society of Hinduism, further said that it was important to pass on Hindu spirituality, concepts and traditions to coming generations amidst so many distractions in the consumerist society and hoped that Federation and other area Hindu organizations would help in this direction. Zed stressed that instead of running after materialism; we should focus on inner search and realization of Self and work towards achieving moksh (liberation), which was the goal of Hinduism.

This free event is reportedly open to all where lunch will be served and hawan samagri will be provided free.  Guests include Dr. Rabbilas. Saths Singh is the chairperson of the Federation founded in 1992 “for the advancement of the Hindu community”.

Yajna is manifested in ancient Brahmanas and is based on the belief that all universal elements are interconnected.