(EIA) — While the price for gasoline this year has remained below $4 per gallon for most of the country, prices on the West Coast (PADD 5) have been holding above that level since late February. Since the national average price for regular gasoline peaked this year at $3.94 per gallon on April 2, prices across the country generally have been trending downward on the back of decreasing crude oil prices, with the national average falling to $3.71 per gallon on May 21.

In contrast, the average West Coast retail gasoline price remained at $4.24 per gallon on May 21, only two cents below its 2012 peak from a week earlier (Figure 1). While refinery issues have hit the West Coast particularly hard over the past few months, the imminent return of BP’s Cherry Point, Washington refinery should bring lower prices to gasoline consumers in the region. 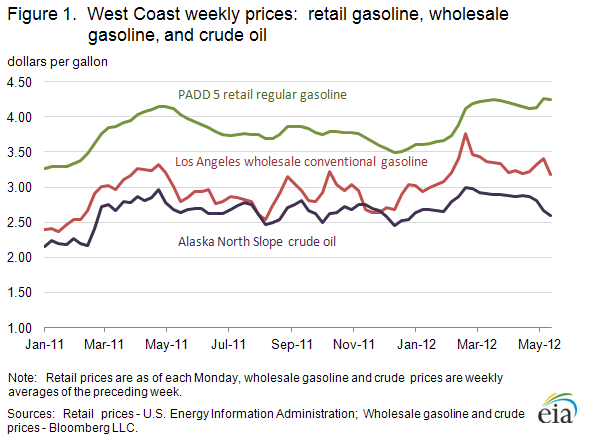 Abnormally low refinery runs on the West Coast since February tightened local gasoline markets, causing both wholesale and retail gasoline prices to rise. The West Coast gasoline market began 2012 in uneventful fashion, with gross inputs into PADD 5 refineries tracking their typical level during January, then edging downward as refiners underwent planned seasonal maintenance. Instead of trending back upward from early February as typically happens as refineries come back online following maintenance, runs this year continued to move lower, following a late-February fire at BP’s Cherry Point refinery in Washington and a string of unplanned outages at other plants. The Cherry Point plant is only now returning to service.

By mid-April, four-week average gross refinery inputs on the West Coast bottomed out at about 360,000 barrels per day (14 percent) below typical levels. Reduced refinery operations first put upward pressure on wholesale prices, which later translated into higher prices at the pump. Over the last five years, from March through May, retail prices in PADD 5 have typically averaged about 35 cents per gallon above those on the Gulf Coast (which provides a good baseline for comparison as the center of the U.S. refining industry). However, in 2012, West Coast prices over this period have averaged about 53 cents per gallon above the Gulf Coast, with that difference reaching as high as 75 cents per gallon on May 21.

While unplanned refinery outages generally cause retail product prices to rise, the West Coast market is especially sensitive to such shutdowns. That is because the West Coast market is relatively isolated. Given the West Coast’s lack of significant pipeline connections to other markets and relative distance from the active physical trading markets in the Atlantic Basin, outages there tend to cause more severe market dislocations as the logistics involved in backfilling supplies can be difficult.

For a period in March and early April, sustained higher wholesale prices did attract incremental imports to the West Coast, which provided some relief. However, persistently low refinery runs eventually translated into several weeks of inventory draws, which left PADD 5 gasoline inventories at 24.1 million barrels on May 18, about 5.1 million barrels (17 percent) below typical levels for that date, the lowest for the region since March 1999. The situation culminated the week of May 7, when market expectations of a Cherry Point restart were quashed as the restart encountered problems and had to be halted. Wholesale gasoline prices in Los Angeles shot up about 30 cents per gallon over the course of the week, and even more in Pacific Northwest markets, pushing the West Coast average retail price for a gallon of regular gasoline up to a 2012 high of $4.26 per gallon on May 14.

Gasoline prices on the West Coast, however, appear to be moderating. With widespread reports that the restart of the Cherry Point refinery is imminent, there has been a sharp reversal in West Coast wholesale prices over the last week. That change is starting to be reflected in retail prices. The average price for regular gasoline on the West Coast fell two cents per gallon last week to $4.24 per gallon on May 21. Experience suggests wholesale price changes tend to be fully passed through to retail prices over the course of about six weeks. This means if the wholesale market in PADD 5 is not subject to new disruptions, retail prices should see continuing downward movement in the coming weeks.

The national average diesel fuel price decreased more than 5 cents to $3.96 per gallon, 4 cents per gallon lower than last year at this time. This marks the sixth straight week of decline, with prices dropping in all regions for four of the last five weeks. The East and Gulf Coast both saw decreases of more than five cents to put prices at $4.00 per gallon and $3.86 per gallon, respectively. The Midwest price is now $3.85 per gallon, and diesel is $3.99 per gallon in the Rocky Mountain region. The West Coast price remains the most expensive in the Nation at $4.23 per gallon.

Another week of strong gains in propane inventories