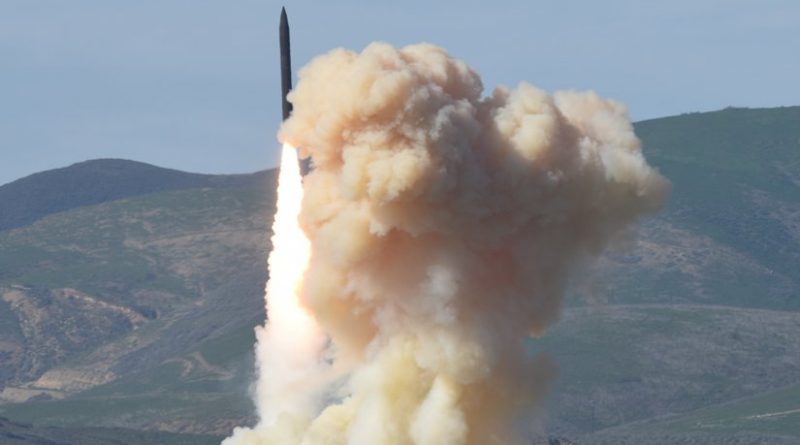 Periodically, an organization will publish a report or article critical of various elements of the U.S. ballistic missile defense system (BMDS). The homeland defense component of the BMDS, the Ground-based Midcourse Defense (GMD) system, has received the most scrutiny and criticism. For example, the Union of Concerned Scientists recently published a report repeating years-long and soundly refuted claims about GMD. The purpose of this document is to offer a more balanced, fact-based assessment of the purpose of the system, the rigors of the testing program, and the confidence the system enjoys among Democratic and Republican officials and military experts.

MYTH #1: The Ground-based Midcourse Defense (GMD) system does not work.

FACT: The director of operation test and evaluation (DOT&E) is responsible for assessing the results of tests conducted for each major Department of Defense (DoD) acquisition program. The 2015 DOT&E Report concluded that GMD has demonstrated the capability to defend against limited threats. Additionally, policymakers in both Republican and Democratic administrations, as well as senior military leaders, have repeatedly expressed confidence in the GMD system’s ability to intercept the kinds of threats posed by rogue state actors and in its critical contribution to the U.S. strategic posture. Recently, for example, Admiral William Gortney, commander of North American Aerospace Defense Command and U.S. Northern Command, stated that “we have high confidence in the ability of this system to defeat an ICBM [intercontinental ballistic missile] strike against the United States from an enemy with limited ICBM capabilities.” Lieutenant General David L. Mann, commander of U.S. Army Space and Missile Defense Command/Army Strategic Forces Command and Joint Functional Component Command for Integrated Missile Defense, recently told the Senate Armed Services Committee “the GMD system remains our Nation’s only defense against an ICBM attack.” He went on to state, “As the Secretary of Defense and various Combatant Commanders have previously testified, the Warfighter remains confident in our ability to protect the Nation against a limited intercontinental ballistic missile attack, even in the face of the changing fiscal environment.”

MYTH #2: The Missile Defense Agency (MDA) scripts its tests and is not subject to effective oversight.

FACT: The Missile Defense Agency develops and implements a rigorous testing program with intense scrutiny. MDA is subject to layers of oversight, including from the Office of the Under Secretary of Defense for Acquisition, Technology, and Logistics (OSD AT&L), the Missile Defense Executive Board (MDEB), Operational Test and Evaluation (OT&E), four congressional defense committees, and the Government Accountability Office (GAO). As authoritatively stated by the current director of the Missile Defense Agency, Vice Admiral James Syring:

MDA executes a fully integrated test program that synchronizes the system with the Warfighters trained to operate the system under varying wartime conditions against current and emerging threats. This ensures that BMDS capabilities are credibly demonstrated and validated prior to delivery to the Warfighter. We continue to work closely with independent testers within DoD—the Director, Operational Test and Evaluation; Deputy Assistant Secretary of Defense, Developmental Test & Evaluation; Service Operational Test Agencies; and Combatant Commands, represented by the Joint Forces Component Commands Integrated Missile Defense to develop an Integrated Master Test Plan to execute a robust, cost-effective flight test program. Our flight tests feature operationally realistic conditions and integrate U.S. government stakeholders—to include Soldiers, Sailors, Airmen, and Marines—and allies to prove BMD capabilities before they are fielded. From October 2014 to the present, we have executed 25 flight tests. For the remainder of FY 2016 we will conduct six more flight tests, and in FY 2017 16 flight tests. In addition to 22 element level ground tests, we conducted 11 developmental and operational system-level ground tests from October 2014 to the present. There are three more system-level ground tests scheduled for this fiscal year, and four more planned for FY 2017. Last year we also conducted or participated in more than 20 multi-event exercises and wargames, which are critical to the Warfighter and the intensive engineering efforts across the Agency. (Emphasis added)

MYTH #3: Exempting MDA programs from the standard DoD “fly before you buy” standard is foolish and increases the risks.

FACT: President George W. Bush withdrew the United States from the Cold War Anti-Ballistic Missile (ABM) Treaty in 2002 and issued a directive to deliver an initial GMD capability by 2004. The MDA follows the guidance of the 1999 National Missile Defense Act, signed into law by President William J. Clinton, which states: “It is the policy of the United States to deploy as soon as is technologically possible an effective National Missile Defense system capable of defending the territory of the United States against limited ballistic missile attack (whether accidental, unauthorized, or deliberate) with funding subject to the annual authorization of appropriations and the annual appropriation of funds for [NMD].” Allowing MDA to rapidly develop, test, and deploy the system was, and continues to be, a necessity. Before the first Ground-based Interceptors (GBIs) were deployed to Fort Greely, Alaska, the United States had nothing to defend against incoming ICBMs. The first GBIs fielded were never intended to be complete; it was always the plan to continue to test, improve, and increase the reliability of the system over time. Unfortunately, the Obama administration cut funding for GMD almost in half in the first budget of its first term. Some of the cuts came directly out of the program elements meant to improve the shortcomings of the system. Predictably, the program suffered testing failures as a result of the cuts. It is a true testament to the MDA’s discipline under its current director, Vice Admiral James Syring, that even in this resource-constrained environment, the program conducted a successful intercept test in June 2014, and the MDA continues to implement its plans to replace the current Exo-Atmospheric Kill Vehicle (EKV) with a Redesigned Kill Vehicle (RKV). The RKV is a necessary step on the way to the next-generation kill vehicle, which will have an enhanced capability to intercept multiple objects to better defend against potential decoys and counter-measures meant to confuse the system.

MYTH #4: Missile defense, even if technically possible, is destabilizing and creates an incentive for adversaries to invest in their offensive missile forces.

FACT: Missile defense systems are not the cause of adversaries’ offensive missile programs. Rather, U.S. missile defense systems are developed and deployed in response to the present and constantly developing threats posed by adversaries’ offensive missiles. It is because the United States has remained exposed to the threat of ballistic missile attack that rogue countries like Iran and North Korea seek a nuclear ballistic missile as a relatively affordable means of coercing much more capable adversaries. The more effective and robust the BMDS, the less likely countries are to devote resources to long-range missile programs to coerce the United States, since they believe the defensive system will be able to neutralize a first strike. Rather than scaling back U.S. strategic missile defense, the United States should devote significant resources to currently operational systems so that they can fulfill their technical potential, and to next-generation technologies to work towards a more robust defensive capability. An additional GMD site, with more GBIs at existing sites, would increase the reliability of the current system, even as the MDA continues to improve the accuracy of its EKVs. Additional radar will also improve the accuracy of the system and must be supported and deployed as soon as possible.

Russia often claims that current U.S. missile defense plans and deployments pose a threat to strategic stability and therefore create a need for increased investments in offensive capabilities. However, Russia has not always made this claim. When President Bush withdrew the United States from the ABM Treaty in 2002, President Vladimir Putin stated: “I can say with full confidence that the decision made by the President of the United States does not pose a threat to the national security of the Russian Federation.” He went on to express his commitment to further nuclear arms reductions. National objectives unique to each country and strategic relationships between countries determine how each nation’s leaders decide on the kind of weapons they will develop and deploy. Russia is objecting to U.S. missile defense plans as a means to further its own foreign policy goals, and so now is China. U.S. acquiescence to their demands to curb defensive plans only encourages China and Russia continue to object to future deployments and leaves the United States unnecessarily exposed to missile threats.

MYTH #5: Countries like North Korea cannot pose a credible nuclear missile threat to the U.S. homeland, and therefore, systems like GMD are a waste of money.

A recent Pentagon report on North Korea’s military capabilities warns that “North Korea is committed to developing a long-range, nuclear-armed missile that is capable of posing a direct threat to the United States.” It also affirms previous assessments that the North Korean regime is committed to improving its KN-08 ICBMs as well as extending the range of its long-range missiles. According to the report, “If successfully designed and developed, the KN-08 likely would be capable of reaching much of the continental United States, assuming the missiles displayed are generally representative of missiles that will be fielded.” The North Koreans have yet to demonstrate an actual nuclear long-range missile due to the significant challenges they face. Still, numerous U.S. military leaders warn that North Korea is far enough along that the United States must prepare to defend against this capability. Even if Pyongyang has not mastered accuracy for a nuclear-armed ballistic missile, it could still threaten the United States with such a missile, however inaccurate.

While Commander of U.S. Northern Command, Admiral William Gortney testified “While the KN-08 remains untested, modeling suggests it could deliver a nuclear (weapon) to much of the continental United States.”

Admiral Gortney has also noted that there are challenges in identifying the KN-08, making missile defense all the more critical. “It’s the relocatable target set that really impedes our ability to find, fix, and finish the threat,” Gortney said. “And as the targets move around and if we don’t have the persistent stare and persistent [intelligence, surveillance, and reconnaissance] that we do not have over North Korea at this time, that relocatable nature makes it very difficult for us to counter it.”

About the author:
**Rebeccah Heinrichs is a Hudson Institute Fellow and provides research and commentary on a range of national security issues, and specializes in nuclear deterrence, missile defense, and counter-proliferation.