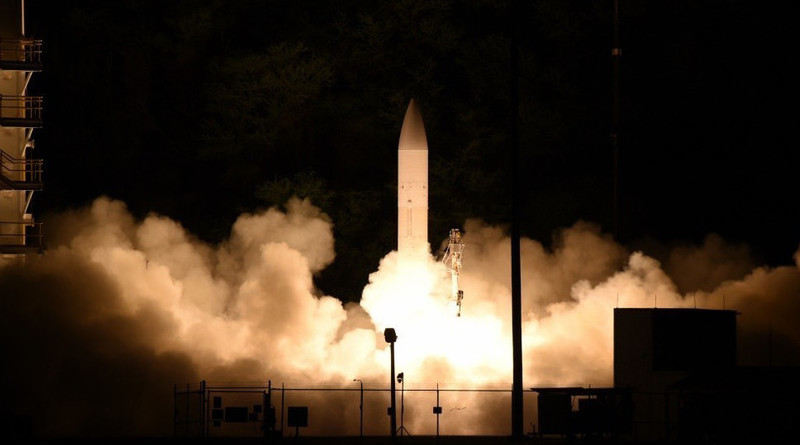 A common hypersonic glide body launches from Pacific Missile Range Facility, Kauai, Hawaii, during a Defense Department flight experiment, March 19, 2020. The Navy and the Army jointly executed the launch of the C-HGB, which flew at hypersonic speed to a designated point of impact. The Missile Defense Agency monitored and gathered tracking data from the experimental flight that will inform its ongoing development of systems designed to defend against adversaries’ hypersonic weapons. Photo Credit: US Navy

One of the Defense Department’s top priorities is developing hypersonic weapons capability, a particularly important goal, considering recent developments in this area by near-peer competitors China and Russia, the assistant director for hypersonics from the office of the undersecretary for research and engineering said.

Mike White, who spoke at the Institute for Defense and Government Advancement Counter Hypersonic Weapons Summit, said the department has taken a fast-track, four-phase approach.

Phase three will be in accelerated fielding of capability and weapons system prototypes to warfighters, White said, and phase four, starting with the fiscal year 2022 budget cycle, will be buying hypersonic weapons in numbers and delivering prototypes to the warfighter for future production buys in programs of record.

It’s an all-hands on deck effort, he said, with NASA, the Defense Advanced Research Projects Agency, the Space Development Agency, the Missile Defense Agency and national laboratories partnering in the effort to move this along expediently and effectively.

The Defense Department also recently stood up the Joint Hypersonic Transition Office to focus on creating a university consortium to aid in key science and technology aspects and to train the best and brightest for the next generation workforce. In addition to academia, industry partners will play the key role in delivering these weapons to the warfighters, White noted.

Much of the current focus is on offensive hypersonic weapons systems. The bulk of the investment is going to provide theater commanders with lethal, medium- and intermediate-range systems that will counter adversary efforts to deny access to U.S. forces in the air, land, sea and space domains, he said.

White said that the defensive side is much more difficult to predict and prepare for because hypersonic vehicles travel with unpredictable maneuverability at over five times the speed of sound at near space levels.

White said that the challenge is tracking and targeting those systems in the upper reaches of the atmosphere — 100,000 to 150,000 feet above the earth because new sensors and intercept vehicles and the associated architecture will need to be developed.