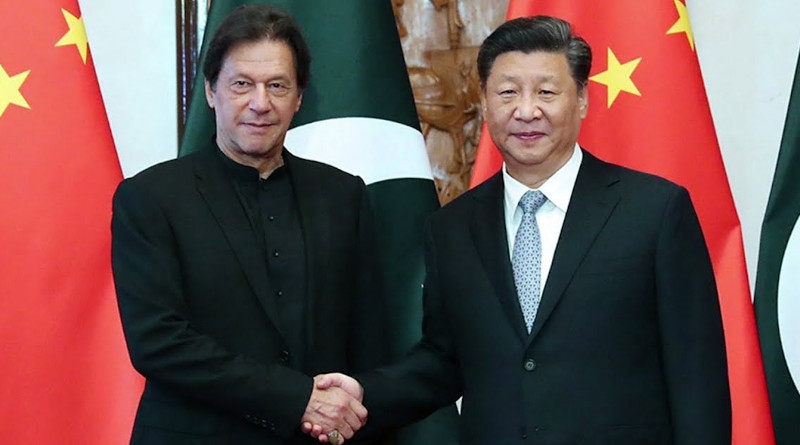 Pakistan PM Imran Khan in a riposte to Saudi Arabia’s hardened stand snub against Pakistan consequent to Pakistan Foreign Minister’s threats to the Head of OIC on Kashmir issue has post-haste despatched Foreign Minister Qureshi to China along with a public assertion that Pakistan’s future lies with China and that China too needs Pakistan.

Implicit in the above reaction of Pakistan PM Imran Khan are two consequential indicators of Pakistan’s unfolding reset of its foreign policy. Frustrated by Pakistan’s traditional backers, the United States and Saudi Arabia as the latest to snub Pakistan, the Pakistan PM as a last resort has unambiguously mortgaged Pakistan’s future to China.

Secondly with such a mortgage to China no political space exists for Pakistan now to indulge in its propensity of a rentier state cashing-in on to multiple foreign actors. Nor will China be permissive of Pakistan’s promiscuous dalliance with other nations in future.

Pakistan as my writings of recent years have highlighted stands already reduced to China’s South Asian colony much in the nature that the British East India Company reduced a disunited India in the 18th and 19th Century. Beginning with first establishing an economic stranglehold, the British ultimately reduced India to a British Crown colony exploiting its vast resources. In case of Pakistan it is Balochistan that China eyes both in relation to a naval base at Gwadar and Balochistan’s vast mineral resources notwithstanding the ongoing China-centric insurgency there.

Taking China first as the predominant actor in the China Pakistan Axis and since both China and Pakistan are in adversarial stances with India as an Emergent Power, many strategic thoughts come to the fore as the China-Pakistan Axis is primarily directed at India and tangentially against United States as the architect of the recently consolidated Indo Pacific Security template and the QUAD Grouping which is attempting to checkmate China’s increasing naval adventurism in Western Pacific and Indian Ocean.

The venue of the Chinese Foreign Minister’s meeting with the Pakistani Foreign Minister is intriguing and that is at Hainan Island—-China’s major naval base astride the South China Sea at which are located China’s nuclear attack submarines including some in undersea tunnels. Whether this choice of venue is just incidental or is it intended to send out political signals is debatable. But I would like to opt for the latter when it is borne in mind that China is engaged in capacity-building of Pakistan Navy (especially submarines) linked to expanding Chinese Navy signatures in the Indian Ocean and more pointedly in the North Arabian Sea.

China currently with the Galwan Valley military clashes with India in June 2020 in Eastern Ladakh as the context would be seriously concerned with India not buckling to China’s dictates and offering stiff resistance to disengagement without China withdrawing to April positions 2020. In that context more than the diplomatic content of the China-Pakistan Foreign Ministers Meet the subject of discussions could see China coordinating with Pakistan more in the military field.

The above for the very good reason that with India increasing its troop levels in Eastern Ladakh, China seriously perceives it as an existential threat to its illegal Aksai Chin Road traversing China Occupied Aksai Chin belonging to India and China and Pakistan also perceive that this is also a threat to the CPEC highway linking Sinkiang to Balochistan traversing Pakistan Occupied Kashmir—again territory belonging to India.

The most obvious focus would be as to how Pakistan Army can militarily complicate India’s military dilemma by exerting military pressure on India’s LOC and even further South. China can hold out inducements of expanded military outright aid fully gratis when Pakistan’s financial position is virtually on its knees.

India should therefore expect a torrent of Chinese military aid flowing-in to Pakistan for building Pakistan’s military capacity not only to resist any Indian Army ripostes but also to add offensive punch to Pakistan Army against India.

As part of China Pakistan Axis political signalling to India we can expect intensification of Joint Military Exercises between China and Pakistan. Naval exercises could intensify especially in submarine warfare.

Since Saudi Arabia has snubbed Pakistan on not convening an OIC Meet specifically on Kashmir it can be expected that Pakistan Foreign Minister will press China hard to internationalise the Kashmir issue by placing it on the agenda of discussion at the forthcoming UN General Assembly Session in September 2020.

China has been consistently raising Kashmir issue at various international forums and can be expected to oblige Pakistan consequent to current IOIC snubbing on Kashmir. As usual the PTM nations of Turkey and Malaysia can be expected to add their voice to that of China.

Of special concern for Pakistan for one-to-one discussions at the Foreign Minister’s level would be Pakistan’s expectations from China in the event of escalation on India’s borders from China’s military stances to China’s support globally in terms of diplomatic support.

The above can be expected when contextually Pakistan PM Imran Khan has been crowing from roof-tops that India may indulge in ‘False Flag- military operations against Pakistan.

While the Chinese and Pakistani expectations of each other stand discussed in brief above what needs also to be discussed here is also Pakistan’s frustrations with the OIC under leadership of Saudi Arabia and also the glaring shortfalls in financial aid and energy supplies that Saudi Arabia has been generously providing to Pakistan in decades past?

Also needs mention is the impact on Pakistan foreign policy in the Middle East with the signing of the recent Israel-UAE Accord. Where do all these Middle East developments leave Pakistan? Would Saudi Arabia be the next major Aram Monarchy to sign a similar Accord with Israel?

While China will certainly beef up Pakistan’s military capacities both for defensive and offensive warfare it is debatable whether China can fill up Pakistan’s financial voids and subsidised energy supplies? Chinese economy is slowing down and China’s flagship project in Pakistan, the CPEC, is facing delays in full implementation

Concluding, one need to highlight that Pakistan is in for some serious problems where Pakistan may really be heading towards being a ‘Failed State’ with no generous patrons to feed its propensities to box much above its geopolitical weight, China notwithstanding.

India has to be extra vigilant as the China Pakistan Axis is forced into a more clasping embrace due to prevailing geopolitical factors in play against them.