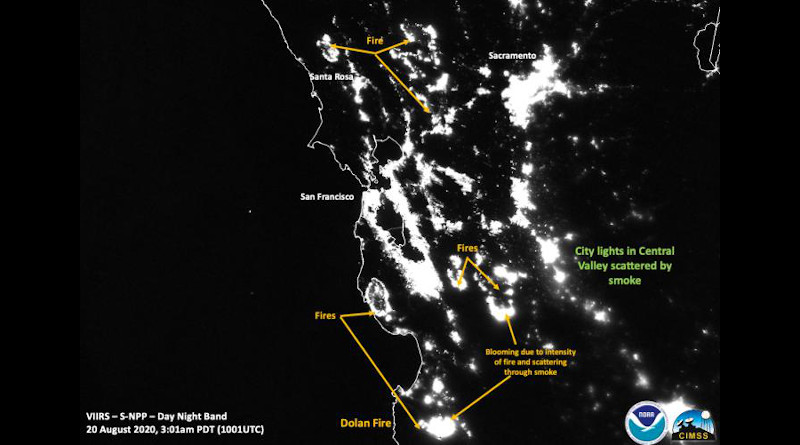 NOAA-NASA's Suomi NPP was able to image this nighttime image of the California fires on Aug. 20, 2020. This image does not have the Visible Fire Product active showing the outline of the fires. City lights are scattered in this image by smoke. Fires are noted. Credits: NOAA/NASA/William Straka U of W-Madison/CIMSS/SSEC

Striking images of the California wildfires are seen in these nighttime satellite images taken by the NOAA-NASA Suomi NPP satellite on Aug. 20, 2020.

At approximately 3:01 am PDT, NOAA-NASA’s Suomi NPP was almost directly overhead and imaged the regionusing different bands on its VIIRS (Visible infrared Imaging Radiometer Suite) instrument. Large fires are easily visible in this image. Suomi NPP’s day/night band clearly showed that lights in the Central Valley were being scattered by the smoke, from both the LNU and the SCU Lightning Complexes.

California is experiencing major, sustained wildfires across much of the state along with a heat wave that has produced what has been called a “heat dome” over much of the state. National Interagency Fire Meteorologist Nicky Nausler tweeted on Aug. 18: “7000+ lightning strikes have ignited 350+ fires including several large fires and complexes across central and northern California.” These storms produced more than 53,262 lightning strikes, although all were not cloud-to-ground and some were over the Pacific, according to the U.S. National Lightning Detection Network’s Chris Vagasky on Twitter. However, 13,845 were cloud-to-ground strikes. Some of the fires that were started due to those strikes have merged and become major complexes of fires such as the two largest complexes the LNU Lightning Complex and the SCU Lightning Complex. The amount of lightning that occurred over three and a half days is 9% of the amount that California usually sees in a year.

The LNU Complex of fire is currently 215,000 acres with 0% containment. The fire complex is made up of seven fires lit by lightning on Aug. 17 in the Napa Valley Area. The LNU stands for Lake Napa Unit which is the fire unit currently battling the blaze complex. The LNU fire complex now ranks as the ninth largest fire in California history. The second complex is the SCU complex which has consumed 157,475 acres and is 5% contained. This fire is a complex of over 20 fires and is located near Santa Clara where it is being managed by the Santa Clara fire unit.

Some of these fires are so powerful they are able to “create” weather systems of their own. Wildfires generate hot air that rises up creating an updraft. As the air rises up, moisture in the upper atmosphere cool and condenses the air into water droplets on the ash, also rising, which comes together as a cloud. A cloud that is produced by a fire is called a pyrocumulus or “fire cloud.” If the fire is large enough a pyrocumulonimbus cloud can be generated which is not only a fire cloud but a fire storm cloud which can produce winds and lightning, continuing the cycle with more fires being started. Updrafts can also produce tornadoes or even “fire tornadoes” when the updraft occurs so quickly that it creates a whirling effect, and a fire tornado is created.

The extended heat wave, the dry forest conditions, and unusual August storms all combined to create the current situation California finds itself in. Face masks, once worn just to ward off the novel coronavirus, have also become a way to shield residents from the effects of the smoke that is also blanketing the state.

Currently over 48,000 people have been evacuated in the state due to the current wildfire situation.

NASA’s satellite instruments are often the first to detect wildfires burning in remote regions, and the locations of new fires are sent directly to land managers worldwide within hours of the satellite overpass. Together, NASA instruments detect actively burning fires, track the transport of smoke from fires, provide information for fire management, and map the extent of changes to ecosystems, based on the extent and severity of burn scars. NASA has a fleet of Earth-observing instruments, many of which contribute to our understanding of fire in the Earth system. Satellites in orbit around the poles provide observations of the entire planet several times per day, whereas satellites in a geostationary orbit provide coarse-resolution imagery of fires, smoke and clouds every five to 15 minutes.