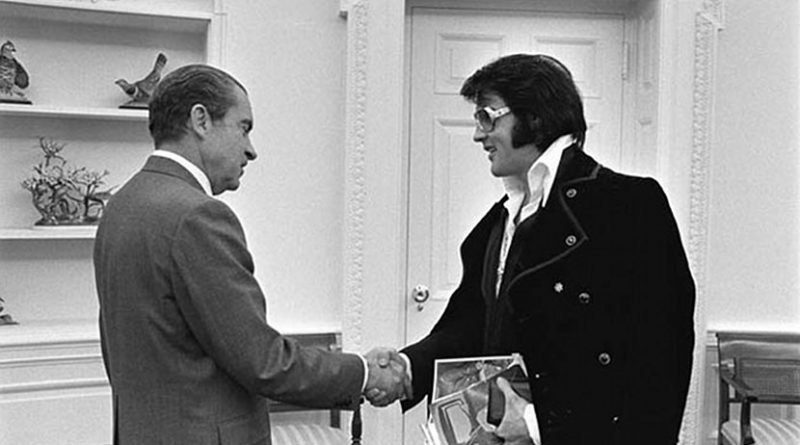 When Elvis Presley died in 1977 from drug abuse, he was an official, badge-carrying federal agent for the Bureau of Narcotics and Dangerous Drugs, an honorary appointment granted by President Richard Nixon.

To say that Elvis Presley had a respect for law enforcement is to drastically understate his enthusiasm.

In another life, he would have liked to have been a police officer, and he was obsessed with collecting police badges and uniforms. When he would perform shows around the country, he always made an effort to obtain a badge from the local police force, sometimes by using his celebrity status and other times by donating money to police functions. In some cases, he would offer a $5,000 donation to a police ball in order to procure a badge. He was also known to give expensive cars to local sheriffs, including Sherriff Bill Morris of Memphis who gratefully deputized Presley after receiving a gift of a Mercedes-Benz.

His generosity was so lavishly offered to members of the Denver police that it actually brought about suspicions of graft and corruption after the King’s death. Along with Cadillacs and Lincoln luxury cars, he paid for officers to take high-class vacations and gifted them with pricey jewelry. He purchased his own Denver police uniform and was made an honorary captain of the Denver Police Force. He would have been a police officer, Elvis once confided, but “God blessed him with a voice.”

In 1970, California senator George Murphy promised to get Elvis a meeting with FBI director J. Edgar Hoover and Bureau of Narcotics and Dangerous Drugs (BNDD) director John Ingersoll. In both cases, Elvis was hoping that a generous private donation would be enough to buy him a federal badge from each of these departments.

Elvis never did get to meet Hoover, and when called the BNDD, Ingersoll was out of the office. He spoke, instead, to the number-two man of the Bureau, Deputy Director John Finlator. The deputy director was not swayed by Elvis’s fame or money and informed him that his department could neither accept donations nor issue honorary badges. Elvis’s offer was spurned.

Undeterred, Elvis penned a hand-written letter to President Nixon. In the letter, Elvis expressed his concerns for the “drug culture, the hippie elements, the SDS [Students for a Democratic Society], Black Panthers, etc.” Offering his services as a celebrity communicator to the president, Elvis went on to say, “I can and will do more good if I were made a Federal Agent at Large.”

To help the president wage his war against the drug users, the hippies, and the communists, Elvis said, “all I need is the Federal credentials.”

On December 21, 1970, President Nixon agreed to meet the King. In full form, according to an interview given by Egil Krogh, Nixon’s aide who received Elvis, he arrived “in a purple jumpsuit and a white shirt open to the navel with a big gold chain and thick-rimmed sunglasses.” The meeting with the president got off to an awkward start, with Elvis complaining to Nixon about the difficulties of performing in Las Vegas and expressing his anger for The Beatles.

Finally, Elvis revealed his agenda. “Mr. President,” he said, “can you get me a badge from the Bureau of Narcotics and Dangerous Drugs?”

This is what Egil Krogh was worried about. He knew that Elvis had already been turned away by the BNDD on this exact matter. Nixon turned to Krogh, calling him by his nickname: “Bud, can we get him a badge?”

“Well, Mr. President,” Krogh answered, “if you want to get him a badge, we can do that.”

Nixon gave the order to get the King a badge, which elated Elvis so much that he crossed to the other side of the desk and gave the president a bear hug. Elvis then had his body guards bring in the gifts he had brought with him, which he lavished on the president and his aides, including jewelry for their wives. Before leaving, Nixon and Elvis posed for one of the most famous photographs ever taken in the Oval Office.

Elvis was now a badge-carrying drug warrior, and he carried his badge with him for the rest of his life, until he died seven years later from a drug overdose.

About the author:
*Chris Calton is a Mises University alumnus and an economic historian. He is writer and host of the Historical Controversies podcast. See also his YouTube channel here.