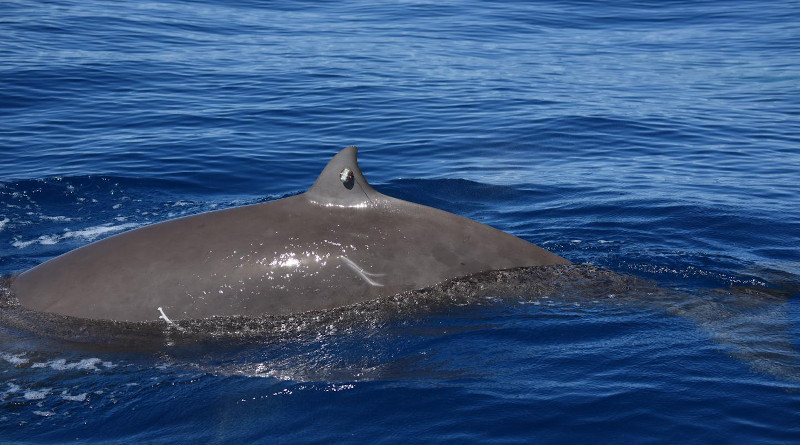 The blue whale might be one of the most enigmatic creatures on the planet, but the true megastars of the diving world are Cuvier’s beaked whales (Ziphius cavirostris). They are capable of reaching depths of almost 3000 m, and calculations suggested that these relatively diminutive whales should only remain submerged for about 33 min before their oxygen runs out and they resort to anaerobic respiration.

Yet experience told Nicola Quick and colleagues from Duke University, USA, that the shy mammals were capable of diving for far longer. Wondering how often the animals embark on these epic dives and how long it takes them to recover after returning to the surface, William Cioffi, Jeanne Shearer, Andrew Read, Daniel Webster (from the Cascadia Research Collective) and Quick went in search of the elusive animals in the abundant waters off Cape Hatteras, USA.

‘Because the animals spend so little time at the surface, we needed calm seas and experienced observers to look for them’, says Quick, adding, ‘the average period they spend at the surface is about 2 min, so getting a tag on takes a dedicated crew and a manoeuvrable vessel’. The brief surfacing periods also limited the amount of time available to transfer the precious information to a satellite each time the animals returned from a dive.

Deploying 23 tags over a 5-year period, the team recorded more than 3600 foraging dives, ranging from 33 min to 2 h 13 min, all of which were well in excess of the point when diving Cuvier’s beaked whales were thought to run out of oxygen. Knowing that approximately 95% of the dives performed by other mammals are complete before their oxygen supplies dwindle, the team rechecked their plot and realised that if the same proportion of Cuvier’s beaked whale dives are completed before their oxygen stores expire, then they could remain submerged for an incredible 77.7 min before resorting to anaerobic respiration. ‘It really did surprise us that these animals are able to go so far beyond what predictions suggest their diving limits should be’, says Quick.

In addition, the team picked up two extraordinary dives in 2017, which exceeded even their wildest dreams. One was almost 3 h long, while the other lasted 3 h 42 min. ‘We didn’t believe it at first; these are mammals after all, and any mammal spending that long under water just seemed incredible’, says Quick, publishing the discovery in Journal of Experimental Biology.

But, how long did it take for the whales to recover from dives of up to 2 h 13 min? After analysing the length of time between foraging dives – which exceeded 33 min – Quick was astonished that there was no clear pattern. Although one whale resumed diving for food within 20 min of a 2 h dive, another that had completed a 78 min dive spent almost 4 h making shorter dips and returning to the surface before initiating the next foraging dive. ‘Going into the study, we thought that we would see a pattern of increased recovery time after a long dive. The fact that we didn’t opens up many other questions’, says Quick.

Puzzled by the extraordinary resilience of the Cuvier’s beaked whale, Quick and Andreas Fahlman, from Fundacion Oceanografic de la Comunitat Valencia, Spain, suspect that the animals may have an exceptionally low metabolism, coupled with larger than usual oxygen stores and the ability to withstand stinging lactic acid building up in their muscles when they switch to anaerobic metabolism when dives exceed 77.7 min. Quick is also intrigued by the reasons behind the two record-breaking dives; ‘it may be that there was a particularly productive food patch,…there was some perceived threat…[or] some noise disturbance influenced these dives’, she says.