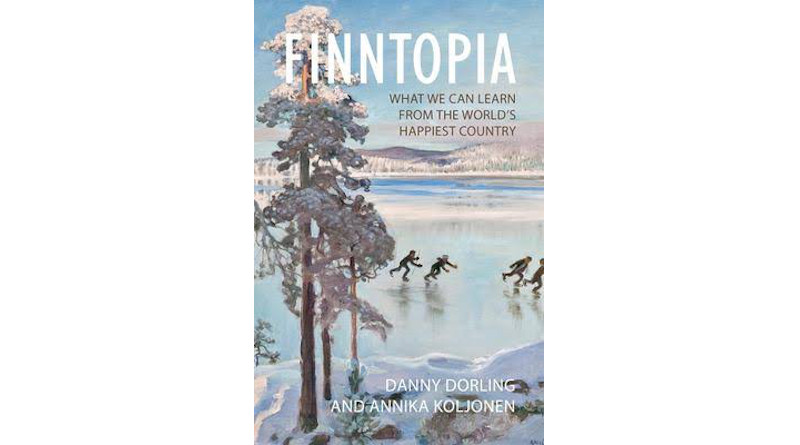 "Finntopia: What We Can Learn From The World's Happiest Country," by Danny Dorling and Annika Koljonen

Scandinavia has long been the stuff of legends… and I’m not talking about elves and trolls.  Westerners across the political spectrum, from Bernie Sanders to neo-Nazis, regularly commend these Northern European countries for their meteoric rise in indices of economic growth, income equality, low crime and overall happiness, among other measurables.  Though, funnily enough, many free-market conservatives try to make out socialist-adjacent Scandinavia to be some sort of giant Communist gulag.  The new book with the half-tongue-in-cheek title Finntopia: What We Can Learn from the World’s Happiest Country, by Danny Dorling and Annika Koljonen, explores these myriad claims in depth by focusing on the country of Finland.

Up until the 1950s, Finland had had a tough lot.  As the book explains, ““At different points in the past 500 years, Finland was a colony of Sweden, dominated by Germany, and controlled by both Denmark and Russia.”  Most Finns languished in rural poverty and a famine in the 1860s had killed off a tenth of the population.  Even after having gained independence in 1917, the country was immediately subjected to a short, but brutal, civil war that killed forty thousand working-age men.  Likewise, Finland suffered a lot during WWII, when it lost a substantial portion of its landmass and one of its largest cities to a Soviet invasion, and was subsequently occupied by Nazi Germany.

However, Finland managed to engineer a stunning turnaround, post-WWII.  More amazingly, as the book points out, is that Finland didn’t have the advantages of oil (Norway) or holdover wealth from an imperial era (Sweden, Denmark).  Ironically, Finland’s failed revolution of 1917 and WWII helped to set the path for social change.  Much of the Finnish elite were either killed, imprisoned for war crimes or were cowed into submissiveness by the two conflicts.  This paved way for the emergence of, “a significant class of peasant proprietors, or talonpojat.”  To this day, ““Hundreds of thousands of Finns are forest owners who depend on the forestry sector.”  This would help Finland to complete a transition from feudalism to social democracy,

Starting in the 1950s, leftwing ruling coalitions enacted sweeping reforms in worker’s rights, welfare, housing and many other issues.  Perhaps most significant was the education overhaul of the 1950s, during which time, “Finnish government funding and control of grammar schools was increased, and the pedagogical approach gradually changed from formal teacher-centred education focused on moral development (behaviour and conformity) to a focus on cognitive development based on new evidence emerging from educational research.”  The book details the many steps that Finnish society has taken to prioritize childhood development.  This starts from birth, when each newborn receives a 64-item care package from the government, in a wooden box that can double as a crib!  From the age of 3, toddlers are entitled to free or heavily subsidized daycare.  Interestingly, Finland doesn’t mandate schooling until a child turns 7.  Once a child reaches that lucky number, he’s treated to low class sizes, egalitarian (as opposed to economically or intellectually segregated) classrooms and schools, a 15-minute recess every hour, free lunch and classes taught by teachers who all have at least a graduate degree.  The latter was supported by, as imposed upon, the teachers’ union.  These reforms have led to the rise of one of the most educated groups of people in the world and a workforce well equipped to thrive in the STEM and service sectors.

Finland has also been at the forefront of labor rights.  The government has encouraged unionization; for decades, the vast majority of the workforce has been unionized.  This has resulted in some wonderful accomplished, like the high quality of schoolteachers mentioned in the last paragraph, and the incidents, “In the late 1960s, in which tripartite agreements were reached among the government, trade unions, and employers from the public and private sector and agricultural producers.  This policy aimed to tie wage increases to greater macroeconomic objectives… Wage growth restricted only for two to three years in this period [1960s to 1980] to retain the benefits of the devaluation for profitability. Harmonious labour relations, rising wages, more stable employment and broad national support for these income settlements were all dependent on rising external competitiveness.”  Small wonder that Finnish workers have had access to a steady income, one of the world’s most generous paid parental leave policies and some of the highest flexibility in terms of choosing work schedules, among other things.  Contrary to arguments made laissez-faire pundits in the West, the Finnish economy has skyrocketed since enacting this environment of worker empowerment.  The tripartite agreements created a healthy balance of power between employers and employees and empowered workers to work unhampered by discontent, which increased their productivity.

At the heart of these reforms has been a national ethos of solidarity.  Finns have long been cognizant of the long-term harm produced by inequality and extreme individualism.  It shouldn’t come as a surprise that, “A huge proportion of Finns, 79%, say they are ‘happy to pay their taxes”. An astonishing 96%, when asked, agree that ‘it’s important to collect tax to maintain the welfare state.’”  The Finnish parliament has likewise operated based on the principle of cohesion; it has always depended upon coalition-building in order to run, as there are many popular parties in Finland that prevent dominance by any single one.  As a result, the social welfare structure has survived largely intact after two spells of conservative (by Nordic standards) rule over the past three decades.

Scandinavia’s success hasn’t been contingent upon cultural homogeneity, small populations and geography, as many alt-right admirers like to argue when extolling the virtues of establishing their “white ethno-state”.  As the book points out, the Swedes and Danes were constantly subjugating each other and the other Nordic nation for centuries.  Finland fought a bloody civil war right after its independence, in 1917.  In terms of maintaining “purity of nationality”, the Nordic states score much higher on stability and happiness indices than Western countries like the US and UK, despite having populations with much higher refugee ratios.  Due to rapidly aging populations, Scandinavia actually benefits economically from influxes of working-age people from abroad.  The geography argument is particularly silly.  Finland’s neighbor Russia also has vast wilderness and extreme winters, but has been much more chaotic and impoverished for decades.  In terms of population size, there are many countries with smaller populations than Finland/Denmark/Norway (each has about 5.5M people) that are poor and chaotic, even some with abundant natural resources or ports, such as Equatorial Guinea and Djibouti.

Finntopia does a good job of exploring the historical and political forces that have driven Finland’s ascendence to a Top-5 ranking in most significant rankings of quality of life, such as student performance, homelessness, trust in government and the media, gender equality, air quality, etc.  The list is so extensive, that the book devotes a whole section to it at the end!  However, the book isn’t pure propaganda.  Dorling and Koljonen also criticize some negative trends, such as the rise of the far-right Finns Party (currently the largest opposition party), relatively tiny increases in some measures of gender and income inequality, rates of violence against African migrants, alcoholism, gambling and the youth unemployment rate.  They repeatedly and helpfully make pains to emphasize that Finland’s success has been mostly the result of long-term strategy, not luck or innate superiority.  Each chapter is written in a way that’s accessible to both academics and casual readers.  Visual learners will also be pleased by the book’s many charts and maps, as well as some quaint artwork from decades past.  I wish that the book had gone more into the nuts and bolts of Finland’s debate around environmental policy.  It only mentioned the controversy around nuclear power in passing and barely brought up solar, wind and hydro utilization and potential, though it did a better job of covering plans to lower pollution, over-logging and carbon emissions.  As a whole, Finntopia will allow readers to empathize with and take policy inspiration from the thin country sandwiched between Sweden and Russia, and might even compel them to touch down in Helsinki Airport, the top-rated airport in the world!

Home » ‘Finntopia: What We Can Learn From The World’s Happiest Country’ – Book Review

One thought on “‘Finntopia: What We Can Learn From The World’s Happiest Country’ – Book Review”