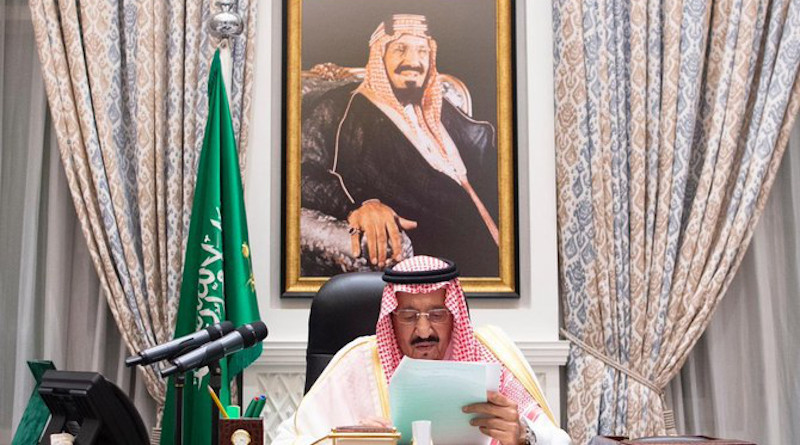 Saudi Arabia’s King Salman during his first address to the United Nations at the 75th UN General Assembly meeting, which was held virtually for the first time on Wednesday Sept. 23, 2020. Photo Credit: SPA

Saudi Arabia’s King Salman on Wednesday said Hezbollah must be disarmed for Lebanon to achieve security, stability and prosperity.

Last month’s Beirut port blast was a result of Hezbollah’s “hegemony” over the decision-making process in Lebanon by force of arms, he told world leaders at the 75th United Nations General Assembly.

King Salman also said the Iran-backed group had disrupted the constitutional state of Lebanon and vowed that the Kingdom would stand with the Lebanese people, particularly after the explosion that devastated large parts of Beirut and killed almost 200 people.

The blast was caused by a huge quantity of ammonium nitrate stored negligently at the city’s port.

On Iran, the king said Saudi Arabia has “extended its hands for peace” with Tehran and its dealings toward the Islamic regime over decades has been “positive and open.”

“But again and again, the whole world has seen the Iranian regime exploiting these efforts in increasing its expansionist activities, building its terrorist networks, using terrorism, and wasting the resources and wealth of the Iranian people to achieve expansionary projects that have only resulted in chaos, extremism and sectarianism.”

He said Iran’s aggressive approach was demonstrated last year when it targeted of Saudi oil installations in a missile and drone attack that were “in flagrant violation of international laws and an assault on international peace and security.”

He added that the attacks confirm Iran’s disregard of the stability of the global economy and the security of global oil supplies.

In reference to Iran-backed Houthi militants in Yemen, the king said Iran continues, “through its tools,” to target the Kingdom with ballistic missiles, with more than 300 missiles and 400 drones launched toward Saudi Arabia.

“Our experiences with the Iranian regime have taught us that partial solutions and attempts to appease have not stopped its threats to international peace and security,” he said.

Rather, he said there needs to be a “comprehensive solution and a firm international stance that guarantees a radical treatment of the Iranian regime’s pursuit of weapons of mass destruction, the development of its ballistic missile program, its interference in the internal affairs of other countries and its sponsorship of terrorism.”

On Yemen, he said the Iranian regime’s interference has led to a political, economic and humanitarian crisis that has brought suffering to the Yemeni people.

He said this interference constitutes a source of threat to the security of the region and its waterways that are vital to the global economy.

King Salman said the Houthis disrupt humanitarian aid to the Yemeni people, obstruct all efforts to reach a political solution and fail to respond to truce efforts.

The last cease-fire was declared by the Arab coalition fighting to restore the internationally recognized government last April in response to a UN request.

“We affirm that the Kingdom will not be complacent in defending its national security, nor will it abandon the brotherly Yemeni people until it regains its full sovereignty and independence from Iranian hegemony,” he said.

The king also said Saudi Arabia would continue to provide humanitarian support to Yemenis, and support UN efforts to bring peace to the country.

King Salman said the world had achieved important successes in confronting extremist organizations, including defeating Daesh’s control of lands in Iraq and Syria.

The Arab coalition had also struck important blows to Al-Qaeda and Daesh in Yemen, he added.

The king said Saudi Arabia has a responsibility to protect Islam from terrorist organizations, which “find a fertile environment to appear in countries experiencing sectarian divisions, weakness and collapse of state institutions.”

On the Palestinian-Israeli conflict, he said the Kingdom supports all efforts aimed at advancing the peace process.

Saudi Arabia launched the 2002 Arab Peace Initiative, which called for the establishment of an independent Palestinian state with East Jerusalem as its capital.

“We also support the efforts made by the current US administration to bring peace to the Middle East by bringing the Palestinian and Israeli sides to the negotiating table to reach a just and comprehensive agreement,” he added.

Last week, the UAE and Bahrain became only the third and fourth Arab counties to recognize the state of Israel and formally established diplomatic relations in a US-brokered signing ceremony hosted at the White House. He said the Kingdom also supports the peaceful solution in Syria, the exit of militias and mercenaries, and the preservation of Syria’s territorial integrity.

King Salman condemned foreign interference in Libya and called on all Libyan parties to come to the negotiating table and “stand together to preserve the unity and integrity of Libya.”

He said the Middle East region has for decades suffered from “the forces of extremism and chaos” but that Saudi Arabia has chosen a future path based on the Kingdom’s Vision 2030, through which it aspires to be a “pioneering economy” and “interactive society.”

On the coronavirus pandemic, he said the world faces a major challenge, “which demonstrated the urgent need for everyone to join hands to face common challenges to humanity.”

“The Kingdom, as chairman of the G20, continues to push forward the international response efforts to deal with the pandemic and address its humanitarian and economic impacts.”