Endorsement by FIFA would allow Prince Ali to present the request the secretive International Football Association Board (IFAB), the game’s lawmakers, to rule in favour of a headdress that meets the board’s health and safety standards as well the demands of observant female Muslim players.

The AFC’s women’s committee, headed by AFC vice president Moya Dodd, requested Prince Ali to seek the “favourable reconsideration of the issue by the IFAB at the earliest opportunity.” 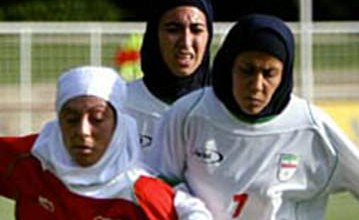 Prince Ali is expected to raise the issue at FIFA’s next executive committee meeting in Japan on December 6. If backed by the world soccer body, Prince Ali, could take the issue to IFAB – whose members are Britain, Wales, Scotland, Northern Ireland and FIFA – next spring.

“I am very pleased that the AFC executive committee has endorsed the case for reviewing the Laws of the Game in favour of allowing a safe headscarf. This is a crucial step forward. “Our goal at the end of the day is to ensure that all women are able to play football at all levels without any barriers. I would particularly like to thank AFC vice-president Moya Dodd, who chairs the women’s committee, for her valuable work on the issue,” Prince Ali said in a statement.

The dispute over observant Muslim women player’s headdress led in June to the disqualification of the Iranian women’s national team after they appeared on the pitch in the Jordanian capital Amman for a 2012 London Olympics qualifier against Jordan wearing the hijab. Three Jordanian players who wear the hijab were also barred.

FIFA bans the wearing of all religious and political symbols on the pitch.

The Iranian team’s insistence on wearing the hijab contradicted an agreement reached last year in Singapore between FIFA and the Iranian Football Federation (IFF) under which the Iranians agreed to the wearing of a cap that covered hair but not the neck.

The AFC women’s committee mandate follows a gathering in Amman last month at which prominent soccer executives, women players, coaches agreed at a brainstorm in Amman that the hijab is a cultural rather than a religious symbol. The meeting was convened by Prince Ali, a half-brother of Jordanian King Abdullah, who was elected to the FIFA executive committee late last year on a platform that called for great women’s rights.

“The hijab issue has taken centre stage in football circles in recent years due to the increasing popularity of women’s football worldwide. It is a cultural issue that not only affects the game, but also impacts society and sports in general. It is not limited to Asia, but extends to other continents as well,” the executives and players said in a statement issued at the end of their brainstorm.

By defining the hijab as a cultural symbol, the group, meeting under the auspices of the Asian Football Development Project (AFDP), an NGO founded by Prince Ali to advance grassroots, youth and women’s soccer, hoped to lay the groundwork for a compromise that acknowledges the cultural requirements of observant Muslim women and meets FIFA’s health and safety standards.

In doing so, the group, which included FIFA Executive Committee member and head of the body’s medical committee Michel D’Hooghe, Moya Dodd, members of FIFA’s women committee as well as representatives of the soccer bodies of Jordan, Bahrain, Iran and the United Kingdom, hope to work around FIFA’s ban on the wearing of religious or political symbols on the pitch.

Soccer executives said privately that the issue of the hijab had been complicated by the fact that the ban of the hijab on the pitch is based on a ruling by the IFAB that is open to interpretation by referees which has led to differing rulings on the pitch. It was the referee’s decision in June that led to Iran’s disqualification.

“The rules have to be adapted to the evolution of the game and the society or interpreted accordingly,” the group said, noting that “FIFA is committed to the basic principles of non-discrimination and allows on this basis the use of the head covering.”

The group said “safety must remain the most important consideration for the use of hijab.” It said that FIFA would coordinate accelerated research to ensure that the hijab or headdress worn by women on the pitch ensured safety in the game. It called on FIFA to consider “innovative designs …. with full consideration of medical aspects, particularly safety, aesthetic arguments, type of material.”

The group said that FIFA should weigh lower safety risks against the greater health benefit of women playing soccer and asserted that allowing the hijab would persuade more women to become players and empower them across cultures.

Farideh Khanom Shojaei, a member of the Iranian soccer body’s women’s committee, and Houshang Moghaddas, the international relations advisor to IFF President Ali Kafashian, have praised the effort to seek a compromise.

They suggested however that final agreement on a compromise could still prove difficult. “The neck is very important,” Ms. Shojaei said, suggesting that Iran would insist on a design that covered not only the hair but also neck.

Ms. Shojaei and Mr. Moghaddas acknowledged that the fact that the hijab is compulsory for Iranian women players and that Iran imposes the wearing of the hijab on foreign teams playing in the Islamic republic was likely to remain an issue even if FIFA and IFAB adopt the group’s principles. Iran is the only country that has made the hijab compulsory for its players as well as for visiting foreign teams.