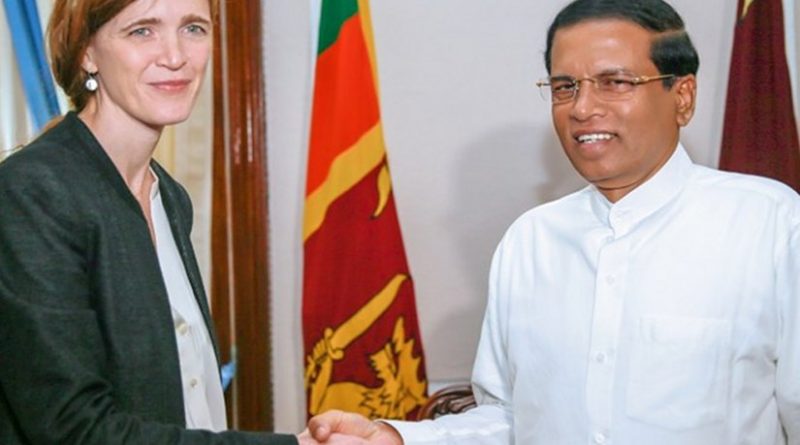 US Permanent Representative to the United Nations Samantha Power commended the commitment of the Sri Lankan government for a sustainable reconciliation during past ten months.

She made these remarks when she visited President Maithripala Sirisena on Monday at the Presidential Secretariat.

Power said the new government is performing in a more trustworthy and acceptable manner in implementing of the process of reconciliation. She suggested broadening the relationships between the officials and the institutions who are implementing this program.

“It is commendable that the President of Sri Lanka, Maithripala Sirisena is giving up the power while the leaders of Asia and Africa are trying to centralize the power in their hands. This is a worthy example for the world leaders,” Power said.

Power stated these new political reforms in the country would definitely result in economic benefits. “Sri Lanka will emerge as a beacon light due to them”, she said. She also said the international community is observing the new program of Sri Lanka.

Sirisena pointed out here that they have to work with different types of social groups with different ideologies inn this regard and Sri Lanka is a country which faced many challenges. “In that context the government has the responsibility to act patiently,” Sirisena said.

Sirisena apprised the Ambassador regards the steps taken by the government during the past ten months to ensure freedom, strengthen democracy and eliminate poverty.

Sirisena said that he was able to hand over the power to the Parliament and to the independent commissions which was centered on executive presidency.

Sirisena further said that the government will continue to work with commitment to the release of lands in the North and resettlement process for the remaining displaced person as well as the development of those areas.

Mr. Atul Keshap, US Ambassador to Sri Lanka, also participated in this event.