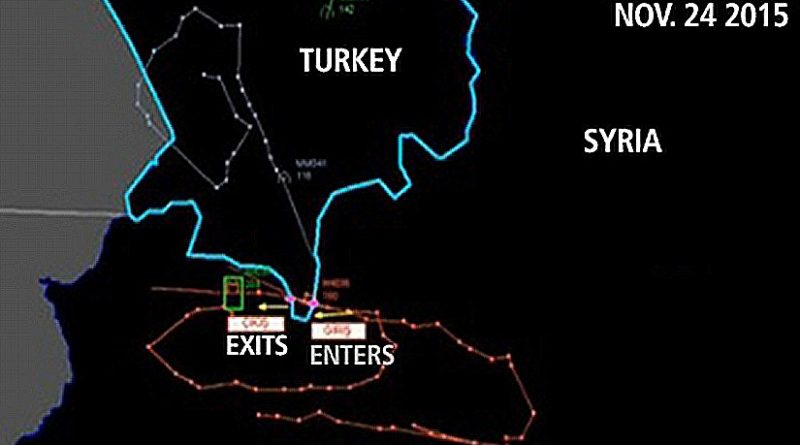 The New York Times reports: Turkish fighter jets on patrol near the Syrian border shot down a Russian warplane on Tuesday after it violated Turkey’s airspace, a long-feared escalation that could further strain relations between Russia and the West.

The Russian Defense Ministry confirmed that one of its jets, a Sukhoi SU-24, had crashed in Syria but said it had been downed “presumably as a result of shelling from the ground.”

The Russian Defense Ministry also asserted that, “The plane stayed exclusively above the territory of Syria throughout the entire flight,” and said that the two pilots had ejected.

The Turkish military did not identify the nationality of the plane but said in a statement on its website that its pilots fired only after repeated warnings to the other warplane.

“The aircraft entered Turkish airspace over the town of Yaylidag, in the southeastern Hatay province,” the statement read. “The plane was warned 10 times in the space of 5 minutes before it was taken down.” [Continue reading…]

The finger of Turkish territory crossed is less than two miles wide. An aircraft flying at 600mph would take less than 10 seconds to enter and exit.

Given the warnings they have already received from Turkey, it’s hard to imagine that Russian pilots don’t pay close attention to their proximity to the Turkish border and, for that reason, it seems somewhat unlikely that this infringement was accidental.

At the same time, if this was a calculated provocation, it seems likely that it was calculated to be a taunt so brief that it would not result in an armed response.

My guess — nothing more than that — is that the Russians will protest loudly while much more quietly looking for ways to deescalate.

Bloomberg reports: President Vladimir Putin accused Turkey of being accomplices of terrorism for shooting down a Russian warplane in Syria, warning of “very serious consequences” for relations.

“We understand that everyone has their own interests but we won’t allow such crimes to take place,” Putin said at talks with Jordanian King Abdullah in Sochi. “We received a stab in the back from accomplices of terrorism.”

Putin spoke after Turkey said two F-16 jets shot down a Russian warplane that violated its airspace near the border with northwestern Syria, roiling global markets and marking the first direct clash between foreign powers embroiled in the civil war. Russia’s Defense Ministry denied the plane had ever crossed the border and said it may have been hit by ground fire. Turkey’s action is the first time in decades that a member of the North Atlantic Treaty Organization has downed a Russian military aircraft. [Continue reading…]

On October 6, Russia’s state-owned news agency, Sputnik, reported: The US and Turkey have threatened to shoot down Russian warplanes if they stray into Turkish airspace, following two accidental, momentary violations of the Syria-Turkey border by Russian military aircraft.

“Turkey’s rules of engagement apply to all planes, be they Syrian [or] Russian…Necessary steps would be taken against whoever violates Turkey’s borders, even if it’s a bird”, the Brussels-based online newspaper EUobserver quoted Turkish Prime Minister Ahmet Davutoglu as telling the TV broadcaster HaberTurk on Monday.

US Secretary of State John Kerry concurred, saying the violation might result in a ‘shootdown’. [Continue reading…]