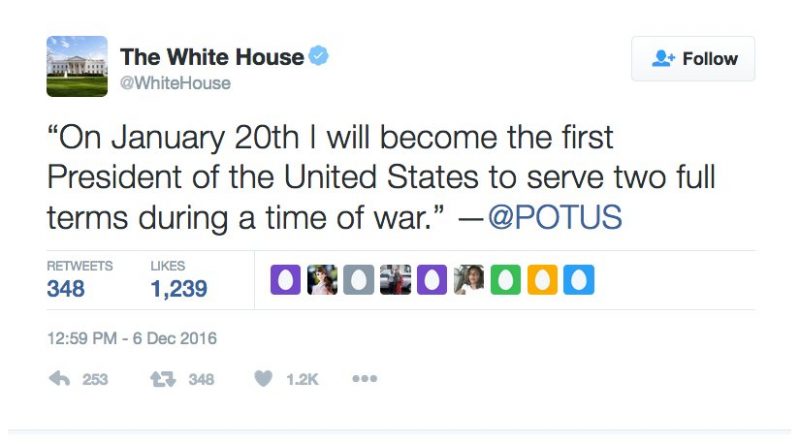 The above is an actual TWEET of a line from a speech that Barack Obama gave at MacDill AFB on December 6th.

The reaction of the crowd was to cheer for that line, but even though even Obama can’t control what thugs applaud in his speeches, one can tell that he is proud of the fact that he has been a war criminal for all eight years of his regime.

One would think that The White House intern in charge of twittering wouldn’t tweet something that he/she thought would bring shame on POTUS–so I come to the conclusion that Obama is just as proud to be a war president as Bush was.

Then Obama went on to say, “We did not choose this fight.” Of course, the USA was an innocent bystander on September 11, 2001. It’s a given that the US only spreads goodwill and material aid around a planet that adored “The Great Satan” and on 9/11 it was attacked by rogue terrorists that only wanted to hurt the US because of its “freedom and democracy.”

Obama, the Nobel Peace Prize Winning War Criminal has bombed at LEAST seven countries: Afghanistan, Iraq, Libya, Pakistan, Syria, Somalia, and Yemen. I would really like to know who or what chose these fights for Obama? Did some random homeless guy from Hoboken phone him up one day and say, “Hey, Prez, I choose Libya for you to destroy, next?” I more suspect the “fights” are always chosen by the Military Industrial Complex–which includes Wall Street and the fake corporate media.

What Obama is implying is that the United States of America, the Empire which spends over a trillion dollars every year to maintain the largest military force and WMD in history, is actually somehow acting in self-defense in ANY of the above countries? Interestingly enough, though, his actions over the past eight years have gone a long way to harming relations with two nations that may actually have some capacity to fight back: Russia and China.

I cannot in actual fact wait until I don’t have to regularly hear Obama’s smarmy voice anymore, but that doesn’t mean that I do want to start to hear Trump’s smarmy voice either. The thing that is the most aggravating aspect (to me) about Obama’s two terms is that he was able to (and brag about it) bomb seven countries without any large-scale opposition.

Trump has over a month left before he straps himself into the puppet strings of the x-rated (for gratuitous violence) Imperial Punch and Punch show, and he is already being opposed.

For example, Trump got every liberal all clutching their pearls with chagrin when he tweeted about prison time for flag-burners, when Hillary Clinton TWICE sponsored that same legislation (the Flag Protection Act) when she was a senator–without the same pretend vapors from the “left.”

The liberal world went “pearl clutching crazy” again this week when President Elect Donald Trump accepted a phone call from the President of Taiwan Tsai Ing-wen, because this is such a HUGE affront to China–when these same pearl clutchers never even blinked an eye only a few days earlier when the biggest arms dealer on the planet, Obama, closed a deal to sell 1.83 bn worth of arms to Taiwan. I suspect the newly outraged liberals had never even heard of Obama’s Asia Pivot, either.

I don’t know how to end this article, because the Ghoulish Legacy of Barack Obama will never end for the lifelong pain of those that had loved ones murdered or were maimed by his regime.

I know, because my own son was killed by an earlier version of Obama’s foreign policy that had manifested itself in George Bush and the war that Obama promised to end, but never quite did.

Because, the rivers of blood spilled and the untold number of lives ruined are Obama’s true legacy that most in this country never personally see, so they must concentrate on votes stolen by Russia or tweets tweeted by Trump.

My motto since my son was killed has ultimately become: “Never forget, but always move forward.” With the ending of another  “error,” and the beginning of the next one, I hope the integrity of the movement matures to opposition to Empire, not the fake media outrages du jour.