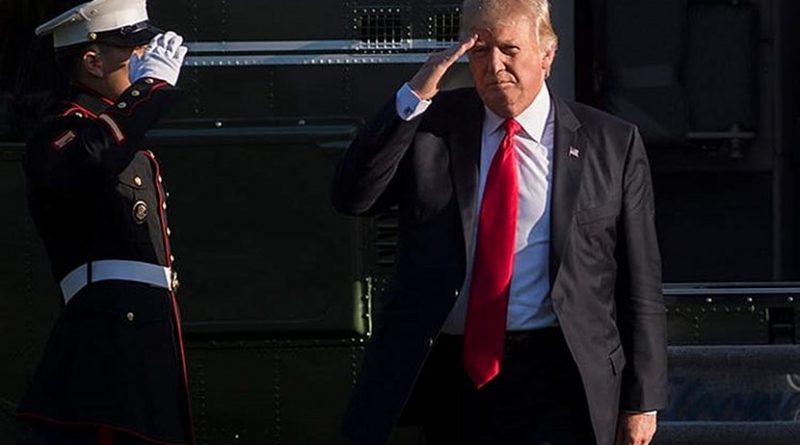 Donald Trump’s abrupt decision to withdraw American troops from Syria was reportedly made during a telephonic conversation with the Turkish President Erdogan on December 14, before President Trump made the momentous announcement in a Tweet on Wednesday, December 19. The decision was so sudden that even the Turkish president was caught off-guard, according to a December 22 Associated Press report [1] by Matthew Lee and Susannah George.

Clearly, an understanding has been reached between Washington and Ankara. According to the terms of the agreement, the Erdogan administration released the US pastor Andrew Brunson on October 12, which had been a longstanding demand of the Trump administration, and has also decided not to make public the audio recordings of the murder of Jamal Khashoggi, which could have implicated another American-ally the Saudi Crown Prince Mohammad bin Salman in the assassination.

And in return, the Trump administration has given a free hand to Ankara to mount an offensive in the Kurdish-held areas in northern Syria, though for the time being the Turkish president has delayed the offensive against the Kurds until the nitty-gritty of the deal is settled in a planned Trump-Erdogan meeting in Washington in January.

The reason why the Trump administration is bending over backwards to appease Ankara is that President Erdogan has been drifting away from Washington’s orbit into the Kremlin’s sphere of influence. Turkey, which has the second largest army in NATO, has been cooperating with Moscow in Syria against Washington’s interests since last year and has placed an order for the Russian-made S-400 missile system, though that deal, too, has been thrown into jeopardy after Washington’s recent announcement of selling $3.5 billion worth of Patriot missile systems to Ankara.

Regarding the murder of the Saudi dissident Jamal Khashoggi at the Saudi consulate in Istanbul on October 2, more than anything it was the timing of the assassination and the political mileage that could be gained from Khashoggi’s murder in the domestic politics of the United States that prompted the mainstream media to take advantage of the opportunity and mount a smear campaign against the Trump administration by publicizing the assassination.

Jamal Khashoggi was murdered on October 2, when the US midterm elections were only a few weeks away. Donald Trump and his son-in-law Jared Kushner in particular have known to have forged close business relations with the Saudi royal family. It doesn’t come as a surprise that Donald Trump chose Saudi Arabia and Israel for his maiden official overseas visit in May last year.

Thus, the corporate media’s campaign to seek justice for the murder of Jamal Khashoggi was actually a smear campaign against Donald Trump and his conservative political base, which is now obvious after the US midterm election results have been tallied. Even though the Republicans have retained their 51-seat majority in the Senate, the Democrats now control the House of Representatives by gaining 39 additional seats.

Clearly, two factors were mainly responsible for the surprising defeat of the Republicans in the US midterm elections. Firstly, the Khashoggi murder and the smear campaign unleashed by the neoliberal media, which Donald Trump often pejoratively mentions as “Fake News” on Twitter, against the Trump administration.

Secondly, and more importantly, the parcel bombs sent to the residences of George Soros, a dozen other Democratic Congressmen and The New York Times New York office by Cesar Sayoc on the eve of the elections. Although the suspect turned out to be a Trump supporter, he was likely instigated by shady hands in the US deep state, which is wary of the anti-establishment rhetoric and pro-Russia tendencies of the so-called “alt-right” administration.

Moreover, on November 29 President Donald Trump abruptly cancelled a planned G20 meeting in Buenos Aires with the Russian President Vladimir Putin. Although the ostensible reason for cancelling the meeting cited in Trump’s tweet was a recent naval standoff in which the Russian forces had seized three Ukrainian ships, the real reason was a report published in The Guardian two days before the event on November 27.

In the article titled “Manafort held secret talks with Assange in Ecuadorian embassy” [2], the author of the report Luke Harding alleged that Donald Trump’s former campaign manager Paul Manafort had held secret talks with Julian Assange inside the Ecuadorian embassy in London in 2013, 2015 and in March 2016, and several months later, WikiLeaks released a stash of Democratic emails allegedly stolen by Russian intelligence officers.

Although the report was dubiously sourced and its author lacks credibility, Paul Manafort had already accepted a plea deal. If he goes a step further and accepts the charges leveled against him by The Guardian – which is quite likely since Special Counsel Robert Mueller is already applying immense pressure on Manafort by alleging that he has violated the terms of his plea deal by lying – this scandal has the potential of stirring up a political storm which might eventually culminate in initiation of impeachment proceedings against Donald Trump for colluding with a foreign government to steal the 2016 US presidential elections.

This is the reason why President Trump was apparently advised by his close aides to keep maximum distance from the Russian President Putin until the dust settles down on the Manafort-Assange affair.

Notwithstanding, it would be pertinent to note here that regarding the Syria policy, there is a schism between the White House and the American deep state led by the Pentagon. After Donald Trump’s inauguration as the US president, he had delegated operational-level decisions in conflict zones such as Afghanistan, Iraq and Syria to the Pentagon.

The Secretary of Defense James Mattis and the former National Security Advisor H.R. McMaster represented the institutional logic of the deep state in the Trump administration and were instrumental in advising Donald Trump to escalate the conflicts in Afghanistan and Syria.

They had advised President Trump to increase the number of American troops in Afghanistan from 8,400 to 14,000. And in Syria, they were in favor of the Pentagon’s policy of training and arming 30,000 Kurdish border guards to patrol Syria’s northern border with Turkey.

Both the decisions spectacularly backfired on the Trump administration. The decision to train and arm 30,000 Kurdish border guards infuriated the Erdogan administration to the extent that Turkey mounted Operation Olive Branch in the Kurdish-held enclave of Afrin in northern Syria on January 20.

Remember that it was the second military operation by the Turkish armed forces and their Syrian militant proxies against the Kurdish-held areas in northern Syria. The first Operation Euphrates Shield in Jarabulus and Azaz lasted from August 2016 to March 2017.

Nevertheless, after capturing Afrin on March 18, the Turkish armed forces and their Free Syria Army proxies have now set their sights further east on Manbij, where the US Special Forces are closely cooperating with the Kurdish-led Syrian Democratic Forces, in line with the long-held Turkish military doctrine of denying the Kurds any Syrian territory west of River Euphrates.

Thus, it doesn’t come as a surprise that President Trump replaced H.R. McMaster with John Bolton in April; and in a predictable development on Thursday, James Mattis offered his resignation over President Trump’s announcement of withdrawal of American troops from Syria, though he would continue as the Secretary of Defense until the end of February till a suitable replacement is found.

It bears mentioning that unlike dyed-in-the-wool globalists and “liberal interventionist” hawks, like Barack Obama and Hillary Clinton, who cannot look past beyond the tunnel vision of political establishments, it appears that the pacifist isolationist Donald Trump not only follows news from conservative mainstream outlets, like the Fox News, but he has also been familiar with alternative news perspectives, such as Breitbart’s, no matter how racist and xenophobic.

Thus, Donald Trump is fully aware that the conflict in Syria is a proxy war initiated by the Western political establishments and their regional Middle Eastern allies against the Syrian government. He is also mindful of the fact that militants were funded, trained and armed in the training camps located in Turkey’s border regions to the north of Syria and in Jordan’s border regions to the south of Syria.

Quoting the retired US Brigadier General Anthony Tata on Thursday, Donald Trump tweeted: “General Anthony Tata, author, ‘Dark Winter.’ ‘I think the President is making the exact right move in Syria. All the geniuses who are protesting the withdrawal of troops from Syria are the same geniuses who cooked the books on ISIS intelligence and gave rise to ISIS.'”

Under the previous Obama administration, the evident policy in Syria was “regime change.” The Trump administration, however, looks at the crisis in Syria from an entirely different perspective because Donald Trump regards Islamic jihadists as a much graver threat to the security of the United States than Barack Obama.

In order to allay the concerns of Washington’s traditional allies in the Middle East, Israel in particular, the Trump administration has conducted a few cruise missile strikes in Syria, but those isolated strikes were nothing more than a show of force to bring home the point that the newly elected President Donald Trump is an assertive and powerful president, but behind the scenes President Trump has been willing to cooperate with the Syrian government and its backer Russia in order to defeat the Islamic jihadists who were portrayed as “moderate rebels” by the mainstream media.

Finally, up until now Donald Trump was playing softball with the Pentagon and the foreign policy bureaucracy, but after the humiliating defeat in the US midterm elections and clear hand of the deep state and corporate media in it, Trump has apparently decided to play hardball. This is the reason why he has announced the withdrawal of 2000 American troops from Syria, and the decision to scale back American presence in Afghanistan by 7000 troops is reportedly also in the offing.