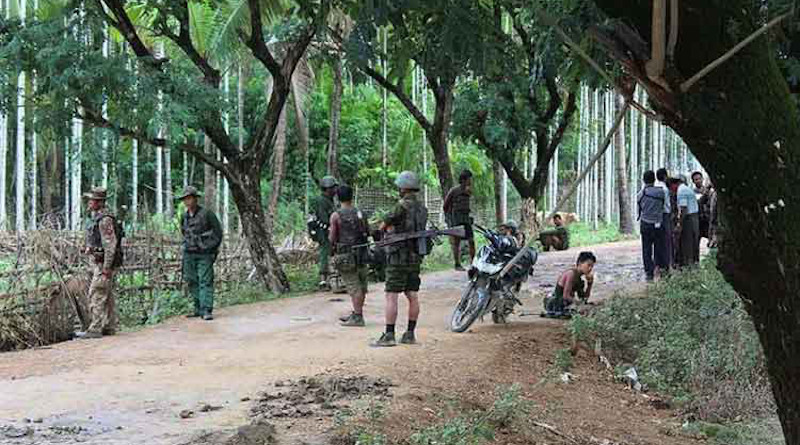 In the post election scenario two distinct strands are seen but surprisingly both appear to be mutually exclusive. A third development that is noticed is that the Army’s relationship with the civilian authorities appears to have worsened after the elections.

Though the Civil authorities are not involved, the Army has run into a major spat with a demand for full data on the just concluded Election. The Union Election Commission has rightly rejected the demand as unconstitutional. But the Army has not given in.

That said, the Army’s cooperation is very necessary for the Government- for its twin objectives of reconciliation with the Ethnic Armed Organisations and the Constitutional Reforms. More on this later.

Tatmadaw’s talks with the Arakan Army

It has come to light that Representatives of the Tatmadaw and the Arakan Army met near Pangshang, the capital of Wa Group on December 10.  The Arakan Army Spokesman confirmed that the meeting did take place and it centred around “Peace and Election Affairs to ensure a bilateral cease-fire.  The Government is seen not to have been involved in the talks.

Though the two sides ostensibly met for conducting the elections for the nine townships in the Northern Rakhine, the ultimate objective appears to be to workout a suitable and durable cease-fire between the two sides. It is surprising that the Civilian Government is not involved in the talks.

It may be recalled that it was on the specific orders of Suu Kyi that intensive operations were initiated by the Myanmar Army.  There are also reports that the Government of Suu Kyi is not willing to conduct the elections in the nine townships where no election took place on reasons of security.

The lack of enthusiasm on the part of the Government is also surprising, though it is certain that NLD may not fare as well as it did in other regions.  This could not be the reason, however, to deny the voters in the nine townships to vote at all.

It is also interesting to see that the talks took place at Pangshang the Hdqrs. of the UWSA an entity close to the Chinese and not in Kachin area where the Arakan Army had its headquarters near Laiza.

There is a suspicion that Chinese arms meant for the Indian insurgents are also routed through the WA and the Arakan Army.  It is therefore in India’s interest that a cease-fire takes place in the region where a major Indian connectivity project to Myanmar is in progress.

On November 12, in another initiative the NLD sent an open letter to all the 48 ethnic parties in number promising to meet their aspirations and sought their cooperation in creating a democratic Federal Country. This was done after the meeting of the Central Executive Committee at Naypyithaw decided to form a member Party Committee to hold talks with the Ethnic Parties.

The Tatmadaw (Myanmar Army) is not seen to have been involved in this initiative. The NLD Party Spokesman Dr. Myo Nyunt told the media (Frontier) that they want cooperation with all the ethnic people and will pay attention to their aspirations.

A similar initiative was taken by the NLD soon after a landslide victory in 2015 elections, but it fizzled out within a few months due to lack of trust from both sides.

This time the effort appears to be more serious and sincere. It all depends on what proposals the NLD are going to put forth to seek genuine reconciliation. It is also necessary to take the Army on board as any change in the Constitution needs the Army’s help. The initiative has been largely welcomed by the ethic groups though some are yet to be convinced that the Ruling Party is now willing to change.

This is particularly so for two ethnic groups that have performed well in the two regions. These are the ANP (Arakan National Party) and the SNLD (Shan Nationalist League for Democracy).  12 Ethnic Parties have positively responded and Dr. Myo Nyunt had said that the first round of talks will be with the Parties that have formally replied. He added that the main initiative is to reach a consensus on the shape of federal Union of the Country.

The first test of the Ruling party’s sincerity will be in choosing the Chief Ministers in Provinces where the NLD is not in a majority. (Article 261 of the Constitution). Is the NLD still afraid of the smaller parties allying themselves with the Army Representatives to a “military-aligned regime?”  It does not appear to be so.

The Army appears to be still smarting on the loss of its proxy the USDP in the elections. There are definite rules and regulations for the Parties to approach the Union Election Commission to file their complaints.  Instead, the USDP is using the Army to demand full data of the results of the Elections.

It looks that the Army Chief is doing some shadow boxing just to test the Government. Is the Chief looking for an extension beyond the mandatory retirement age? It could be so and if so the NLD should not fail to ask for its pound of flesh.